I've seen tons of screens and read lots of articles, but PSN had a brand-new demo up so I gave that a whirl… The gist of the game is that you're a soldier from the Unreal school of how-do-you-move-in-that-armor? character design and you've got a gun that can affect change in the landscape tectonically. With a shot from your high-tech gee-whiz machine, you can raise small hills or create sinkholes, among other things. 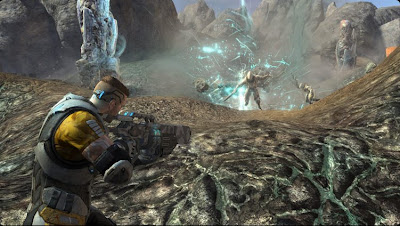 It looked pretty, but it played just like I expected; gimmicky and sort of generic. I realize this was just a demo, but every aspect of it screamed "$20 weekender" to me. Some running, some gunning, and some use of the dirt-powers to get to pre-arranged pathways that are inaccessible without a mound of soil to jump off from. The dirt powers only affect areas of exposed soil, so I'm expecting lots of concrete and metal floors to limit where the gun can hit the earth, and in the first area alone there was a hyper-gimmicky platform that conveniently needed a rising pillar of molten rock to lever it into position in order to create a ramp to walk on.

There could be more to it later on, but like I said… my money says it's a $20 weekender.

Yeah I can go with what you’re saying; I had similar feelings myself when playing the demo. The gimmick of being able to manipulate dirt (which in itself, is laid out in a linear fashion overall) will likely get really old really fast, and the combat doesn’t feel quite as refined as something like Gears of War. Even the visuals – the one aspect of the game that have consistently seemed impressive – actually failed to wow me much. I guess it’s just all that “been there, seen it before” stuff that goes through your head every-time we fire up… Read more »