The Steam Controller and Steam Machine

Recently, Alienware sent a Steam Machine to Gamecritics for evaluation and I spent some time putting the thing through its paces. You can read my initial assessment of the unit and the accompanying Steam Controller here. However, moving the PC into the living room is kind of a big deal, and while I personally thought it was a great idea, it's important to get multiple perspectives. Alienware agreed, and they encouraged me to invite friends over to get hands-on with the machine to see what they thought.

Full disclosure: the review unit was provided free of charge by Alienware, and they also provided the food and drinks for the gathering as well.

So, in order to see what other people thought of the tech, I invited some friends over:

And freelancer Steve Haske (@AfraidToMerge) who is basically some dude that lives a few blocks away.

Prior to everyone arriving, I fired up the box and gave it enough time to install any updates that were required for the games on the hard drive, or for Steam. I had also downloaded a selection of games that both did and did not support Steam OS. Although we did have wired Xbox 360 controllers available, we used the Steam controller for everything in order to really get a feel for how the whole setup would work. 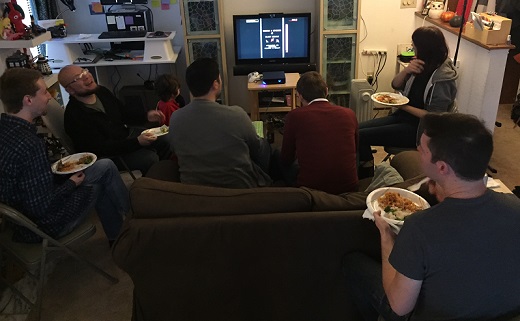 Once we got rolling, the biggest and most immediate impression came from the controller itself — and it wasn't a particularly good one. Curiosity about the odd beast was high, and everyone was in agreement that the buttons on the underside of the controller were genius, but the rest… Well, let's just say there wasn't much love there. Everyone present was highly experienced with games, and a common theme was that they felt as clumsy as if they'd never played a game before when using the Steam controller. Trying to manipulate touchpads in place of the standard dual analog sticks is mindbending.

Apart from the highly unusual physical makeup of the controller, we quickly ran into the issue of trying to use it with titles that didn't support controllers, or those that didn't natively support the Steam controller specifically.

We initially spent quite a bit of time trying to map each part of the controller to our own preferences, but it's a fairly lengthy process and everyone lost patience with it quickly after only achieving mixed results — the most humorous when we thought we had everything squared away, only to find that we had no way to move our character while zombies were tearing us apart in L4D2. 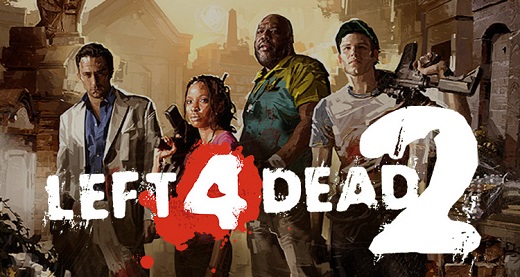 Their lives depend on your configuration

Fortunately, after digging around in the menus, we found a number of "preset" options which are available for each game, submitted by people already using the Steam controller. These presets are also ranked by the number of people who actually use that setup, so picking something at the top of the list with a large number of users usually provided a satisfactory result. However, it was still a few steps too many, and a process that needed to be repeated every time we changed games.

As far as the Steam machine itself went, it didn't make much of an impression at all, but I mean that in the best possible sense. Everyone remarked that it looked just like a regular console, and then it totally fit right in with the other videogame systems in the room. There was no obvious differentiation between the Steam Machine and a PS4 or Xbox when the games were running, and I think that speaks towards the success of the compact design and successful integration into living room.

However, the sticking point that we encountered was when trying to play games which did not support Steam OS. For those that do, it's easy: the game downloads onto the machine just like any other download title and plays with no problem. However, games without the OS support must be streamed from a nearby PC.

While the streaming was largely fine on a wired connection (wireless had some very noticeable hitching in stuttering) it begs the question why someone with a PC capable of streaming would want to have the Machine in the first place – it seems smarter to buy a Steam Link and skip the extra box altogether. Of course, it seems as though Steam OS is being supported by the majority of games at the current time, so this was only an issue when we tried older games… but it was still an issue.

Another thing that came up was that the Steam Machine offered too many options. Most people who showed up to check it out expected it to start a game and play with the same level of ease as you would expect with a PS4 or Xbox, and while that was the case with Steam OS games downloaded onto the hard drive, it wasn't the case with everything.  If a non-Steam OS game was chosen, then the option of whether to stream came up (and there were a series of related steps that popped up depending on which game it was) and games that didn't support the Steam controller required the process of trying to configure it.

Ostensibly, it seems like the Steam Machine is aimed at people who want the ease of a console, but with access to the wealth of games available on PC. If they're already avoiding playing on PC, then having all the extra steps seems to defeat the purpose of creating something that is essentially meant to be a console.

Many of us, myself included, were also concerned that the Steam Machine might be left behind as PC games inevitably push their technical edge forward in the next few years. Fortunately, Alienware PR says the Machines are able to be upgraded as the need arises. More details to come on that front.

However, despite the problematic aspects of the Steam Machine, everyone present was convinced that playing PC games on a living room TV while on a couch was a great idea and one whose time has come. 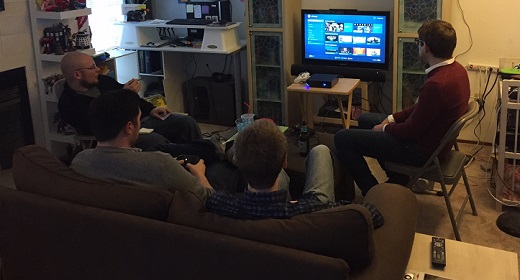 Before we wrapped up the evaluation, I asked everyone for their individual thoughts.

Chris: I'm sold on the box. I'm not generally a PC guy, so this seems right up my alley. I hate the controller, though.

David: I'm a gadget guy and I like the form of the unit as well as having the novelty of PC games in the living room, but there are too many variables. As far as the controller goes, I could see it working for certain games or games that were specifically designed around the controller itself.

Ryan: The number of games which don't support steam OS was an issue today, and I'm wondering how optimized games running on the Machine would be in the future. It seems to me like the Steam Link would be something I'd be more interested in. As for the controller, I want to give it more of a chance. The touchpads are bit odd and I think the design need some tweaking, but I want to explore it further.

Steve: I agree with everyone that the box's operations should be simplified, but at the same time I do like having extra options — it's a bit of a paradox. I do think the UI is really good, though. As for the controller, I hate it. Would I buy the machine myself? No, I'm going to stick with consoles.

Great idea for an article, and an enjoyable follow up to the original article. I get the impression that the setup options for the controller etc would be much simpler in a normal environment where you’re not trying to play 6 games in an evening. You’d buy a game and do the setup for that and not really have to bother about it until the next game came along. In that sense, it sounds like they have navigated a potential source of annoyance pretty well. I’m an occasional PC gamer, and have gamed using Steam’s Big Picture mode on my… Read more »