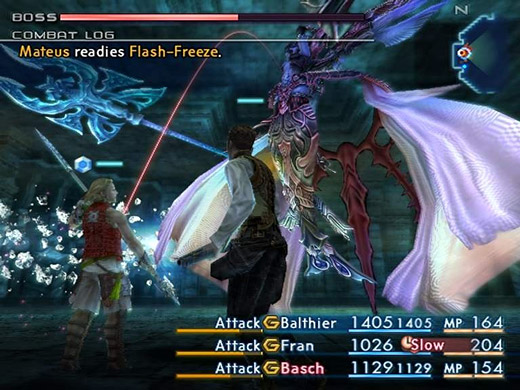 In other game news, I have to say that in spite of all the different blunders Sony has committed since launching the PS3, one thing that they've actually done well is the connectivity between the PS3 and the PlayStation Portable. I expected all kinds of hassle, but it was totally simple and painless. They get points for that, if nothing else. Speaking of which, I downloaded Crimson Room Reverse last night and was messing around with it for a few minutes.

I had never heard of it before but, from what I understand, the entire premise is that the player is trapped inside a room, and must search around for different items in order to solve puzzles and earn their escape. My interest was piqued immediately, though I must admit that after actually starting the game, I had no friggin' clue what was going on. I didn't even make it through the tutorial. Granted, I was half asleep when I tried, so I will definitely down a few cups of coffee before my next attempt.

Getting pretty close to the 30-hour mark and I'm still enjoying the game quite a bit. It's probably the most pleasant Final Fantasy experience I've had since Final Fantasy X, but as the game goes on, more and more of its warts are starting to show.

For example, when story events that move the plot forward are happening with a reasonable amount of frequency, the game really picks up a lot of energy and starts popping nicely. However, there have certainly been a few twists and turns that feel like they are included for no reason other than making the game longer. Foremost in my mind, taking a side trip to the village of the Viera (as visually pleasant as it may have been) and the resulting trip to the mine immediately afterward. Neither added anything to the experience or the story, and my interest started to flag a bit during those sections. The story itself is good enough that I don't really feel the need (or desire, really) for extra doglegs slowing things down.

Another downer, I finally hit the first section of the adventure where I felt like I sincerely needed to grind in order to progress. Bosses that inflict multiple status ailments at once or who have some other sort of "gimmicky" attack really grate on my nerves. Considering that money for gear is generally pretty tight and that players have to "buy" Licenses with earned points in order to equip certain weapons/armor/skills, that makes cheesy boss encounters extra annoying in Final Fantasy XII.

Upon getting to a certain area, the boss on duty had an automatic "Slow" effect on any players wearing metal armor. I had no way of knowing this of course, and naturally, my entire team was kitted out in metal. The answer? Grind out some dollars and buy different armor. The boss immediately afterwards was an Ice-themed 5-on-3 battle that was a struggle until I took the time to earn some more License points and activated a few skills that I hadn't previously unlocked. It wasn't a terrible ordeal, but the game basically ground to a halt while I took care of this busy work.

I get that the adventure wouldn't be nearly as entertaining if every boss was a cakewalk, but it's a little more work than usual to deal with these kind of wrenches in the gears. Tough fights are one thing—fights that make you completely rearrange your team and your tactics with this kind of leveling system are something else. Fingers crossed that these kinds of situations don't pop up too often from here on out… Mass Effect 2 comes out in about three weeks or so, and if I haven't freed Ivalice by then, Final Fantasy XII is going to find itself on the "I'll get back to ya" shelf.

“However, there have certainly been a few twists and turns that feel like they are included for no reason other than making the game longer. Foremost in my mind, taking a side trip to the village of the Viera (as visually pleasant as it may have been) and the resulting trip to the mine immediately afterward. Neither added anything to the experience or the story, and my interest started to flag a bit during those sections. The story itself is good enough that I don’t really feel the need (or desire, really) for extra doglegs slowing things down.” Actually both… Read more »

The worst being FF8 and FFX, FF7 still had that feel of whimsy to it and FF9 was the best FF to date as far as equipment,classes and skills and sine the last few have sucked so even prehaps characters. FF12 dose not have horrible characters or story and it has damn good level design but that’s about all the good I can say about it other wise its medicore story crappy equipment broken skill system that makes it feel like a one way bland MMO. As if FF8 and even FFX to some degree was not bad enough with… Read more »

Stick with the game and before you know it the clock will read 80 to 100 hours!! I found the trick to staying strong in this game is to mini-grind. Spend an hour or 2 in each area (Giza Plains for example) killing monsters and completing your monster inventory for the area, also doing the monster hunts at the same time as playing the main story part of the game will benefit enormously and if you find rare game steal from them before killing them as they will usually give you very power weapons or armour if not then loot… Read more »

>Anony Mouse >>>>”It’s probably the most pleasant Final Fantasy experience I’ve had since Final Fantasy X” >>That’s not saying much, since to many, FF X was the last “legitimate” game in the FF canon. Heh, sorry. I should have been more clear, sorry about the confusion. What I MEANT to say by that was probably something more along the lines of: “FFXII is probably my second favorite FF game, behind only FFX.” . . . . . . >Coyls >>to me FFXII seems more like a western rpg than a jrpg. I think that’s what I like about it. JRPGs… Read more »

to me FFXII seems more like a western rpg than a jrpg. There is more focus on exploring mines, temples, and ruins,along with a lot of back tracking, where as most good jrpgs focus more on story with linear gameplay. It takes another page from western rpg’s in the way any character can be equiped with any piece of equipment or learn any spell, and also by making the player buy absolutely everything. What ever happened to the days when characters actually learned spells and skills. I mean it’s bad enough that I have to buy weapons, armor, gambits, items,… Read more »

That’s not saying much, since to many, FF X was the last “legitimate” game in the FF canon.

Quite a coincidence here. I started Final Fantasy XII after playing it on and off and starting multiple new games ever since it was released, but now I truly plan to finish it. I’m actually right at the part you are now and I’m absolutely loving the game. But it’s a type of love that’s different from past Final Fantasy games for me. My past favourites have been VII and VIII, and I love them for similar reasons (mainly nostalgia and the music), but with XII it’s different. I absolutely hate the music (sorry Sakimoto), the lack of controllable non-Hume… Read more »

Don’t give up! Best Final Fantasy ever. As in rewarding JRPG loot fest with some crazy awesome bosses (hunts) to take out later in the game. Story is pretty average though. Nice and all but that game was all about the hunts for me.

…well, get loot, which translates into money…and an occasional rare weapon.

Put one of your characters 1st gambit to steal, enemy hp = 100. You will get lots of money this way. I was in the same position you were, but this really helped me out.

hehe… well, i got past the miriam (sp?) temple and defeated the boss after that as well, so i’m back on track. i’d like to think i’m over the cheap-o hump since i have most of the augments by now, but we’ll see… ; )

It’s going to be hilarious if you stop at the same spot that Trent and I did.

…with a little bump n grind.