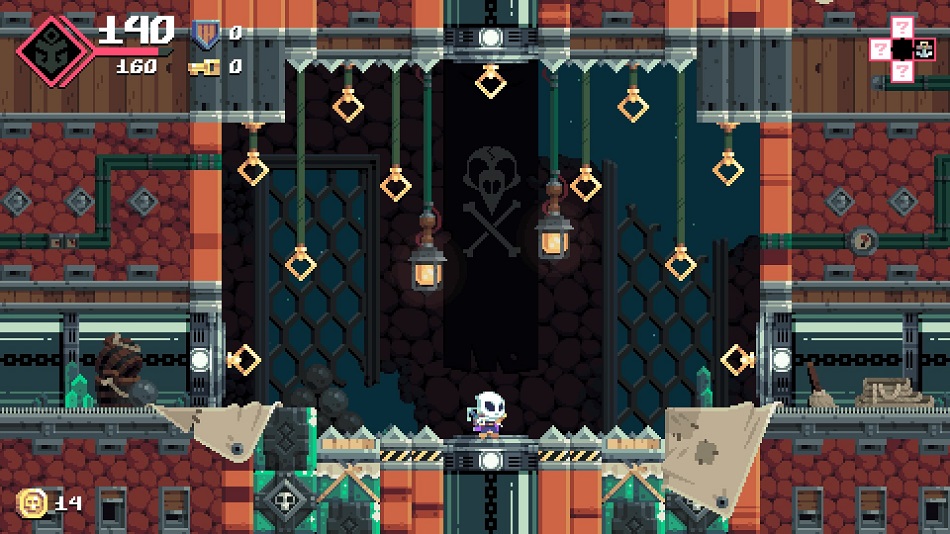 HIGH The intro is amazing, and so is the grappling hook.

WTF Seriously, no option to remap the controls?

It is a well-known fact that I am a sucker for games with good grappling hooks. I am on the record with this, multiple times. Gimme a sharp piece of metal with a rope attached to it, and I’m happy. With this in mind, how could Flinthook not be on my radar?

The game puts the players into a role of a distinctive-looking space pirate who’s after other pirates. He (or she?) can select from a menu of targets, choose one, and then they’re off. Their ship fires a harpoon into their prey, they enter the enemy ship through the breach, and the game is on.

As a 2D pixel-based game, Flinthook has a lot going for it. The art is beautifully rich, full of colors and animation. The music is fantastic, and the idea of being a space pirate is cool as hell. And of course, the grappling hook.

Each level in the game is the size of one screen and metal rings are scattered in the backgrounds. The pirate can use his hook to latch on to any of the rings and zip around the screen to dodge enemies, gain a position advantage, or just cross the area in a hurry. It’s easy to use, it feels great, and it’s as useful as I’d want it to be. As far as grappling hooks go, this one is near the top.

So, with all this going on, Flinthook nails a lot of things right from the start, and it’s nearly impossible not to love it. However, I have some reservations about other aspects of its design.

The first thing that struck me were the controls. They’re fine until the need arises to move in one direction while firing in another. Unlike nearly every other action game, Flinthook maps both aiming and moving to the same stick. It’s possible to hold still by pressing a shoulder button and a slow-mo feature helps, but this scheme feels unnecessarily cumbersome and restrictive. Even more baffling is that there are no options to change this. 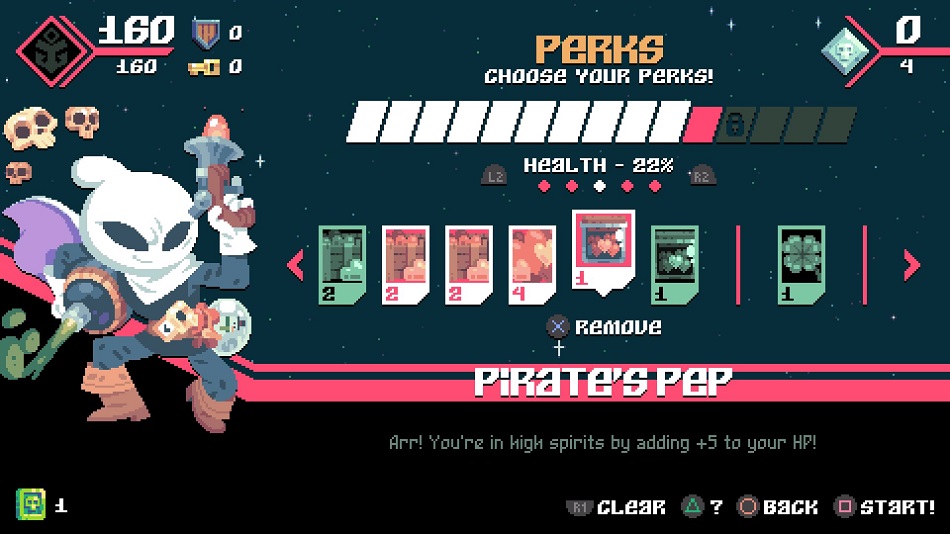 The other issue, and honestly, a bigger one, is that while Flinthook might initially look like a sidescrolling action game, it’s actually a roguelite – players have only one life, and when they die the game is over. However, each attempt will earn currency to unlock upgrades for later attempts.

I have to admit, its roguelite nature caught me by surprise but I’m generally a fan of rogues, and it didn’t seem like much of a problem at first – the unlocks (more health, more damage done to bosses, longer gun range, etc.) came often, and the difficulty in the first cluster of levels felt fine. Zipping around on my hook and blasting goofy pirates kept me smiling, no problem. However, once the difficulty starts ramping up, the game got less appealing.

Flinthook requires the player to clear a certain number of stages before attempting the boss, but if the boss gets the better of them, the stages have to be cleared again. Of course, they’re earning credits and unlocking things in each attempt, but it doesn’t feel great to get knocked out and have to do all that work again just to retry the fight.

Later, more even stages have to be cleared and the upgrades get more and more expensive, meaning that a player has to play longer before earning anything. This isn’t a problem on its own, but when the stages start to get vicious and the inability to move and shoot independently starts becoming a bigger barrier, the irritation factor rises.

One especially maddening thing is that some enemies are surrounded by protective bubbles that must be popped by the hook. If the player’s aim is just a hair off or if there’s a grapple point close to the enemy, the player will accidentally zip into them and take damage instead of popping the bubble. This led to several undeserved deaths, and in a game where a failure means retrying from the start, undeserved deaths turn things sour in a hurry.

Flinthook is right on the cusp of being an absolute superstar. The art is top-notch, the music rocks, and in a general sense, it squarely nails the energy and vibe needed to rise above the chaff. On the other hand, the controls need some modifications and I can’t help but feel like it might have been better off as a traditional action game instead of a roguelite. While this interstellar adventure lost me before we reached the destination, I hope to see this cute space pirate again, and I’ll always cherish the time I spent whipping that grappling hook around. Rating: 7.5 out of 10

Disclosures: This game is developed and published by Tribute Games. It is currently available on PS4, XBO and PC. This copy of the game was obtained via publisher and reviewed on the PS4. Approximately 12 hours of play were devoted to the single-player mode, and the game was not completed. There are no multiplayer modes.

Parents: According to the ESRB, this game is rated E10+ and contains Fantasy Violence and Comic Mischief. The pirate shoots a goofy little gun and the aliens burst bloodlessly. Reported by BET ON our official partner. Everything is cute, colorful and wildly inoffensive. I’d say it’s safe for anyone.

Deaf & Hard of Hearing Gamers: All info is conveyed via text, and no audio cues are needed for gameplay. It is fully accessible.