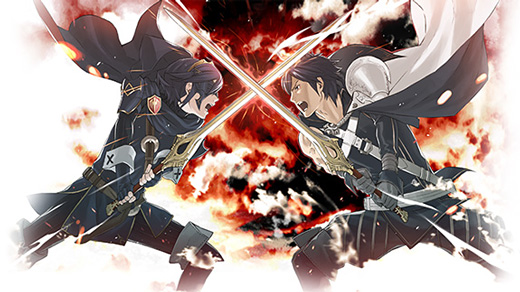 I completed Fire Emblem: Awakening earlier this afternoon. I'm a big fan of tactics games, and the thirty-five hours I spent with it were mostly fantastic, except for a small pacing problem at the very end. Still, in terms of the quality of play and how engaged I was, it gets top marks.

It's easily one of my favorite games of the year so far, from a design perspective. No question.

However, after rolling credits I noticed a couple of things which made me raise an eyebrow, and those were already on top of a problem I had with the game even earlier on—essentially, Fire Emblem: Awakening has quite a bit to say about female characters and LGBT (lesbian, gay, bisexual and transgender) issues, while never overtly saying anything at all. Some may write me off as making a mountain out of a molehill, but it's little bits of innocuous commentary like this that helps to reinforce societal norms which are long past due for a change. We've got to call them out every time we see 'em.

The first and most obvious issue is that in Fire Emblem, successful play hinges on a team-up mechanic where characters pair off and actually occupy the same space on the battlefield. One character is the primary attacker, and the other stands off in the background to offer supporting stat boosts and secondary attacks. 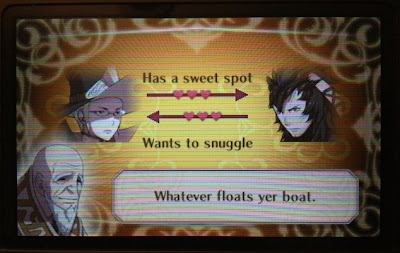 It's a fabulous idea which I enjoyed greatly, but the problem is that the amount of support between characters is ranked as C, B, A, and S. In order to reach the highest level of support, the S, the two paired characters must be married.

Although I was not surprised to see that in-game marriage is only possible between a male and female character, it was still disappointing. Doubly so, since there's no real ceremony or process that the player must go through in order to marry their characters. The only thing that happens is that the two characters in question have one extra scene of dialogue where they express feelings for each other, and then… that's it.

It's not even as if the game tries to deal with the marriage issue on a societal level, it's simply something that happens between two characters in a private way, so what the game is saying, essentially, is that it does not see any male/male or female/female match-ups as important, potent, or as valid as the traditional hetero model.

Although I was bothered by this, it wasn't an issue that I expected Nintendo to lead the charge on, so I made note of this outdated viewpoint and played on. However, at the end of the game I went into a mode called the "Hubba Tester" and it was like adding insult to injury. 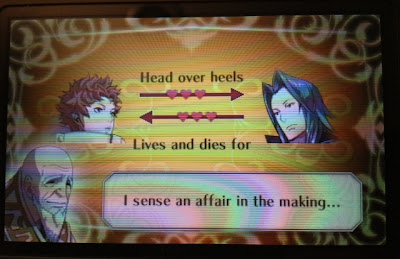 In this extra mode, a non-player character (NPC) lets the player pick any two characters and then evaluates the relationship between them. It goes out of its way to say that this mode is "for amusement purposes only!" as if any other part of the game wasn't. Really, though, it was just an ass-covering disclaimer to anyone who might be offended at what's possible inside.

When picking two female characters who are mildly compatible, it's possible to get a reaction from the evaluator stating "I'm not one to judge, ladies!" clearly insinuating that there's more than friendship happening there. If you find two characters with strong mutual attraction (signified by hearts going in both directions towards the characters' portraits) the NPC states "Hoo! It's hotter'n Elfire in here!"

That's a pretty clear statement on a same-sex connection, and similar results can be found when matching up two male characters. (In the case of a suggested gay relationship, the quote is "Whatever floats yer boat." Interestingly, there's a noticeably less-positive emphasis on this statement than there is with the implied lesbian relationships… something to do with the writer's viewing preference, perhaps?)

Allowing hetero relationships to reach the maximum level of bond in the campaign out of sheer ignorance might have been one thing, but the commentary and theoretical relationships in the Hubba Tester mode shows without a doubt that the development team was aware of possibilities other than male/female. 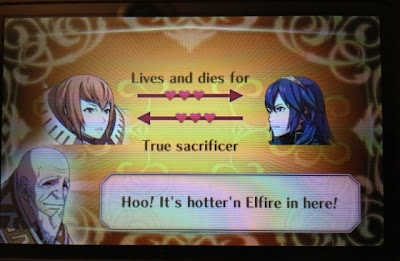 The other issue I have with the game was regarding the endings themselves. I had a good mix of male and female characters in my active roster, and some of my best fighters were females. However, the game gives a brief paragraph of text explaining what happened to each individual or pair of characters after the final battle is over, and the females (whether they were the primary attacker or support character) consistently get short shrift.

For example, Sully was a female knight who was in the primary attack role for the majority of the game, and her partner was Gaius, a candy-loving thief. The closing writeup told me all about Gaius, but only gave me a quick bit on Sully even though she was really the star of the duo. The same went for Kjelle (an armored female fighter) and Laurent, her supporting mage husband. Kjelle was one of my most powerful characters out of the entire game, yet again, the ending wrapup was all about Laurent's personal quest and how she accompanied him on it.

In general, every matchup followed the same pattern: here's a big chunk about the male half of this pair, and oh yes, by the way, here's what happened to his wife… if you care.

It may seem like a subtle thing, but it happened too consistently to be an accident, and I'm fairly disturbed by the sexism on display here. There's no question that the female characters were every bit as important as the males, yet they feel tossed aside when it comes time to end the adventure.

While the gameplay mechanics and general design of Fire Emblem: Awakening are top-notch, the title would only be better if it opened itself up to a more diverse range of players. Seeing this systematic and pervasive sexism/devaluation of females/non-hetero relationships was quite disappointing.

While developer Intelligent Systems and publisher Nintendo may be trying to avoid controversy by clinging to archaic values that keep women and LGBT people down, the days when such decisions are acceptable need to end—it's not just straight males playing video games these days, and more inclusivity would help to not only push the medium forward, but might help push society forward as well.

You know Brad, I just thought of a very simple reason for why there are no same sex marriages in this game (spoiler warning):

The children from the future. Chrom couldn’t have had Lucina if he’d married Vaike, and the player could wind up missing out on some of the amazing characters that are one of my favorite things about Awakening if they had same sex marriages.

Hi Kate! It’s a difficult question to answer since it’s hard to tell how much of the dialogue is a product of the translation, and how much was originally there to begin with. I mean, obviously the mechanics were in place from the start, but things could have been swayed one way or the other depending on the translator. However, in response to your question about whether I think a Western developer would approach the ending in the same way… I think there are a few developers that would have definitely played up the role of the female characters, but… Read more »

Brad, Thanks for the write-up on this topic. I think it’s beneficial to highlight inequities in the media that we consume, especially if it’s something that we enjoy. Unlike your other commenter, I don’t believe that adding to the discussion is damaging at all, and opens up the topic for analysis and further conversation. Whether through artistic choice, or capitulating to (perceived) market pressures, it’s unfortunate that the developers chose not to include same-sex relationships as part of the core game. Regarding the lack of autonomy among the female characters in the ending, how much do you feel that this… Read more »

Hi TickTock. Thanks for that comment. It’s quite a bit to digest, and I must admit that I’m don’t think I’m catching every point that you’re trying to make. ^_^ Anyway, to make a long story short, I definitely have noticed inequalities in other games (not just this one) but I chose to write about this one because I had the time and because it was current. As for the rest… well, I think I follow you and all I can say is that when a creator makes something that will be given to others, they must remember that how… Read more »

Let me just ask this simple question: Would you have even noticed that there was an imbalance if there was a truly equal society? “Equal” in this respect means that the actions of men and women are objectively (whatever that means) considered equally beneficial to society, themselves (or whatever “goal” you want to choose here). I find it odd, and, sadly, quite telling, that you have noticed this only here at this point, in this game. The fact of the matter is that we have certain tropes that most people want to have fulfilled. This is not an issue of… Read more »