From @NaviFairyGG over at GayGamer comes a brief interview with Jordan Thomas, one of the people currently working on the X-COM reboot.

In this piece, it's revealed that one of the characters is a closeted homosexual, and that the game will actually address this aspect of the script rather than having it be an interesting footnote divulged three years after everyone's forgotten about the game.

David Wong over at Cracked.com utterly nails it with a piece detailing the "six most ominous trends in video games". Despite the humorous slant, he's utterly spot-on with his observations. It's almost as though he's been reading my mind…

Apparently there's only one man in America who makes specialized controllers for quadriplegic gamers, and according to the article over at MSNBC, he may not be making them for much longer.

I haven't played L.A. Noire yet (and to be perfectly honest, I'm finding it quite difficult to marshal up the willpower to do so) but I found Tom Bissell's piece over over at Grantland to be both intimidatingly intelligent and highly interesting despite not being familiar with the subject firsthand.

I can only imagine those who played it will find it even more worthwhile than I did, and really, I did. 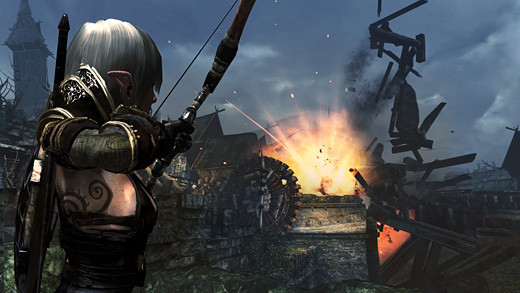 One final note for the night, the wife and I finally finished off Hunted: The Demon's Forge on 360.

Although in fairness we weren't able to jam on it every night and get it done like we had originally planned, it still took a hell of a lot longer than I had ever anticipated. I'm glad to have finally completed it though, and now that it's all been said and done, I really kind of liked it.

It's not perfect, though. It's easily two times longer than it should be and only half as polished as it deserves, but there's a good kind of energy happening here. Underneath the problems, I was able to connect with it.

However, I do want to qualify that statement by saying I think most of the enjoyment came from simply having a decent venue in which to play with my wife. If I had to go through the game solo, I'm pretty sure that I would have quit at least halfway, if not sooner.

With Hunted out of the way, I'll be moving on to Alice: Madness Returns (360) next. I'm a little concerned since I've been hearing it's also another lukewarm, problematic game that runs twice as long as it needs to, but that remains to be seen…

From website io9, a report that 2012 will not receive a full season of Doctor Who.

While I would ordinarily feel quite upset about this, my lack of enthusiasm for the current starting-to-fall-into-disarray-like-Heroes-did season mitigates the emotional trauma. The people behind the show right now need to get their ducks in a row before going on, so maybe slowing things down will get them back on track.

I like Tom Bissell’s writing; I think he’s good at expressing the anguish and conflicting emotions that arise out of being a smart sophisticated person on the one hand and a hungry consumer of mainstream video games on the other…but I think in that LA Noire review he’s trying too hard to love the game and overthinking it. The thing’s dead boring. The best thing about it is the costume design.

I read that same article a week or so back, and I have to say I felt that the only way it worked was if the reader were to focus on the big flaws of the gaming climate while ignoring pretty much everything else. The article even negates some of its earlier points with later ones. Complaining about game price, for instance, seems silly when in the same article it is mentioned that cheaper digitally distributed games are clearly on the rise. The $60 game IS behind the times, and the market is already adjusting. If no one has any… Read more »