Read All about It 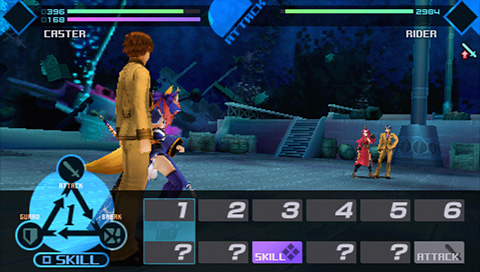 HIGH Getting through an entire dungeon without taking a single hit.

LOW Accidentally missing one item and destroying my hopes of 100% completion.

WTF Is up with that clown?

While excitement has been running high for the PS Vita coming in February, it's safe to say that the PlayStation Portable (PSP) has been dying of starvation—releases for Sony's original portable have been quite anemic for a while. However, Aksys is a publisher who's never given up on the handheld. In fact, they've been responsible for a number of high-quality PSP titles, and Fate/Extra is yet another from them that shouldn't be missed.

Although the game is apparently based on a popular anime license, I came to Fate/Extra knowing practically zero about it. In fact, I actually expected another solid fighting game, similar to 2009's Fate/Unlimited Codes. However, while the two titles do share the same source material, they are radically different in practice.

Rather than being another fighter, Fate/Extra is a hybrid title blending role-playing game (RPG) and Visual Novel genres. Since visual novels are essentially unknown to gamers here in the United States, it's easiest to explain them by saying that a huge portion of the genre's content is conveyed through text that the player must read (gasp!) However, while that still holds true here, the developers smartly marry the literate side to a structure that will be instantly familiar to any player that's ever spent time with a Japanese-style RPG.

For a game that places so much importance on dialogue and script, I'm happy to say that Fate/Extra doesn't disappoint. The story is set inside cyberspace, where a war for a wish-granting "Holy Grail" is taking place via elimination tournament. The participants are referred to as Masters, and each Master has a Servant who's a famous figure from history. These Servants do all the actual fighting, but the twist is that their identities are hidden in order to maintain the element of surprise in battle. Much of the game hinges on putting together clues that strip away opponents' anonymity.

Discussing further details of the plot would be akin to giving away the ending of a great book, so to preserve the quality of the experience for the player, I'll just say that Fate/Extra has several surprises up its sleeve. The characters are well-written, the quality of the writing itself is certainly above-average, and the twists and turns kept me wondering what would happen next. It had no problems keeping my attention, and as credits rolled, everything wrapped up to my satisfaction—a neat trick, indeed. 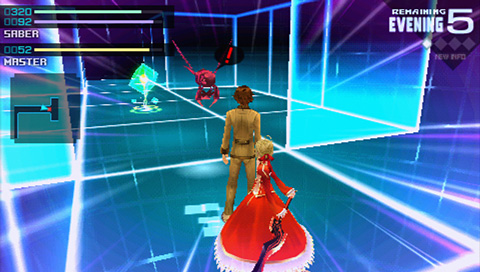 Interestingly, it's worth noting that the game has several story-related dead-ends if the player makes a wrong choice or performs an incorrect action—and when I say dead end, I mean that the game is over, full stop. It's an interesting approach that adds suspense knowing that there are several fail-states which are unrecoverable. To be fair, the game clearly warns players to keep multiple save files in order to avoid a story-ending catastrophe, and I second that advice wholeheartedly. I kept a total of five saves going at the same time, and thanks to that, I was always able to backtrack and make a different choice when I hit a bad end.

As the game develops and the player acclimates to consuming so much text, a great synergy between the plot and gameplay blossoms. Not only is discovering clues about enemy Servants important conceptually, but also in practice thanks to Fate/Extra's unusual rock-paper-scissors turn-based combat engine.

Without any information on an opponent, choosing between Attack, Block and Break is reduced to blind luck. In such a situation, the player can count on nothing but a swift defeat. However, with enough information gathered, the opponent's moves are revealed before each round of combat and the player can choose the correct countermove.

For example, after defeating a number of brutish Nephilim, the player is then able to see the order of its attacks. By breaking through defenses (paper covering rock) or blocking attacks correctly (rock crushing scissors) it's possible to clear out an entire dungeon without ever taking any damage. Going further, the developers give the player even more control over what seems like a luck-based system with enemies that employ predictable patterns and equippable items that can "stack the deck" in the player's favor.

Without drowning this review in overly-specific details, I want to be clear in saying that this rock-paper-scissors mechanic is a skill-based implementation of something traditionally left to chance. It takes a little bit of time to appreciate the nuances of how it works (and the player will occasionally get spanked until that understanding comes) but once the system is fully revealed, it's a thing of elegant beauty. I'm not the kind of player that enjoys trusting in luck in my games, so it's a credit to Fate/Extra's developers that I admired this skillful design so much.

While I've got nothing but praise for the game, I do think it's important to point out that Fate/Extra is the sort of title that succeeds brilliantly on a portable, but would not stack up against things that people play at home on a TV. The graphics are attractive, but spartan. The various systems are streamlined, but feel too simple compared to larger RPGs. The predictable rhythms of gameplay are perfect for quick pick up/put down sessions, but would feel repetitive if played in marathon stretches. Having appropriate expectations here is key.

If viewed as an RPG with a tiny world and far too much text, I would imagine players walking away from Fate/Extra feeling unsatisfied or bored. However, when taken as what it really is—a visual novel with a superb level of gameplay—then it can only be appreciated as the fine effort that it is. Fate/Extra is exactly the sort of thing that makes me glad I own a PSP, and my advice to players who've been disappointed in recent releases would be to take their unit off of its shelf, dust it off, and fire it up for what's surely going to be one of the last quality releases before the Vita renders the hardware obsolete. Rating: 8.5 out of 10.


Disclosures: This game was obtained via publisher and reviewed on the PSP. Approximately 26 hours of play were devoted to the single-player mode, and the game was completed. There are no multiplayer modes.

Parents: According to the ESRB, this game contains drug reference, fantasy violence, language, and sexual themes. Although these warnings might give a parent pause, the actual content of the game is quite tame. With the exception of a few somewhat bloody special attacks and one psychotic clown, there is very little that most people that would find offensive. That said, level of writing is definitely aimed at older readers, so younger children will certainly be out of their element. It might not be harmful for younger ones, but it's far more appropriate for teenagers.

Deaf & Hard of Hearing: You won't have any problems. The voiceovers are Japanese-only, so hearing and non-hearing gamers alike will have to read the subtitles during each dialog scene. Since the game is turn-based, there are no auditory cues necessary for gameplay, and all relevant information is shown on-screen. It's totally accessible.

Just noting, Fate/Stay Night was originally a huge-ass Visual Novel, set in a huge-ass shared universe, together with Tsukihime (and its fandisk, plus+disc), Kagetsu Tohya, Kara no Kyoukai, Angel Notes., DDD, and so on. Fate/Extra, from the very beginning, was meant to be a treat for the die-hard TYPE-MOON fans. You can’t really appreciate it without at least reading Fate/Stay Night and Tsukihime, and I can’t really imagine how you’ve managed to like it without having read them. I mean, I wouldn’t be able to understand a shit of what’s happening if I hadn’t known about all the Grail War-NP-Reality… Read more »

I was quite surprised that you’d enjoy this game, Brad. I do want to say those worried about if you need to see the anime or movie or manga before you play the game, this is not the case. Speaking as a fan who enjoyed the anime version of Fate/Stay Night, while there are some elements like how gathering information was crucial and a few story points some people will find familiar, the game is an all new story with its own flavor set in an alternate timeline written by the same fellow who penned the first visual novel and… Read more »