The PNWJournos group went out to Haunted Temple Studios to get a hands-on with their upcoming XBLA/PC game, Skulls of the Shogun.

I'll have a full write-up on it pretty soon, so keep an eye peeled for that coverage. (The short version: it looks really great!) 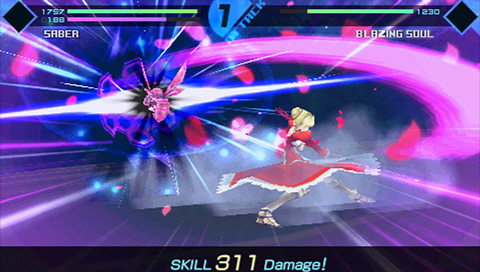 In other news, I recently started Fate/Extra for the PlayStation Portable. I know that it's based on an anime or some other related property, but I'm not familiar with the source material. In fact, my only other exposure to anything from the Fate series was the Fate/Unlimited Codes fighting game, also for PSP. (And really, that was pretty good!)

Given that I knew basically zero about this IP, I wasn't too sure what to expect, but I'm glad that I gave it a shot—I'm enjoying it a great deal.

Rather than another fighter, Fate/Extra is a hybrid game blending the RPG and Visual Novel genres. Essentially, a huge portion of the story is told through text that the player must read (gasp!) and the plot revolves around a war for control of a "Holy Grail." This struggle is being fought by several people referred to as Masters, and each Master has a Servant who's a famous figure from history. These Servants do all the actual fighting, but the twist is that their identities are hidden in order to maintain the element of surprise in each battle.

As the game progresses, uncovering clues about the other Servants becomes important because the game relies on a rock-paper-scissors combat engine. Without any information, the fighting is reduced to blind luck, and the player can count on nothing but a swift defeat. However, with enough information gathered, the opponent's moves are revealed and the player can choose their own moves to counter them. It's a very interesting mix of luck and skill, but there's quite a bit that goes into it in order to tilt the odds in favor of the player.

The writing is above-average, the setting is a great blend of Japanese high school, historical figures and the Matrix, the graphics are spartan but still very appealing, and although I don't think this formula would work at all on a home console, it feels like a perfect fit for a portable.

The game has predictable rhythms and very discrete "systems" that give the game a very pick-up-and-play feeling for quick sessions here and there without sacrificing its satisfying level of depth. It may seem a little dry and grind-heavy to some, but it's a very interesting project and one that strikes a lot of the right notes for me.

I wouldn't want to sit down and play it for marathon sessions, but for an hour here or two hours there, I'm down. 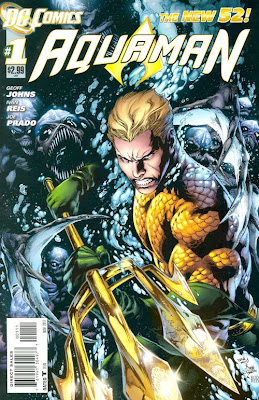 I had planned to do another full-scale comics run down tonight, but I ran out of time to read, so that will have to wait for another day. However, I did manage to finally get around to Aquaman #1 thanks to @Andrew_Reiner's recommendation, and he wasn't wrong.

I'm not an Aquaman fan, never have been, but I liked how this new #1 (part of DC's New 52 push) acknowledged this hero's semi-joke status and really addresses the fact that no one takes him seriously, not even the characters in his own world. Beyond that, what really sold me was the quick recap/relaunch of the hero that told me everything I needed to know without getting bogged down in old continuity. There were also a few moments showing a young Aquaman with his father that I found somewhat touching, so that was appreciated as well.

I haven't read the next issue yet and I'm sure that there's plenty of opportunity for the thing to go off the rails since, you know, Aquaman, but I'm definitely interested to see how the series progresses. I would never have guessed it, but this was a great start.