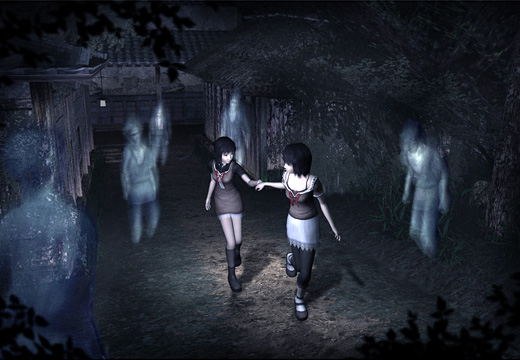 I agree with Mike in finding that Fatal Frame 2: Crimson Butterfly is one of the scariest, most unsettling game experiences around but only when I wasn't being bored out of my mind by the game's busywork and glacial pace. I do share our horror maven's sadness at seeing such a promising title go astray, but I'm not quite as forgiving as he is. For the first hour or so I was actively interested, but Fatal Frame 2: Crimson Butterfly quickly tranquilized me into a stupor no ghost could scare me out of.

With regard to the backtracking, I think Mike was really glossing over the state of affairs by merely calling it an abundance—it's the absolute core of "gameplay." In fact, you don't really do anything else throughout the experience aside from snapping pictures of the spirits that pester you intermittently. There are far too many keys and knickknacks to collect, all trivially meaningless. Quite often by the time I would get to an area where I needed to be, I couldn't even recall what it was I was sent there to fetch. That's how vital these little tasks are.

As for the rest, I'm going to have to strongly disagree with Mike about the story and how it's told. In games where the things you do aren't interesting or engaging, the experience can often be salvaged (at least partially) by a gripping narrative or memorable characters. This game has neither. The central idea of sacrifice to appease the underworld is a good one, but it's not all that different from what we saw in the original Fatal Frame. Even if you haven't played the original, the characters in Butterfly are quite dull, never expressing enough emotion to warrant investing in them. The plot's events also unfold too slowly, exacerbated by the near-constant search for keys and items. It never felt as though much of anything was happening.

Additionally, I have major, major issues with the techniques used to spin this yarn. The tried and true concept of "show it, don't tell it" has been tossed out a window, and the result is that the narrative is a joke. Not only is the worn-out "I found a diary, let's read what it says" gimmick in full effect, you also collect filmstrips to watch on a projector that you conveniently find, and even magic rocks that you play in a radio? Presenting so much to absorb in these past-tense, passive ways was a big mistake. I would have felt far more involved in these creepy ideas if I was actually playing through them instead of watching and listening, trying to remember who did what back when in the equivalent of a supernatural PowerPoint presentation.

To give credit where credit is due, the graphics are excellent (and even flat-out amazing in some places) and Mike's estimation of the audio is spot-on. Still, the sights and sounds can't carry a game where the interaction is so stale and insipid. In my opinion, it's high time the "scary genre" gets a swift kick in the ass—all of the bad habits and lame tricks have been done to death, and they don't cut the mustard anymore. Rating: 5.0 out of 10.