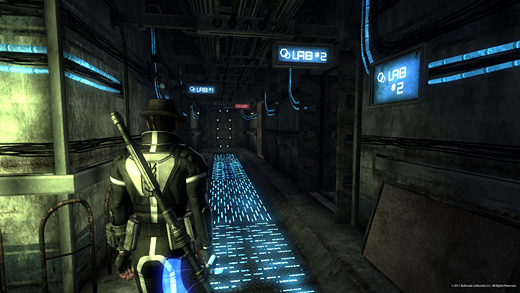 HIGH The toaster who wants to burn the world in nuclear fire.

takes the Courier and transports him/her to the Big Empty—an enormous crater walled off from the outside world and home to the last bastion of scientific knowledge left from before the apocalypse. Upon arrival, the Courier is subject to a few nasty surprises and must work together with a collective of disembodied brains to put things right for everyone involved.

In contrast to the other three downloads, Old World Blues isn't so much a structured mission as it is a large area to explore. There are certainly quests to undertake, but almost all of them are boring fetch-this affairs or other menial tasks that tried my patience. I found it hard to care about what I was doing, and if not for the quest log kept in my Pip-Boy, it would have been a challenge to even remember.

The banal nature of the quest design is a real shame because there are shining moments of brilliance to be found in the Big Empty. For example, there are several places that reveal secrets or call back to events in the main game or other DLCs. Learning the origins of the cyber-dogs and some of the strange mutations in the Vegas wasteland was great. Even better, the player can trace the cat-and-mouse footsteps of Father Elijah and Christine Royce in several instances of environmental storytelling.

Unfortunately, although these things are great to discover, they aren't well-integrated into any of the quests. They're also not juicy enough to justify what (to me, anyway) felt like numbingly flat content for the majority of my playtime. Blindly exploring the too-similar lab-type interior environments or going from one place to another in search of random doodads is basically the opposite of what makes New Vegas as enjoyable as it usually is, and I was surprised to find that this DLC was made up of such dull stuff.

That said, Old World Blues does have three things in its favor. The first is that there are some nice pieces of loot to be had; chief among them, a high-tech stealth suit with an embedded AI. The second thing is that the player will earn a brand-new hideout that can be accessed at any time from the main game. This new domicile is home to a number of robots which can perform helpful functions, and will likely be of great use to players who plan to spend more time in New Vegas. Finally, it has to be said that the dialogue and voicework done for the disembodied brains is absolutely hilarious.

It's rare that I would make a recommendation of this sort, but chatting with the available personalities is so humorous and so enjoyable that it nearly makes up for how uninspired spending time in the Big Empty is. Every one of the brains is completely insane and has their own foibles or hangups… when in the lab chatting them up, it's almost like being surrounded by a small army of GLaDOS clones, and I mean that in the best possible sense. Old World Blues offers a big chunk of this pleasantry at the beginning, and the bits at the end are quite good as well. If only the dishwater-dull gameplay wasn't so dreary…

is another case of a great idea not living up to its potential. If the interesting bits had been better integrated into the quests and missions had given me more reason to want to explore the Big Empty, this add-on would have been tremendous. Instead, I've got fond memories of some funny conversations but not much else to show for the time I put in. Rating: 6.5 out of 10.


Disclosures: This game was obtained via paid download and reviewed on the Xbox 360. Approximately 12 hours of play were devoted to the single-player mode, and the content was completed. There are no multiplayer modes.