Talk about Ending with a Bang… 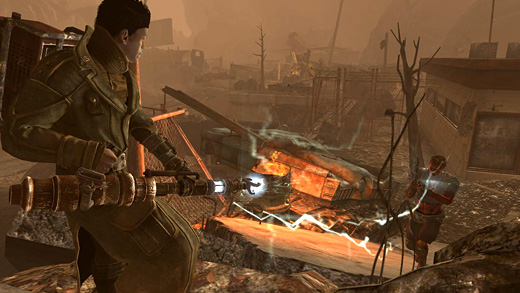 WTF The creatures in Courier's Mile can survive a direct nuke hit?

is the fourth and final add-on to Fallout: New Vegas. The mission begins with the Courier traveling to the Divide; a blasted landscape littered with dormant nuclear warheads and some of the toughest enemies in the game. The goal is to track down and meet up with another Courier named Ulysses, an enigmatic man who's been hinted at in all three of the previous expansions. It's a mystery whether this encounter will be friendly or hostile, but the meeting will impact the surviving world.

When I play expansions such as the ones offered for New Vegas, the thing I want most is something that wasn't available in the main game. Rather than "more of the same," I like to see chances taken and formulas changed up. I like to see new ideas and fresh challenges. Despite a few rough edges, Dead Money delivered that in spades. Honest Hearts and Old World Blues retreated from that boldness and suffered for it, but I'm happy to say that Lonesome Road gets back to the idea of offering something different. In fact, it takes the idea and runs with it all the way to a fantastic, action-packed finish line.

In contrast to the majority of New Vegas, the areas in Lonesome Road are quite focused and linear. There are still opportunities to explore, but they're drastically reduced compared to the wide-open spaces everywhere else. However, I see this as a good thing. In an effort to provide a showstopping conclusion to New Vegas, Obsidian decided to take the free-roaming reins away from the player so that the experience could be more intentionally focused and guided. Although I wouldn't want to see this approach applied in large doses, it's a perfect fit here.

By prescribing the path that the player will take from the beginning of the Divide to the end, the developers were freed up to craft the kind of large-scale architecture and devastated wreckage that really hasn't been seen in the game before. Climbing up piles of rubble into tilted skyscrapers and walking along the top of elevated freeways that could collapse at any moment was quite dramatic and delivered a more acute sense of loss and ruin than was found in the re-built, re-populated expanses of New Vegas proper. The environmental visuals were nothing less than stunning.

Another way that Lonesome Road differs from the main game is that the enemies are significantly tougher and come in greater numbers, so emphasis on combat is quite heavy. There are also a few scripted encounters and setpieces, and players who aren't at the top of their game should be wary of being chewed up and spit out long before reaching the end—in fact, if it's too tough, players can leave and come back. It can be a shock to get killed by one swipe from a Deathclaw or to be taken down by a small mob of half-ghoul Marked Men, but with death coming more swiftly, tension is ratcheted up appreciably.

Looking at the extras that can be taken into the main game after completion, there are some nice weapons to be had (the Fist of the North Rawr is fantastic) but the biggest rewards are upgrades that can be added to the player's loyal eyebot, ED-E. These upgrades include repairing any weapon once per day, generating ammunition for energy weapons, enhanced perception, and a few other perks. It's highly useful stuff that will serve any player well after leaving the Divide, and it basically guarantees that Rex the cyberdog will be perma-sidelined back at the Lucky 38. Sorry, Rex.

to a close, I had nothing but admiration for the mysterious, exciting, brutal and beautiful trek I took through the ravaged remnants of the Divide. I greatly appreciated the change of pace and shift in tone away from the core content, and the events which transpired were a great way to cap off a massive, top-tier RPG like New Vegas. Boom, baby. Rating: 8.5 out of 10.


Disclosures: This game was obtained via paid download and reviewed on the Xbox 360. Approximately 8 hours of play were devoted to the single-player mode, and the content was completed. There are no multiplayer modes.