Away from Home on the Range 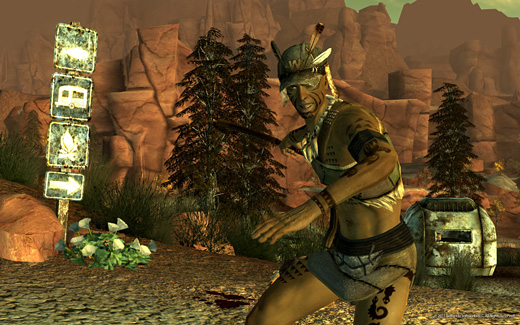 LOW Joshua's reaction when I told him Caesar was dead.

WTF Getting high and hunting bears.

takes the Courier from the wasteland of Nevada and transports him (or her) to the Zion National Park wilderness in Utah. The premise of the mission is to accompany a trade caravan on its route and keep it safe, but the group is ambushed en route and things take a turn for the disastrous. Soon after, the Courier discovers a struggle between local Native American tribes and must intervene in the conflict.

Coming immediately after the fantastic Dead Money, I was doubtful that the developers would be able to top that delicious bit of macabre intricacy, and I was right. While it's not a terrible expansion in any way, Honest Hearts suffers from several shortcomings that doom it to mundanity. It's not nearly as good as it should have been.

The biggest issue is the writing. Both the main campaign of New Vegas and Dead Money had top-notch dialogue, plotting, and characterization. Surprisingly, that's not the case here. While I did get a kick out of the first follower I encountered, Follows-Chalk, the rest of the personalities in the canyons and hillsides of Zion feel under-written and flat.

For example, potential teammate Walking Cloud hardly expresses any emotion or distress when a terrible secret is revealed to her. Rather than the interesting, deep companions that came before her, she feels like a quick rough draft of who she should actually be. The same is true to an even greater degree of the Burned Man, Joshua Graham. After being hinted at in the main game, I expected a little more depth from someone who was Caesar's second-in-command before being torched alive and tossed off the side of a cliff. He's got little to say in general, and after being told that I took Caesar's life, he barely batted an eye.

I was also disappointed in the general scenario of Honest Hearts. I liked the change of scenery and a Wild West-ish sort of adventure was something that held much appeal for me, but it never came together in any coherent way. If anything, it felt too rushed.

To my dismay, the starting caravan and its people are dealt with far too soon. Similarly, I didn't have time to feel any connection to the peaceful Dead Horses and Sorrows tribes, nor did I feel much anger towards the attacking White Legs. In a classic case of telling instead of showing, characters often explained what the situation was, but I never saw it firsthand—I kept waiting for some big event to hook me and make me care, but it never appeared. Even more surprisingly, there's never an opportunity to talk to the White Legs and hear their side of things. Apparently, they're just bad straight-up bad guys. Compared to the rest of what I've seen in Fallout: New Vegas, events here felt uncharacteristically black-and-white.

There are a few other things about Honest Hearts that could have used some work besides what I've already mentioned—too many names of people and places get dropped in the player's lap at the beginning, and it gives an overly-busy, muddled feeling to the plot before things get rolling. I also had a faint warning bell go off in my head when I discovered that both of the friendly native tribes were being led by white men. I'm guessing that the developers were reaching towards some social commentary, but it just came off badly. Besides all that, the missions are mostly fetchquests. Finding five lunch boxes, two walkie-talkies and a compass might pass muster in another, lesser RPG, but it doesn't match the care and thoughtfulness given to the rest of New Vegas.

After bringing peace (or something approximating it, anyway) to the Zion wilderness, I walked away from Fallout: New Vegas—Honest Hearts

feeling like it was a missed opportunity. With more time and attention given to the writing, characters, and quests, it could have been a very special experience. As it stands, it's a forgettable detour through Averagetown that strays from the exceptional content I've come to expect from New Vegas. Rating: 5.0 out of 10.


Disclosures: This game was obtained via paid download and reviewed on the Xbox 360. Approximately 4.5 hours of play were devoted to the single-player mode, and the game was completed. There are no multiplayer modes.

Did you find the computer diary entries of the Survivalist at the end of several cave systems throughout Zion? They were exceptionally well-written and

Spoiler
stumbling upon his corpse on top of a hill
was the highlight of all of New Vegas for me.

The Burned Man did disappoint after such a build-up.