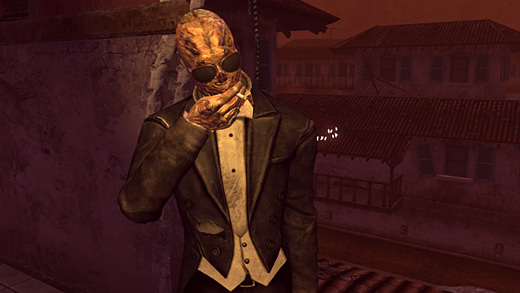 HIGH Realizing who Christine was.

WTF Why was the story's climactic encounter so confusing?

Prior to the download of Fallout: New Vegas—Dead Money

, the first expansion episode for Fallout: New Vegas, I felt as though it had something to prove—after having such a great experience with the main game, I didn't want to end on a sour note and pay $10 for the disappointment. After completing it, I'm happy to say that not only was it an excellent addition to the core adventure, it was an outstanding example of what quality paid content should be.

Dead Money begins with the player's character investigating an abandoned bunker housing a radio. A voice over the airwaves mentions the Sierra Madre Casino, but before anything else is revealed, the screen fades to black. An unseen attacker knocks the player out, strips them of their equipment, and drops them off in a new area with a bomb strapped around their neck. After awakening, a character mentioned in New Vegas makes the player an offer that can't be refused: assist him with breaking into the Sierra Madre, or the collar will explode and take the player's head with it.

It's a great start that introduces a complete tonal shift immediately. Not only does the player feel weak and helpless by being deprived of all their hard-earned equipment, the threat of death is constantly hovering nearby. This situation is made worse by the fact that not only can the collar be detonated by the ringleader of the plot, it can also explode if the player strays too near radio signals scattered throughout the area. While I think the developers went a little (okay, maybe a lot) overboard with how many radio signals are around, it's not terrible. If nothing else, it serves to keep the player on edge at all times.

Further distancing Dead Money from the main campaign is a red-hued environment filled with clouds of toxic gas, strange new enemies that don't die unless the player performs a fatality on them, a high number of crippling traps underfoot and overhead, very limited access to healing items, and the inability to rest in beds. It's rough going, and these factors combine to create an environment that takes New Vegas from open-world exploration and shoves it hard towards survival horror.

After being totally engaged by the new things to contend with beginning and figuring out just how new it all was, it was slightly disappointing to find that the first area of the quest is so visually bland. This "villa" outside the Sierra Madre is made up of dozens of look-alike buildings and streets. It's fairly easy to navigate, but it's quite boring and not convincing in the least. However, The Sierra Madre itself made up for it, and I soon forgot about the architecture anyway thanks to the fantastic assortment of Companions found tucked away in its far corners.

Dean Domino was a lounge singer in his previous life. Now he's a radioactive ghoul with a few secrets tucked into his pockets. Dog and God are split personalities of a powerful super mutant, one loyal to the person enslaving the player, the other battling for control of their selves. Christine Royce is a scribe from the Brotherhood of Steel, rendered mute for reasons unknown and only able to communicate through signs and gestures. The writing for each of these characters is top-notch, and any frustration from the difficulty of Dead Money's head-popping is worth enduring if for no other reason than to spend time with these people. I guarantee they won't be forgotten anytime soon.

Once the inner doors of the Sierra Madre are breached, the pace picks up and there are hard choices to be made at every turn. The person behind the plot has his own idea about who gets to walk away with the spoils inside the vault, and each member of the player's team has their own drives and motivations. Balancing all of these dynamics is a challenge, and will reward the player who enjoys unraveling complicated situations. That's not to say that my appreciation of the companions meant the mystery of the vault wasn't equally enjoyable, though. On the contrary, piecing together what happened to the casino's original inhabitants is quite intriguing, and the environmental storytelling is rich. In fact, it's almost as though there are two other characters to get to know, revealed only through the notes and relics they left behind.

Although it's certainly more difficult than anything to be found in the core content of Fallout: New Vegas, Dead Money

is exactly the sort of add-on content that I'm happy to see produced, and just as happy to pay for. The adventure is of a satisfying size, the writing and characterizations are strong, and it offers an experience that is uniquely different from the main campaign. As a matter of fact, it even includes some surprising revelations that will entice players to play through the other three DLC episodes that follow. From every angle, Dead Money is a winning hand. Rating: 9.0 out of 10.


Disclosures: This game was obtained via paid download and reviewed on the Xbox 360. Approximately 6.5 hours of play were devoted to the single-player mode, and the content was completed. There are no multiplayer modes.

Deaf and Hard of Hearing: The bomb collar emits a beeping sound when too close to deadly radio signals. This information is relayed on-screen, but sometimes the text that appears is delayed. Because of this delay, players with hearing impairments may find that there may be an added level of difficulty when trying to avoid deadly zones.

I disagree with your assessment of this DLC. The gameplay in the villa section is the majority of the game play for this DLC, but the least enjoyable. It destroys all of the reasons I liked FO:NV. The loot economy is terrible since most things can’t be easily sold and the prices are exorbitant. Instead of encouraging a particular combat style through enemy weakness, the player is economically limited to the use of the Melee and Survival skills. Also, your choice of spoilers is confusing. You reveal that Christine is from the Brotherhood of Steel (ties into a larger plot,… Read more »

Agreed. I played this one with hardcore mode enabled, and it was extremely tense – I reached the casino with 3 broken limbs and no health items left.

Also had my best fights of all the game, the new enemies (fast, agile and with a high PER) really add to the experience.