Think it can't get more oppressively dismal than D.C.? Welcome to Pittsburgh. 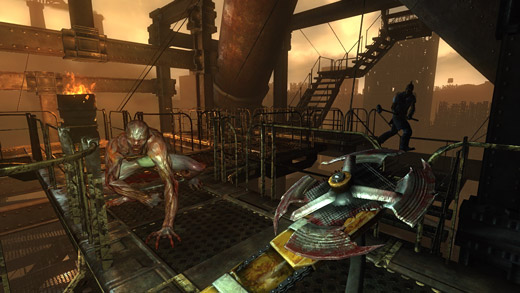 HIGH Going to a completely different area of the destroyed nation.

LOW The 100 item collect-a-thon quest is a tedious drag.

WTF It's not clear where your stolen stuff can be retrieved at quest's end.

Released for download on March 25th via Microsoft's Live service and abruptly pulled due to technical issues, the second of three currently-planned expansions for the superb post-apocalyptic role-playing game (RPG) Fallout 3 is now patched and available.

Titled The Pitt, the plot of this new content is that the character of the game receives a radio transmission leading him to a new area in the D.C. wasteland. Upon arrival, he is greeted by an escapee from what used to be Pittsburgh, and is quickly recruited to help free the slaves held captive there.

In an interesting and appreciated twist, players who might have grown to feel unstoppable thanks to the weapons and gear scavenged over the course of the main game will be reminded of their earlier, far more vulnerable first days outside the Vault. All weapons and items are confiscated in order to blend in with the other slaves, and things can be tense until more healing stimpaks and dropped firearms can be found. It's a great idea, and gives the perfect excuse to become familiar with The Pitt's most notable piece of new tech: the whirling, limb-lopping Auto-Axe. It's amusing.

While some players felt that Fallout 3's first download (Operation Anchorage) wasn't at all what they expected thanks to it being set in an odd "virtual" world, The Pitt is clearly in line with the majority of the core experience. There are several NPCs to talk with, players are free to explore the ruined, rusted-out environments at will, and there are choices to be made in the storyline. Everything that everyone loves about Fallout is present. However, though I'm always glad for the chance to get back into a game that I enjoyed so thoroughly, this download left me wanting more.

Honestly, I didn't feel as though the depth of choice so prevalent in many of the other quests was as fleshed-out as it could have been; up until the end, I kept waiting for more dialogue options and path branches that never appeared. Even worse, the adventure will likely be over in about two hours unless players decide to partake of the absolutely tedious fetch quest sending them off in search of 100 items scattered throughout a dark and confusingly laid-out segment of Pittsburgh. It's a terribly unimaginative and tedious way to add playtime, and I consider it quite beneath the standard of what I would expect in Fallout. Collecting Nuka-Cola Quantum was annoying, but it could be done in increments while knocking out more interesting quests. This new fetch is just a slog.

Although I realize that add-ons will naturally be on a smaller scale, I can't help but feel that Bethesda hasn't quite hit the sweet spot with the scope of these 800-point ($10) expansions. The Pitt doesn't offer a lot of impressive loot to score, collecting items for that last achievement is more trouble than it's worth, and the struggle-with-a-twist to free Pittsburgh's slaves (or not) is over before you know it. As a total Fallout junkie who will likely go in for every piece of DLC Bethesda can toss my way, I'm not saying The Pitt should be skipped… just come to it with a scaled-back level of expectation. Rating: 6.5 of out 10.

Reviewer's note: This new content is accessed the same way any other standard quest is, and can be selected via the appropriate menu on the Pip-Boy. It may take a minute or two to show up, but be patient and the message announcing the new quest will pop up soon after booting up the game.

Disclosures: This game was obtained via paid download and reviewed on the Xbox 360. Approximately 2 hours of play were devoted to the content, and the add-on was completed one time.

Deaf & Hard of Hearing: You will find that although there is sufficient visual information to play the game successfully, being unable to hear incoming gunshots, monster growls and voice samples of enemies outside of the field of vision will make the experience somewhat tougher. Keep those eyes open. On the plus side, subtitles are available for all dialogue.

Here are a couple of collosal get-outs in that review. I realise a lot of the technical issues have been sorted, but that save game comment at the start is being hugely generous. Whether it is “a Bethesda game” or not, I am left with the impression that some gamers may find themselves unable to actually proceed. That is surely a massive problem for those it affects (fortunately, it sounds like it won’t affect too many players). In any event, my honest feeling is that it is proabbly best to avoid FO3 DLC for a while until everyone else has… Read more »

SPOILERS While I appreciated the ambiguity of the pivotal choice, everything that came after it seemed confused and poorly conceived. I play the Vault Dweller as VERY evil cannibal who is resentful of his father, so I liked having an opportunity to destroy a family unit. (Yes, I took the baby.) Unfortunately from there plot fizzles out; I was expecting a big showdown with Ashur but no, I went outside and he was casually milling about with a couple raiders and I killed him with a single swing of the Man Opener. Blah. After some running around I somehow wound… Read more »

Hey Toddard, Thanks for your comments, and I absolutely agree about what you said. In fact, what you describe was basically the biggest determining factor for me scoring it as low as I did. SPOILERS BELOW That same juncture really ruined the entire DLC for me… when I discovered that “the cure” was what it was, I decided to not steal it but instead look for a third way. I fully intended to free the slaves without taking “the cure”, yet as you have already mentioned, there were no more options. I was confused as hell when I left the… Read more »

Good review. My expectations of this DLC were already tempered by the experience I had with Operation: Anchorage. I also agree on the steel ingot hunt, to a point. I grabbed just enough to continue the main story line, and left the rest. I will probably go back for the remainder, however, since I am a bit of a completionist, particularly in this game. I had one BIG gripe with the game, detailed below. SPOILER ALERT — SPOILER ALERT One thing that really rubbed me the wrong way was how the game determined which ‘side’ I was on at the… Read more »