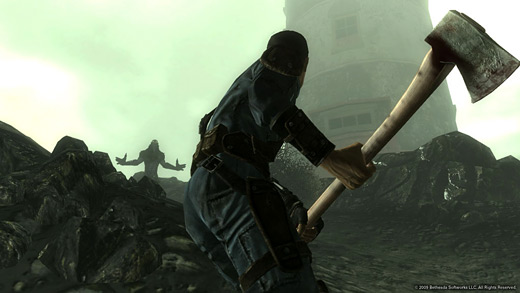 HIGH Vast and rich, it feels like a perfect extension of the main game.

LOW The ending loot is a disappointment.

WTF Why are these 'shine-swilling hillbillies so bullet-resistant?

Released online June 23, 2009 for PC and the Xbox 360, the fourth of five currently-planned expansions to the superbly-irradiated RPG Fallout 3 is now available.

(To eliminate any confusion, it should be noted that there were only three expansions initially announced. After meeting with success, Bethesda added two more; Point Lookout and the upcoming Mothership Zeta. These will allegedly be the final add-ons to Fallout 3.)

Set in an all-new location much larger than any of the previously-released additions, Point Lookout takes the player to a moody, murky area of Maryland sporting a rocky coastline on one side and a wooded marsh inland.

Stepping slightly away from the blasted landscape of D.C., this environment takes on a different flavor—although it's clear that the area has suffered greatly, it wasn't quite as hard-hit. The survivors remaining have mutated into a different sort of existence, and life, although still bleak, isn't quite the minute-to-minute struggle it is elsewhere. Taking advantage of these circumstances, Bethesda has branched out in a slightly different, horror-tinged direction.

Without spoiling anything, I can say that there are between ten and twelve quests (depending how they're counted) and in general, their quality is much higher than what players have previously received in the last three add-ons. Although some are certainly simpler or more straightforward than others, there is a relatively generous amount of discussion and decision-making to be had, in addition to a bit of detective-style leg work. In my view, these are the things that make the Fallout experience what it is, and the primary elements that were lacking in the first three expansions.

Another form of choice that's equally enjoyable, Point Lookout is presented as a continuous landscape to be explored at will. After being dropped off at the docks, the player is free to ignore the suggested activities and wander off in any direction. There are a slightly shocking number of named locations to discover, and the developers at Bethesda have once again succeeded in composing passive situations dripping with suggestion. Although easily overlooked, players who take the time will be able to piece together a rich tapestry of implied backstory and flavor whether they poke around the abandoned motel, the lonely lighthouse offshore, or one of the deteriorating mansions littering the landscape.

Overall, this is the largest and most fully-realized expansion yet produced for Fallout 3, and it's an order of magnitude better than any of the previous installments. With quality on par with what can be found in the main game and a significant amount of content for players to digest, if a person could only choose one Fallout add-on, it would most certainly have to be Point Lookout.  Rating: 9.0 out of 10.

Reviewer's note: This new DLC is loaded into the game upon start-up, and the player can to access the new mission and other content like any other quest in the Info menu screens. If it's not immediately seen, wait for a few minutes and an onscreen notification of its availability should appear within a minute or two.

Disclosures: This DLC was obtained via paid download and reviewed on the Xbox 360. Approximately 8 hours of play were devoted to the single-player mode, and the DLC was completed one time. There are no multiplayer modes.

Deaf & Hard of Hearing Gamers: You will find that although there is sufficient visual information to play the game successfully, being unable to hear incoming gunshots, monster growls and voice samples of enemies outside of the field of vision will make the experience somewhat tougher. Keep those eyes open. On the plus side, subtitles are available for all dialogue. (Exit the menu screens to see subtitles for audio logs.)

Great review. I have played through Point Lookout and had the same impressions: finally some Fallout 3 DLC that feels like Fallout 3! There’s not much I can add to your review, except there are at least two mysteries aside from the main quest I have not yet solved. I’m not sure they can be solved — or if they are simply part of the back story, but it will be fun to try to do so. So, I’ll be heading back to the Point even though I’m done with the main quest. I’ll also be loading up a previously… Read more »