Bringing the fight to a much colder, less radioactive wasteland 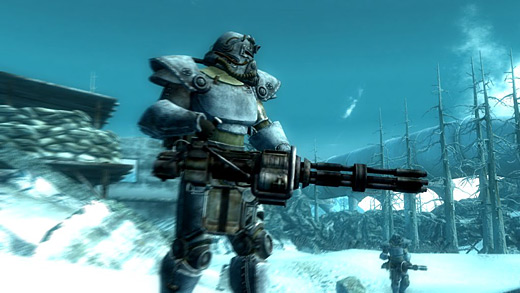 HIGH It's more Fallout, for players like me who couldn't get enough.

LOW Getting warped out of an area before I was done searching.

WTF The battle near the end could have been a bit more epic.

Released for download on January 27th via Microsoft's Live service, the first of three planned expansions for the superb post-apocalyptic RPG Fallout 3 is now available.

Titled "Operation Anchorage," the plot is that the main character of the game receives a radio transmission leading him to a new area in the wasteland. Once there, a band of Brotherhood Outcasts report that they've located a large cache of technology and weapons, but it can only be unlocked after someone successfully completes a holographic simulation program re-creating a pivotal battle in Fallout's history. After entering the sim, the player is transported to a military base in Alaska, and must lead the virtual troops to victory by pushing back the invading Communist Chinese.

Since the simulation takes place in the past before nuclear bombs decimated America, there are no irradiated mutants or abandoned ghost towns. In fact, the tone and setting are a radical departure from what the main game offers. Painted in chilly blues and whites, players will make their way through rocky cliffsides and wind-whipped snowfields, fighting off standard infantry troops and deadly elite snipers with Predator-like stealth camouflage.

The game design has received as much of a shift as the environment and enemies have. Instead of the wide-open, go-anywhere, scavenge-anything formula, the type of play here feels much more like a standard military-themed shooter; a sort of Fallout-meets-Call of Duty, so to speak. Instead of taking time to loot every shelf and cupboard, the bulk of the content's 3-to-4 hour duration is spent eliminating the opposition and securing outposts. Reinforcing this new style, health and ammunition in Operation Anchorage are dispensed at preset intervals. Players must be a little more cautious in combat and think on their feet, since there are no stocks of Stimpaks or other remedy items available. Rushing forward and relying on carried inventory for survival is not a valid option here.

Technically speaking, I found that Operation Anchorage was noticeably buggy. I encountered a few freezes requiring reloads, the game did not run as quickly or as smoothly as it did before adding the content, and there are other quirky things that can happen, such as unexpectedly leaping a hundred feet into the air—exciting going up, not so much coming down. Although none of these rough edges are game-breakers by any means, it was a bit disappointing to find that the technical side wasn't as polished as it could have been.

Although players expecting a new cast of characters to interact with and another vast stretch of territory to explore may be disappointed, I found this focused revamp to be a welcome change of pace and a very interesting addition to a game already brimming with quality content. Add in the fact that there's some pretty decent equipment (Gauss Rifle, anyone?) and four more Achievements to be earned by the end of the mission, and I think it's safe to say that any Fallout 3 fan will find the 800-point investment ($10) to be worth it. Rating: 7.5 out of 10

Reviewer's note: This new content is accessed the same way any other standard quest is, and can be selected via the appropriate menu on the Pip-Boy. It may take a minute or two to show up, but be patient and the message announcing the new quest will pop up soon after booting up the game.

Disclosures: This game was obtained via paid download and reviewed on the Xbox 360. Approximately 3.5 hours of play were devoted to the content, and the add-on was completed 1 time.

Deaf & Hard of Hearing Gamers: You will find that although there is sufficient visual information to play the game successfully, being unable to hear incoming gunshots and voice samples of enemies outside of the field of vision will make the experience somewhat tougher. Keep those eyes open. On the plus side, subtitles are available for all dialogue.

With “Operation Anchorage”, “Fallout 3” has somewhat unexpectedly thrown off the confining shackles of pretence and bravely (if somewhat foolishly) exposed the true fabric of the Emperor’s new clothes. I guess this is Bethesda’s peculiar way of admitting that the critics were right all along in pointing out that the “Fallout 3” developers weren’t really interested in creating anything more than yet another mediocre pseudo-shooter with only the thinnest varnish of role-playing mechanics. A belated admission for which they really shouldn’t have charged extra; especially considering how brimming with uninspired filler content the original game already is… (…and no, I’m… Read more »