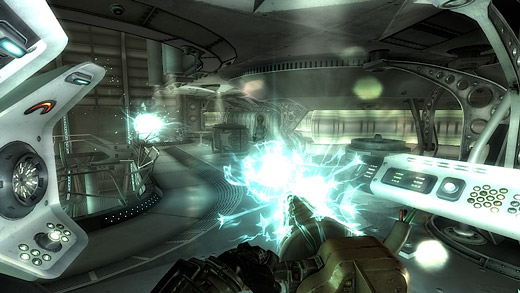 HIGH Thawing out the anachronous survivors.

WTF The amount of wasted potential on display here.

Released online August 4th, 2009 for PC and the Xbox 360, the last of five expansions to the superbly irradiated RPG Fallout 3 is now available.

Before saying anything else, I want to express my great love for Fallout 3 as a whole. It's an immense, monumental game that captured my attention in a way that very few other titles have. In fact, I can't remember another title in (at least) the last ten years that sucked away so much of my free time and had me absolutely content to let it. Since it's the fifth and last expansion to Fallout 3's main game, completing Mothership Zeta means that my days spent wandering the wasteland are now at a close. Honestly, I feel a little sad to see this experience finally reach an end. What a long, strange trip it's been…

Wistful feelings aside, I'm not here to reminisce about my admiration for Bethesda's opus, I'm here to review Mothership Zeta itself—and I'm not happy about it. In a nutshell, I'm sad to report that this sprawling, immense adventure has ended on the sourest note possible.

The premise of Zeta is that the main character receives a mysterious radio transmission and goes to investigate the source. Upon arrival, he (or she) is immediately beamed up by a vast alien spacecraft overhead. Although they've placed him inside a cell to await vivisection, the extraterrestrial captors prove vulnerable to a few punches to the face. Making his getaway, the player's character escapes into the depths of the ship with the goal of returning to Earth.

Although this scenario seems ripe with potential, the fact of the matter is that it boils down to another one-note blast-fest similar in tone and structure to the first piece of DLC, Operation Anchorage. Players will spend the majority of their time walking through hallways and large lab areas taking down hostile aliens who soak up huge amounts of damage thanks to their personal energy fields. There is very little dialogue and practically no exploration, unless checking item boxes and tabletops along the way to the next objective counts.

While Anchorage could be forgiven as the first attempt at defining DLC, it was far from perfect. Even so, I was more than willing to give it a little slack just to see where Bethesda was going. This time around, there's no excuse for Zeta to be such a straightforward, tediously repetitive add-on. The feedback from players on Anchorage's missteps was very clear, so I'm baffled as to why this final piece of content feels like a clone of the first, experimental one.

Far too much time is spent eliminating enemies in the cut-and-pasted environments, and as most Fallout players will agree, killing things is the least satisfying part of the game. The true value of the wasteland lies in the interesting situations players stumble into; the moral dilemmas and hard choices. Exploration and the desire to find out what lies around the next corner are another big reason why people spend so much time among the raiders and radscorpions—just wandering from place to place was endlessly rewarding. Unlike the superb Point Lookout which immediately preceded it, Zeta offers exactly none of these things, and ends up being the least enjoyable, least complex, and least interesting expansion Bethesda's offered.

If Mothership Zeta had been half as long and available at half the price, it might have been worthwhile simply for giving players a quick peek behind the origins of the main game's enigmatic alien wreckage. As it stands, this dog-leg jaunt into outer space ends up a giant could-have-been without any real reason to recommend it, save completion for completion's sake. Rating: 3.5 out of 10.

Reviewer's note: This new content is loaded into the game upon start-up, and a message will display onscreen informing the player that the new quest is available within a few minutes of starting play. Simply select it from the pip-boy menu as if it were any normal quest.

Disclosures: This game was obtained via paid download and reviewed on the Xbox 360. Approximately five hours of play were devoted to the content, and the add-on was completed one time.

Deaf & Hard of Hearing: You will find that although there is sufficient visual information to play the game successfully, being unable to hear incoming laserbeams, monster growls and voice samples of enemies outside of the field of vision will make the experience somewhat tougher. Keep those eyes open.

Does anybody know if Fallout 3 (for PS3 particularly) provides the option to invert the camera for both the X and Y axis? Thanks in advance. 🙂

uhg mew balls for a edit button…. sorry…zippy is a thought perpetually unfinished >>

FO3 even Bioshock IMO is a lot of missed potential I see a lot of rushed design elements and not a lot of follow through to finish/polish the games but I can say that easily for 90% of modern games now adays.

I don’t mean to be mean but my god its one of the most unfinished games I have seen sale so frakking well…..

Good to see another honest review of a part of the Fallout 3 universe, a game which I too adore but would be among the first to admit is flawed. I had high hopes when I heard the synopsis for Mothership Zeta and it is a shame Bethesda haven’t done a better job on it. I read a rival website with a high score praising the add-on for “even using a real Japanese speaker to voice the samurai”. Like, wow… Is it not worrying that so many write-ups focus on the special effects in games and not the actual play… Read more »