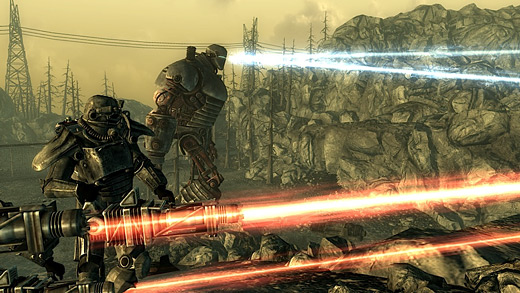 LOW Not enough new gear, though the Tesla Cannon is pretty fab.

WTF Was there no way to save and carry over experience from the last two add-ons?

Released online May 5th, 2009 for PC and the Xbox 360, the last of three currently-planned expansions to the superbly irradiated RPG Fallout 3 is now available.

Titled Broken Steel, this new addition is actually far more significant than the previous two. In addition to a new mission and some new gear for players to discover, it completely alters the end of the game's central quest. Now, rather than bringing the adventure to a close with the fulfillment of Project Purity, Broken Steel permits players to keep on adventuring in the wasteland—something demanded by practically everyone who played it.

From a personal perspective, this was probably the single most important fix Bethesda could have implemented to improve the core Fallout experience. Not only was the original ending completely ludicrous and nonsensical from a plot perspective, it made absolutely no sense in regard to the gameplay. After all, why create one of the most expansive, immersive, and convincing virtual locales only to kick players out for completing the main quest? After spending nearly seventy hours in post-apocalyptic DC myself, I still haven't seen everything there is to see. So, considering that a person following the critical path from start to finish could see credits in fifteen hours or so, allowing them to continue the adventure was an extremely wise decision. I'm very glad they reconsidered, and this change could also be seen as one of the most effective and appropriate arguments for producing add-on content to retail games.

(In addition, the highest experience level players can achieve has now been raised from 20 to 30. This is a good thing, since the majority of diligent players reported hitting the original level cap halfway through the game, or even earlier. Need even more reason to keep on exploring? There it is.)

Turning to the rest of Broken Steel, the new quest involves hunting down the remnants of the Enclave and introduces another new area, Adams Air Force base. This particular string of missions starts slow, but the base itself is a great new environment, and the Tesla Cannon awarded to the player along the way is a tool of major destruction. Overall the quest was enjoyable enough and did pack a few "wow" moments, but like the other two DLCs, it's more combat-oriented and falls short in the role-playing and decision-making areas. Although I'm always glad for more Fallout, the real motivator to download Broken Steel is the endgame fix.

As far as criticism goes, the only issues I see are small ones. For example, it was disappointing to confirm that the game had not been keeping track of the experience points I had theoretically "earned" after hitting the level cap and playing through the last two add-ons. Besides that quibble, there don't seem to be many locations in the wasteland where people recognize that the events at the endgame have changed. I can only imagine the magnitude of work re-jiggering that much dialogue would have involved so I'm not really holding it against Bethesda, but I have to admit that it felt a bit hollow. That said, those are extremely minor concerns—Broken Steel is an absolute necessity for any Fallout 3 player and certainly justifies the cost of the download. Rating: 8.0 out of 10.

Reviewer's note: This new end-altering fix is loaded into the game upon startup, and the player must complete the main questline before being able to access the new mission and other content. If the game has already been completed, either load up a previous save before completion or… start a new game.

Disclosures: This game was obtained via paid download and reviewed on the Xbox 360. Approximately four hours of play were devoted to the content, and the add-on was completed one time.

Deaf & Hard of Hearing Gamers will find that although there is sufficient visual information to play the game successfully, being unable to hear incoming gunshots, monster growls and voice samples of enemies outside of the field of vision will make the experience somewhat tougher. Keep those eyes open. On the plus side, subtitles are available for all dialogue EXCEPT the ending sequence. Terrible omission there, Bethesda.

None of the extensions to Fallout seem to be really worth a dime, for what I’ve read in all the reviews and comments.
I was ready to get this one for the levels, but instead I’ll get one for another game.
To bad, I liked the little freedom given to the players by this game.

You know, you’re absolutely right… It’s been so long since I watched the opening that I had completely forgotten. good call, DR.

About the lack of subtitles during the ending, there is also no subtitles in the opening sequence. Yet everything else is subtitled. WTF?