No Happily Ever After Here… 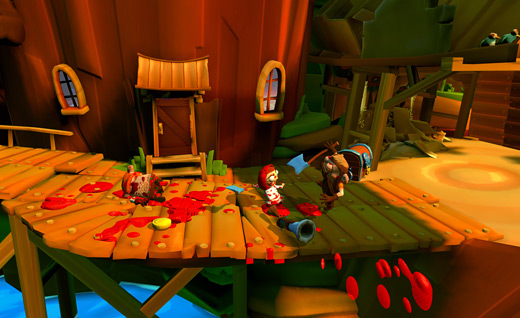 LOW There is absolutely no depth to the gameplay.

WTF The amount of ice needed for my right thumb after two hours.

After playing Fairytale Fights, I couldn't help but wonder how this game got made. At some point, someone had to have looked at it and said "Yeah, let's go with this. Green light." The fact that this happened simply does not compute.

I mean, don't get me wrong—the premise is golden. Take well-loved tales everyone knows and skew them in a hyper-violent way. Red Riding Hood wielding a cleaver sounds pretty exciting. Snow White taking shots with a blunderbuss? Even better. What's not to like about this concept? I was halfway sold just thinking about the possibilities, but having potential is one thing… Actually capitalizing on it is something else entirely. I'm sorry to say that Fairytale Fights didn't bother going any further once the main idea was penciled in.

In a nutshell, players take one of four fabled characters and essentially walk from left to right while killing everything that crosses their path. This is a time-tested formula that has proven successful many times in the past, but there's usually more to it than just that. In this particular case, sadly, that's all the player gets. No grappling, no spectacular super moves, no leveling up, no stats to increase, nothing to earn, nothing to learn, no way to customize or personalize characters… nothing. It's literally attack, attack, attack and move on. Once you've seen the first fifteen minutes, you've seen the game.

To be completely fair, there are a wide variety of weapons to be wielded. Axes, pliers, rolled-up newspapers, paddles, chandeliers, swords, mandolins, swordfish, hammers, chainsaws, slingshots, magic wands, and dozens of other things can be found and used, but there's not a lot of appreciable difference between types of weapons and not nearly enough variety in their use to make up for the extremely shallow combat. No matter what you have, it's all about the same.

Making matters worse, attacking is bizarrely mapped to the right stick and requires constant tapping to maintain the offensive. It might have made sense if the direction pressed actually corresponded to the direction that attacks go in, but there doesn't seem to be much rhyme or reason to it. Combos frequently travel away from enemies despite pressing the stick towards them, and it's very common to push down and have an attack go in any direction but. This unusual, unwieldy, unchangeable choice didn't add any value to the overall design, and it made my thumb pretty damned sore, to boot.

I will admit that I liked the art direction and the psychotically gleeful envisioning of Fairytale Fights's world, but games need a lot more than cute visuals and a neat idea to be a success. Is it really supposed to matter that the game includes volumetric liquid blood-spilling, or a robotic, blade-laden version of Pinocchio when the core experience is so painfully limited and boring? Put as much lipstick on as you want, but the straw-hut pig underneath is still a straw-hut pig.

With a nonexistent base of gameplay to build upon, every other aspect of the title (including that golden fairytale premise) is utterly wasted. I can think of no earthly reason why anyone should spend time with this game, especially with the overflowing cornucopia of high-quality titles all vying for attention this holiday season. Fairytale Fights would have been starkly disappointing as an XBLA or PSN download-only title, but as a retail game taking up shelf space, it's absolute failure. Rating: 2.0 out of 10.

Disclosures: This game was obtained via publisher and reviewed on the Xbox 360. Approximately 2 hours of play were devoted to the single-player mode, and the game was not completed. No time was spent in multiplayer modes.

Parents: According to the ESRB, this game contains blood and gore, crude humor, and violence. Don't be fooled by the cutesy cartoonish character models, there's actually a ton of blood and violence to be had in this title. All sorts of weapons chop, maim, and impale the enemies that players encounter. The level of graphic detail is not particularly lifelike, but you still wouldn't want little ones getting their hands on this.

Deaf & Hard of Hearing: You won't have any problems since there's no dialogue in the game except for tutorial messages popping up occasionally, and those are presented only through text. There are no significant auditory cues. I don't know why you'd want to play this, but if you do, you won't encounter any auditory barriers.

it got this for free with a contest i had to guess who was the character on a image and that was little riding hood and now im happy ! 😀

It’s been done for a while… starting to wonder that myself. ^_^

Should be soon, I’m guessing…

It’s games like Fairytale Fights that Xbox Live Arcade and PlayStation Network were created for.

Short, niche titles like this one are the sort of game that gains momentum in the online communities even when they aren’t very good.

Misjudging whether a game is better suited as a retail title or an digital distribution title can (and probably will) doom a game like this.

I have no intention of playing it,
but it makes one hell of a youtube video.

Ok, maybe I will play it, if I see it RRRRRREALLY cheap.