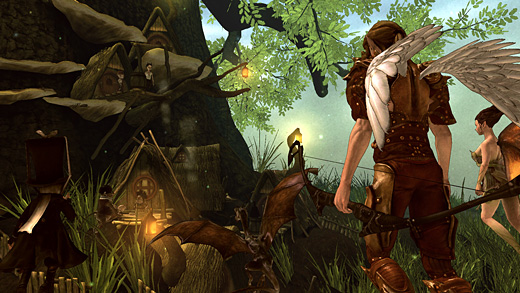 HIGH The amount of loving care poured into every aspect of the game.

LOW …every aspect except the laughably shoddy English translation.

WTF Is the deal with the "final battle"?

In an industry where "big games" are hyped so widely and so far in advance that they feel old and overfamiliar by the time they launch, one of my favorite things is discovering a quality title that I know absolutely nothing about. It happens only rarely, but when it does, it's the kind of surprise that gives me a warm, fuzzy feeling all over.

Faery: Legends of Avalon, is one of those out-of-nowhere efforts. I didn't know a thing about it until the demo appeared on the Xbox Live marketplace, but I enjoyed it so much that I felt something of an obligation to sing its praises. After all, it's one thing for a reviewer like me to be treated to an occasional surprise, but that waiting-to-be-discovered status doesn't do much for the developer …

In essence, Faery: Legends of Avalon is a very simple, straightforward RPG done in classic style. The structure and design of most elements will be quite familiar to anyone with even cursory experience in the genre, but this is one case when quality production and great artistry can help elevate a title that would be otherwise unremarkable.

The first things sure to catch anyone's eye are the surprisingly deep set of character customization options.  For a small download a title like this one, the option to choose between male and female in addition to having quite a bit of control over the facial features, skin tone and hair color is a great way to start. (It's also worth noting that there are multiple options for further customization as the game continues.)

Once the player's avatar is set and the adventure begins, a number of interesting things become apparent: Faery's art direction and environmental design are excellent, the game is designed to be an open-world adventure on a microscopic scale, and quite refreshingly, the player gets around by literally flying everywhere, practically without restriction.

The game offers four distinct environments, and while they are all rather small in size, I don't say that as a negative. After recently playing several games that featured huge areas to constantly traverse, it was a breath of fresh air to be able to zip through the air to my objective in a matter of seconds, rather than minutes. 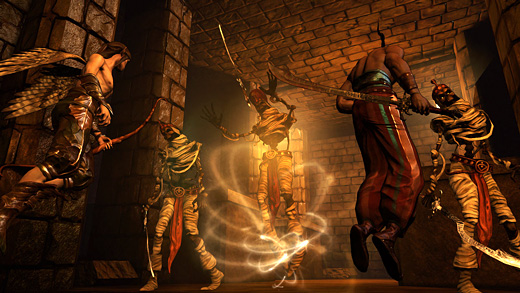 More than just a novelty, each area accentuates the importance of flight by featuring vertical elements and a very three-dimensional approach. The lonely, rocky island, the ghostly pirate ship, the sky-filling tree, and the city mounted atop an immense, desert-crossing beetle are all brimming with flavor and beg to be examined from all angles.

Character models are fairly detailed and attractive, with the developers taking their cues from older, more culturally-accurate versions of faeries and related mythology. Quite different from today's candy-colored retail Tinkerbells, beliefs historically characterized these diminutive spirits as much wilder; essentially amoral and chaotic in nature. There is an edge of darkness to everyone the player meets, and to say that some of the creatures encountered are somewhat frightening would be quite fair.

Quality visuals aside, it's true that the quests are of the "talk to X, do Y, talk to X again" variety, but a nice (and again, unexpected) feature is that there are usually two ways to solve some of the bigger challenges in the game. Faery isn't going to give Deus Ex a run for its money, but while I was prepared to battle my way through to the end, it was nice to frequently have a choice that met my goals without killing something.

Speaking of killing, Faery's simplified turn-based combat system won't satisfy players who crave strategic options running six menus deep, but I appreciated the elimination of magic points and the convenience of having my party restored to full health after each battle. Some may feel it's too easy, but the pace of play is swift and it's clear that being approachable takes precedence over challenge. In this regard, I felt this trade-off was successful.

Quite honestly, I found myself pleased with nearly every aspect of Faery except one: the English dialogue translation. Overall, the work turned in by the scripters is quite shoddy, and is in great need of polish. With all of the TLC given to every other aspect of the game, I find it hard to understand how the writing could have been approved with so many errors, odd word choices, and clumsy statements. With no voice acting to support character interaction, it falls to the text to do the heavy lifting. In this case, the text comes up short. It's not game-ruining, but it certainly is disappointing.

While some may make the case that Faery: Legends of Avalon is too simple, or that it doesn't bring much new to the table, I find that attitude hard to understand. For a very reasonably-priced and small-scale download, players get a well-rounded RPG featuring a fantastic art style and unconventional subject matter that's rarely (if ever) been covered. The adventure may not last for sixty hours or make players sweat with grinding difficulty, but when taken in the proper context, Faery is a noteworthy effort that I'd very much like to see more of. Rating: 8.0 out of 10.

Disclosures: This game was obtained via paid download and reviewed on the Xbox 360. Approximately 8 hours of play were devoted to the single-player mode, and the game was completed. There are no multiplayer modes.

Parents: According to the ESRB, this game contains alcohol reference, crude humor, fantasy violence and mild suggestive themes. Despite all the warnings given by the ratings board, it seems to me that the thing to be most concerned about in this game is that some of the imagery can be a little frightening. It's not terrible, and most kids old enough to be able to follow the text should be able to handle some of the visuals, but it's still something to be aware of. The violence in the game is extremely tame and not graphic in the least (the main character actually has discussions with most defeated characters afterwards) and in general I would say this is an extremely safe game for younger players.

Deaf & Hard of Hearing Gamers have nothing to worry about. There is no voice acting in the game, only text, and there are no auditory cues whatsoever to be concerned about. Gameplay is leisurely when exploring, and combat is strictly a turn-based fair. Everything here is totally accessible.