The Adventures of Noel & Barbara 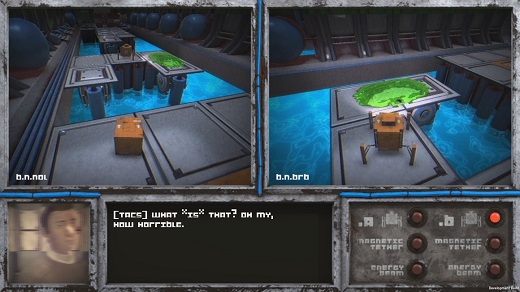 HIGH Those robots are so creepy-cute!

LOW The number of tries needed to figure out the movement of the clone.

WTF It's only available on Xbox One? Nooooo!

I don't often describe games as delightful, but after completing Factotum 90, that was the word that kept jumping into my head.

This small-scale science fiction puzzler starts with a great conceit—the player is a crewmember on disabled spaceship, and their only means of interacting with the world is by operating two service robots through the computer screen in front of them. Another crewmember makes contact via radio and explains that the ship is in great peril. The only hope is to get the robots from one end of the ship to the other so they can solve the dilemma and resume their journey.

Of course, getting the drones to their goal is the hard part. The player has two screens which show the robots' viewpoints, and switching between them is done at any time by pushing a button. The ship is divided into 30 discrete rooms, each of which is an environmental puzzle. All sorts of obstacles crop up along the way—moving platforms, force fields, hard light bridges, things that need to be exploded, holographic clones that need to be manipulated, and more.

Interestingly, no matter the challenge, the robots have a limited skill set to work with. They can only walk, pick up and move boxes, and redirect lasers. While this toolbox might sound too limited, I found it to be elegantly simple. In any given situation, the player knows there are a fixed number of options, and by working through them, this reduces the possibility that they'll get confused or hit a wall.

Looking at the puzzles, their quality was quite good. Some rooms were on the easy side (one robot holds a switch down to open the gate for the other, and so on) but the difficulty ramps up to a pleasant —but never frustrating—degree. With a little logical thought and thorough examination of the rooms, solutions become clear. At that point, they become an exercise in performing operations in the correct order. Does one robot need to grab the box before I send the other across the bridge, or vice versa?

Manipulating the two robots and keeping track of them as they explore the rooms gives a satisfying level of complexity, but the developer goes to great lengths to make sure the experience is positive, and never overwhelming. The rooms are perfectly bite-sized, and when a switch is pushed, an indicator pops up to show exactly what (and where) in the room something was activated. There are no time limits, and if something goes awry, the robots can respawn at the beginning without losing progress and without incurring penalty. Despite the story-based threat of death in deep space, Factotum 90 is a laid-back, satisfying puzzle run.

In terms of presentation, the graphics aren't going to blow anybody away, but I found they absolutely got the job done, especially considering that the developer is a one-man studio. However, I do want to give props for the design of the robots themselves.

The pair, named Noel and Barbara, are essentially brown crates which open up into spider-like drones. There's a slight edge of creepiness to them, especially when they're facing the player and their red eyes are visible. That said, they're blocky and cute, and when they come within close proximity to each other, they chatter back-and-forth in machine language. I fell in love with them, just a little bit, and there's something incredibly appealing about these simple creatures slowly working through every barrier with the power of teamwork.

Factotum 90's script and voicework are praiseworthy. Although the player's character never speaks (I believe their mic is ‘broken') the other crewman trapped on the ship constantly pops up with color commentary and tips for each level. It's a simple, straightforward tale, but it gave the game unexpected personality and kept me motivated to get the robots to the end. Of course the real reason to play is for the satisfaction of completing the puzzles, but the narrative displays a level of TLC that's a joy to see.

Although I'd never heard of it before it randomly popped up on the Xbox One store, Factotum 90 ended up being an absolutely wonderful puzzle experience, appreciated for the compactness of its design and for the elegance with which it was delivered. Also… Noel and Barbara are kind of impossible not to adore. Rating: 8.5 out of 10


Disclosures: This game was obtained via paid download and reviewed on the Xbox One. Approximately 6 hours of play were devoted to the single-player mode, and the game was completed. There are no multiplayer modes.

Parents: According to the ESRB, this game contains no descriptors. There's no violence, no sex and no salty language. It's 100% safe!

Deaf & Hard of Hearing: There are no audio cues necessary for play and all dialogue is subtitled. It's fully accessible.

Remappable Controls: This game's controls are not remappable, although they're pretty basic—the left stick moves, Y switches between robots, X picks up boxes, and that's largely it.