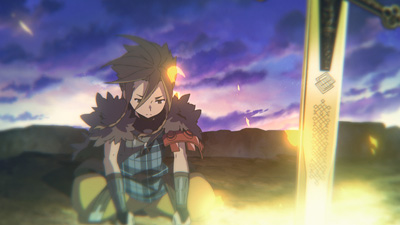 LOW The Grimoire system seems like it still needs work.

WTF What's with all the dead ends and empty rooms?

For fans of Etrian Odyssey, 2013 will go down in history as one of the best years ever. Not only were we treated to the absolutely fantastic fourth entry, we're now getting a second title—Etrian Odyssey Untold: The Millennium Girl. I don't know what we did to deserve such a treat, but I'm certainly not complaining.

For those unfamiliar with the series, all of the Etrian games share a similar structure. The top screen of the 3DS is where turn-based combat and first-person dungeon exploring happens, and the bottom screen is a grid where players draw their own maps using the 3DS stylus and virtual tools provided by the developers. Millennium Girl follows this same formula, but it's also special for a few reasons.

The most obvious one (obvious to people who've played the others, anyway) is that for the first time ever, the developers have included a traditional story mode with an expanded plot, animated cut-scenes, dialogue interludes and pre-defined characters.

Of course, earlier titles did have narrative elements, but the Etrian games have always been largely player-driven experiences. The norm is to create a party from a list of character classes and dive straight into the dungeon at hand, deriving entertainment from the incredibly nuanced battle systems and the freedom to customize skills and abilities. I've always been enamored with this content, but Atlus has recognized that some players need a little more, and the story mode is their answer.

(And by the way, series vets should have no worries—the make-your-own-party "classic" mode is still an option.) 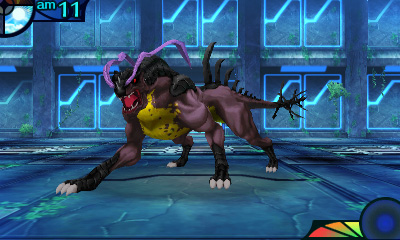 Although it felt quite strange to jump into an Etrian and not pick my own team, I like what Atlus has done with the story mode. The characters are well-written and appealing, and each is a memorable individual. Their assigned classes are well-balanced and have plenty of skills to ensure that newcomers will have no trouble staying alive. In fact, the wealth of available healing combined with a selectable difficulty level makes adventuring with Arthur the go-getter Alchemist, Raquna the rich-girl partier, Frederica the Gunner from another time (and all the rest) totally approachable by players of all levels.

The other big way that Millennium Girl diverges from the series is that it's not actually an all-new game. In truth, it's a renovation of the very first Etrian Odyssey, although between the fact that very few ever played the original and that so much of the game has been completely redone, I can't imagine anyone seeing it as a cash-in.

For those curious about how it actually stacks up, the same core content is still there, but the graphics have been completely redrawn in a beautiful 3D style with bright colors and expressive creature animations. The dungeons have also been redone, although they still have the same themes that they did the first time. Although I haven't played the first Etrian for several years, I immediately recognized certain floors and remembered key areas—it's impossible to forget the maze of floating lily pads, or the desert full of one-way sand, for example.

Overall, there's no question that Millennium Girl is another excellent entry in an excellent series. However, despite the fact that it's been masterfully refreshed, it comes directly on the heels of Etrian Odyssey IV: Legends of the Titan, which was… well, it was phenomenal. As such, Girl feels like a bit of a step back in small ways. Things like simplified skill trees, occasional empty rooms and passageways, and a sub-optimal class-specialization system feel a bit undercooked by comparison. To be fair, none of this is bad in any sense, it just doesn't feel as perfectly-tuned as I've come to expect from the recent titles.

I do feel like a bit of a spoiled bastard for complaining about stuff like that, though it's hard not to be when considering the incredible quality of the newer iterations. That said, the original Etrian Odyssey was a rough, brutal and vaguely experimental experience that I managed to complete out of sheer tenacity. In contrast, Millennium Girl takes the same content and makes it a thousand times more beautiful, approachable, and enjoyable for an all-new audience. It is a better game than the source material in every way possible, and I've got no problem recommending it to anyone (like me!) who's always up for more. Rating: 8.0 out of 10.


Disclosures: This game was obtained via publisher and reviewed on the 3DS. Approximately 35 hours of play were devoted to the single-player mode, and the game was not completed at the time of review. (I'm still working on the campaign!)

Parents: According to the ESRB, this game contains: fantasy violence, mild language, mild suggestive themes, tobacco reference, use of alcohol. The violence in this game consists of monsters getting whacked by the characters in utterly non-explicit fashion. We're talking Pokemon levels of violence here. Raquna the Protector comes off like a hard drinker, but she's never drunk and they don't explicitly say it's alcohol. I'm guessing the "suggestive" stuff is that some of the female characters are dressed on the scantily side, but it's pretty mild. Overall, I'd say this one is safe enough to give to any child who's old enough to handle the text and strategy required for success.

Deaf & Hard of Hearing: I'm very sad to report that there are no subtitles available for the animated cut-scenes. It's also worth noting that the characters often say helpful hints during the game like "watch out!" before an attack, or "try ice on it!" when battling a foe with that weakness. There are no subtitles for these, either. The game is still totally playable without sound, but it was disappointing to note that D/HH gamers will miss out on this extra layer of information.