Check out my arm! 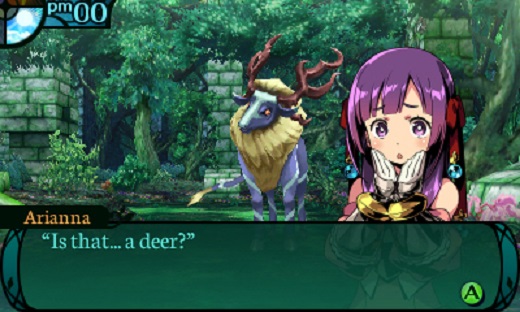 LOW I'm really tired of amnesia as a plot device.

WTF happened with the character art?

If I'm counting correctly, Etrian Odyssey 2 Untold: The Fafnir Knight marks the sixth release in the mainline Etrian series, but it's not a sequel. Actually, it's a remade version of the original Etrian Odyssey 2 from 2008, but there's no reason to see it as a rehash. Very few people played or knew about these games back then, and so much has been done to freshen it up that Fafnir can be called a brand-new adventure by anyone.

For those unfamiliar with the series, the top screen of the 3DS is where turn-based combat and first-person dungeon exploring happens, and the bottom screen is a grid where players draw their own maps using the 3DS stylus and virtual tools provided by the developers. It's all wonderfully polished and easy to use, but before a player can start, they must make a choice: Classic or Story mode.

In Classic, the player creates a party from scratch by choosing five characters from the available classes. They then head into the labyrinth to gain experience, level up skill trees, and craft a team whose abilities complement each other.

On the other hand, Fafnir is only the second Etrian game to ever offer a traditional JRPG-like story mode. For those who crave more than a straight-up dungeon crawl, the devs have crafted a quest that stars five specific characters, each with their own predetermined class. This team is balanced with a variety of skills that will enable players to quest successfully, and they all have their own personality and style.

Speaking about the game as a whole, it's clearly another winner in a long series of great games. The 3D graphics in combat are attractive, all the original systems are more polished than they've ever been, and there are plenty of tweaks that never existed in the original version.

For instance, the Floor Jump feature from the first Untold makes a return, and enables players to rapidly warp to any previously-traveled floor. Grimoire stones give players the ability to customize characters with skills they don't normally have, there's a new series of side activities involving discovering recipes and running a restaurant, the auto-map function takes the work out of drawing on the lower screen, map icons change appearance based on their functionality, and a wide range of difficulty levels mean that any player can find a good fit. There's very little to complain about in terms of production.

On the other hand, I have to say that Story mode didn't light my world on fire. While it was fine enough, I felt like it followed very standard JRPG lines, including the painfully-overused amnesia trope. The characters didn't stand out as being particularly likable or memorable, and while I had a few chuckles here and there, the tale was mostly boilerplate stuff.

An even bigger bummer? I'm pretty sure the new art created specifically for the dialogue scenes in Story mode was not done by series artist Yuji Himukai. Etrian games have always featured Himukai's art, and I love his distinct, flashy style. Seeing someone else's hand drafting these images just doesn't sit right with me—the art in these segments just isn't as tight or as eye-catching as it usually is.

I don't mean to come down too hard on Story mode since there's nothing wrong with it, it's just unremarkably average, and I abandoned it before finishing so that I could restart in Classic. This second run was a better fit since I could craft a different party and skip the dialogue that didn't grab me, but if it means newcomers have an easier ‘in' to the series, then I'm glad it's here. That said, the next time Etrian does something like this, the script definitely needs more pizazz.

Etrian Odyssey 2 Untold: The Fafnir Knight is a solid entry in a super-solid series, and it's actually a pretty good place for newcomers to jump in thanks to the accessible story mode, wealth of polish and adjustable difficulty. It's not my favorite in the series and it's not the best the series has ever produced, but when it comes to satisfying dungeon crawling, it's hard to go wrong with any of the Etrian games. This one is no exception. Rating: 8 out of 10.


Disclosures: This game was obtained via publisher and reviewed on the original 3DS. Approximately 18 hours of play were devoted to the single-player mode, and the game was not completed. There are no multiplayer modes.

Parents: According to the ESRB, this game contains: alcohol reference, fantasy violence, mild language, and partial nudity. The violence in this game consists of monsters getting whacked by the characters in utterly non-explicit fashion. We're talking Pokémon levels of violence here. I'm guessing the ‘suggestive' stuff is that some of the female characters are dressed a bit scantily, but it's pretty mild. Overall, I'd say this one is safe enough to give to any child who's old enough to handle the text and strategy required for success.

Deaf & Hard of Hearing: I'm very sad to report that there are no subtitles available for the animated cut-scenes. It's also worth noting that the characters often say helpful hints during the game like "watch out!" before an attack, or "try ice on it!" when battling a foe with that weakness. There are no subtitles for these, either. The game is still totally playable without sound, but it was disappointing to note that D/HH gamers will miss out on this extra layer of information.