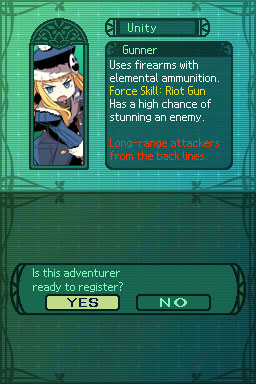 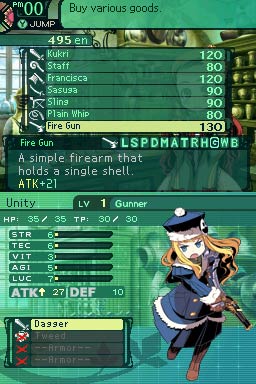 I'll be perfectly frank with you—I did not expect to like this game.

Grinding for experience, going broke buying equipment that only increases a character's strength by two points, drawing a map by hand through floor after floor of twisting labyrinth, and being crushed by random encounters in the first round of battle are not things that I generally look for in my RPGs. In fact, I would generally say that these are all characteristics of outdated game design best left in the 16-bit era and forgotten.

Knowing that this back-to-square-one approach was taken by Etrian Odyssey II: Heroes of Lagaard long before I turned my DS on, I was all set to grit my teeth and power through what I expected to be a few days of boredom potentially bordering on torture.

I did not expect to like this game, but when all was said and done—I loved it.

Set inside a giant, multi-story labyrinth, Heroes of Lagaard features only the thinnest of plots (basically: go explore!) before asking players to put together a party of five characters and sally forth into the salivating, open, and all-too-hungry jaws of danger.

It's a rough start.

Even after combing through the instruction booklet, I felt a little at a loss as to where to begin. With essentially no tutorial and a choice of nearly a dozen character classes right off the bat (What's a Hexer? Is a Dark Hunter better than a Protector?), trial and error is the name of the early game. I put together what looked like a balanced team and headed out into the first floor of the labyrinth, only to die about three minutes later in flames of utter annihilation. A little shellshocked by the defeat, I tried again and got a little further.

During this painful process, a long-dormant part of my brain started to tingle, and synapses that helped me survive some of the roughest games of yesteryear flared to life. Instant death?  Progress measured literally in pixels? I hadn't needed to deal with such things in what felt like an eternity, but the instincts were still there. Shaking off defeat, the primordial gamer inside me stretched its muscles and welcomed the challenge.

I don't mean to scare anyone off, but I'm not going to mince words: Etrian Odyssey II is heartlessly brutal, making the player claw and scrape for every minuscule victory until hitting the magical plateau of level 10, or thereabouts. Once reaching this critical mass, I found that the game became slightly less lethal and the ability to survive an encounter with three hedgehogs caused my confidence to grow.  Not by much, but it grew. 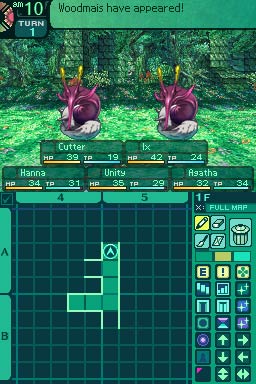 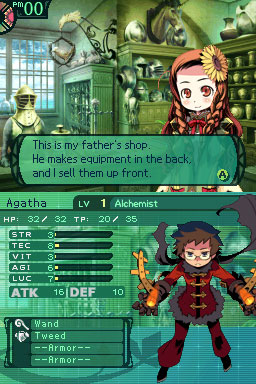 What helped this experience avoid feeling like punishing drudgery is that despite all the deaths and difficulties, the game begins to open up once a player learns the rules and understands what's being asked of them. It may take a while and certainly nothing is handed over freely, but it is there for the taking and the feeling of achievement is much more substantial when it's earned after so many hard knocks. Although I'd say that in most cases difficulty curves as extreme as the one here are grave mistakes, Etrian II's designers absolutely know what they're doing and stopped just shy of making me toss my DS out a window.

Besides the deceptively masterful difficulty balancing, every aspect of Etrian Odyssey II has been vetted and manicured to ensure that there's nothing irritating or tedious once a player has come to grips with the frequency of death. For example, the mapmaking system utilizing the DS touchscreen is as smooth as silk, letting players chart their path using the stylus to draw or deploy premade icons. The genius move is that what a player has drawn will be saved even if they meet defeat, so the heart-wrenching feeling of lost progress never really factors in. Every square illustrated on the map helps stave off defeat the next time by locating dangers and showing safe passages for the next journey.

Everything else is just as refined. The comparative strengths of equipment can be seen at a glance before purchase, multiple types of the same booty can be sold at once, the translation is flawless, the auto-battle feature is a thumb-saving godsend to power through low-level battles at warp speed, the use of certain overpowered enemies as physical obstacles is a true innovation, and the ability to save is never more than a moment or two away. They've thought of everything.

More than being a just well-put-together game, the developers have demonstrated their peerless mastery of the genre by going even further and giving a substantial degree of control over the actual time invested by the player—there are options to either reconfigure a character's skills or to "reset" the character and completely change their class if so desired. By recognizing that a player's time is valuable and not punishing them for making mistakes as they learn the game, any hours devoted to leveling up a character chosen or cultivated in error are completely salvageable. In a word: genius.

Etrian Odyssey II: Heroes of Lagaard seems like it couldn't be more inside the box, but the planning and careful craftsmanship behind it displays thinking that was far outside. This shining example of old-school design infused with new-school wisdom completely destroyed my expectations and delivered a supremely polished and challenging adventure that only grew more rewarding the further I went.

Parents, you really don't have anything to worry about. Quite honestly, it seems like the ESRB is working harder and harder to find tiny little nuggets of something to put on the back of game boxes these days. Suggestive Themes? Mild Language? I don't have the faintest clue what these labels are referring to. The Alcohol Reference is (I assume) since one of the areas in the game is a bar and the owner references drinks sporadically. The Mild Fantasy Violence amounts to seeing a "whoosh!" visual effect as an invisible weapon strikes a monster who shows absolutely no reaction. This isn't violence, it's the faint suggestion of violence… against fantasy monsters… with no animation. I'd be quite comfortable letting my six-year-old play this game, assuming he could get over the difficulty curve. (Which most kids probably won't.)

Old-school gamers are in for a real treat. This game takes the structure and style of things that we grew up with, and updates them just enough to make it completely playable by including modern amenities and a revised sensibility in terms of design. If you ever played a game that required you to draw a map on a piece of paper—and you actually liked it—then you'll probably love this. The fact that it's a perfect fit for a portable and very easy to play in small chunks is just icing on the cake.

Deaf and Hard of Hearing gamers will have no problems whatsoever. I personally played about 90% of the game without any sound, and encountered no barriers. All dialogue in the game is presented through text, and since it's a turn-based combat engine, there is no need to rely on sound cues or anything aural. All important information is presented on-screen, and the experience is completely accessible from start to finish.

I liked that you jumped right to the point with your writing.

You know what, your doubts about JPRGs are common and worth mentioning. They really add insight to the review.

Hey there. i wrote the review after the 25th floor (mostly because i told Atlus i’d get it out ASAP and the game took WAAAY longer than i thought it would…) but as of right now i’m on the 30th floor and just grinding for a little more experience. i know everybody at GameFAQs has a lot of love for the War Magus, but i’m really not liking that i switched my Medic over to be one. i’m a little bitter, really. anyway, nothing from floors 26-30 really affects the review and techically credits *did* roll after the 25th, so… Read more »

It’s nice to see this wonderful title get a bit more love then the last one did (penny arcade even talked about it a few weeks ago). Both games are great examples of how old school design can still be relevant and playable in this HD obsessed generation.