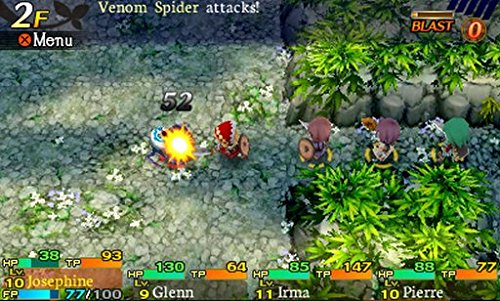 HIGH It's great to see a Wanderer again, even if it's not the Wanderer.

LOW The whole thing needs a bit of a rethink.

WTF The team's going south. Why is my healer going north?

Video game mashups can be a great thing. Taking two different IPs and blending them together can create something that's just as good, if not better than the original. At the very least, seeing concepts, characters and systems spun off into different contexts can deliver a refreshing romp for fans of the source materials.

Atlus has recently been on a winning streak when it comes to mashups, the most recent example being when the white-hot Persona franchise married into the cult hit Etrian Odyssey. The result was Persona Q, a superb, balanced combination showcasing the best that those IPs had to offer.

Atlus has now taken another stab at mashups, this time merging Etrian Odyssey and the long-running roguelike Mystery Dungeon. However, unlike Persona Q, the two halves of Etrian Mystery Dungeon don't feel like they're a good fit. This mashup is just mash.

The first thing that struck me is that the game begins poorly, or rather, it doesn't really begin so much as things just start. There's very little introduction or motivation given. Basically, it's just "go explore" which I guess is fine enough sometimes, but a little more impetus would've been good. It feels like the developers are assuming the player is already familiar with what's going on in either (or both) of these halves, and they don't waste time on setup.

Essentially, there are a series of multi-level dungeons with side-dungeons attached to them, and it's up to the player to get to the bottom of each one… Because.

Players will put together a party of up to four characters, and the classes are taken directly from the Etrian series—Landsknechts, Dancers, Gunners, Medics, and so forth. The entire cast will be familiar to anyone who's played those titles, and there's also a new class, the Wanderer. This one's inspired by 2008's magnificent Mystery Dungeon: Shiren The Wanderer and its sequels, and it was nice to see an homage here.

Once a party is created, the game (mostly) plays out in traditional Mystery Dungeon fashion. It's a classic roguelike at heart, which means that the player takes one action, and then all of the other creatures in the dungeon take their own action before the player goes again. It's designed to be methodical and strategic, emphasizing a constant, careful use of resources in order to successfully manage the party's life and hunger levels while navigating loads of traps, surviving status effects, and not getting mobbed by creatures.

This sounds all right on paper, but having a whole party in a dungeon feels a lot different than the traditional design of having only one person. The AI handles the three members who are not under direct control, but the player can switch between them. I will say that the AI does a decent job in most cases, but it occasionally makes bizarre choices—once when I was in dire need of healing, my Medic left the group and wandered away when I needed her most. Why? No idea! In these times I'd have to take charge of things directly, and managing this many characters in strict turn-based fashion feels clunky and slow.

Besides all the extra turns required, this clunkiness is compounded by the devs apparently not only keeping nearly every system from both games, but also adding new systems on top. Instead of the sensible, streamlined elegance of Persona Q, Etrian Mystery Dungeon feels like it's way too busy, and drowning in menus. For instance, if I'm in control of my lead character (usually a fighter) I need to actively switch control of the party to my Alchemist in order to cast a spell, rather than simply casting it from a menu which accesses the skills of the whole party—it's a few too many unnecessary extra steps for simple RPG actions.

The combat itself doesn't make a lot of sense, either. Many of Etrian‘s straightforward character skills translate cleanly, but nuanced abilities designed to trigger and buff an intricately-balanced first-person JRPG party just don't fit in Mystery Dungeon's framework of third-person positioning. Interestingly, the game offers the ability to "turn off" selected powers for each character. Ostensibly it's to make sure the AI uses them the way the player wants, but it also suggests that some of these powers just don't function well in this setting.

Another issue I had was that the game follows the Mystery Dungeon style of play too closely in an overall macro sense. Each dungeon is a series of large rooms connected by narrow hallways, and very little of interest happens in them—most of the time, it's just wandering around, picking up items that I never felt the need to use, and looking for an exit. The player will come across random NPCs who want to join the party, but my party was always a full four, so these encounters weren't of value. I also never came across points of interest or unusual events of the kind that are commonly found in Etrian. Too much time was spent going from room to room, hallway to hallway, killing monsters with no real motivation for doing so, and managing systems that were cumbersome and unsatisfying.

I love the Etrian Odyssey series and Shiren The Wanderer is quite possibly my favorite roguelike of all time, but not everything can come together as deliciously as chocolate and peanut butter. The two franchises here don't complement each other in any beneficial way, and the end result comes off as ill-fitting and awkward. People looking for a dose of Mystery Dungeon action could certainly do worse, but this melding needs fewer systems and a more streamlined design. On the level of Persona Q, this mashup is not. Rating: 5 out of 10


Disclosures: This game was obtained via publisher and reviewed on the original 3DS XL. Approximately 14 hours of play were devoted to the single-player mode, and the game was not completed. There are no multiplayer modes.

Parents: According to the ESRB, this game contains: alcohol reference, fantasy violence, language, mild blood, and mild suggestive themes. Despite all the warnings, the game is pretty harmless. The violence is cartoonish sword-whacking, and one area of the game is in a tavern or somesuch… Absolutely nothing during my playtime stood out as worthy of warning. I'd let my kids play this, no problem.

Deaf & Hard of Hearing: All dialogue is subtitled and no audio cues are relevant to gameplay. It's fully accessible.