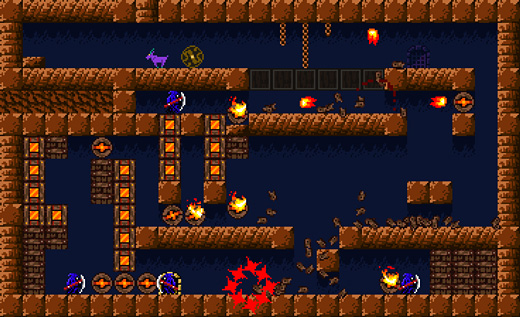 HIGH Getting that "Aha!" moment after stalling out on a tough puzzle.

LOW Not getting that "Aha!" moment on Final Path #8.

WTF Where's the canoe I was promised?!?

I'm not quite sure exactly why, but it seems as though Xbox Live Indies and the channel itself have been dropping off of people's radar. There are various factors at play (not the least of which is that many of the offerings are pure crap) but there are still quite a few gems to be discovered. One of the most recent? Escape Goat

Created by Ian Stocker, the man behind both of the excellent SoulCaster games, Escape Goat's premise is that a goat (yes, an actual goat) has been imprisoned for witchcraft deep inside a sinister fortress. In order to escape, the goat must get through a number of puzzle rooms, none of which can be solved simply by putting a key into a lock. Instead, this impossible prison is broken up into clusters which share common themes such as ice, saw blades, crumbling blocks, and so on.

The goat in question is a nimble barnyard animal, able to double-jump and dash both on the ground and in the air. However, platforming skill and speed alone are not enough. To assist in the egress, the goat joins forces with a mouse who's also been imprisoned. Don't judge him by his size, though—this rodent's got some sweet tricks in his furry little pocket.

For example, the goat can leap a certain distance and then launch the mouse through the air to cling to a nearby wall. Once there, the mouse can scale vertically and fit through tiny openings in order to hit switches or distract enemies. With the aid of a magical hat found in certain areas, the two animals can also instantly switch places with each other, adding yet another technique to their puzzle-solving arsenal. Having just the goat would have been good, but the combination of goat and mouse together? It's pretty damned clever.

Although Escape Goat seems simple at first, the rooms can be head-scratchers that push players to try different approaches. Sometimes, the answer requires nothing more than good reflexes to dodge a hazard or to nail a tricky jump. Other times, using logic and figuring out the correct sequence of moves wins the day. Stocker's got a great variety of puzzle types on tap here, and if a player gets tired of a certain area, the option to leave and go to another section is always available. That said, the level of overall difficulty is quite reasonable, and I found myself at a complete loss only once.  My feeling is that Escape Goat's challenge will land in the sweet spot for most players, something of a rarity on XBLI.

Anyone interested should do themselves a favor and download the free trial now available. It may not have a million-dollar budget or eye-melting special effects, but gameplay is what counts and Escape Goat

has it in spades. Even the most jaded triple-A gamer will be able to see that this indie is a cut above most XBLI titles, and it's certainly worthy of the less-than-a-latte $3 purchase price. Don't miss it. Rating: 8.5 out of 10.


Disclosures: This game was obtained via paid download and reviewed on the Xbox 360. Approximately 2 hours of play were devoted to the single-player mode, and the game was completed. There are no multiplayer modes.

Parents: This game is not rated by the ESRB, but if it was, I can't imagine it would be anything other than E 10+. Although the goat will "perish" many times in the course of escaping the prison, the graphics are not gory in any way and death essentially means that the puzzle room must be started over. The tone of the game is slightly grim, but I would have no reservations letting my children play it.

Deaf & Hard of Hearing: You won't have any issues. All indication in the game happens via text, and there are no significant auditory cues needed for gameplay. It's totally accessible.