The Ninja, The Skipper and The Douche 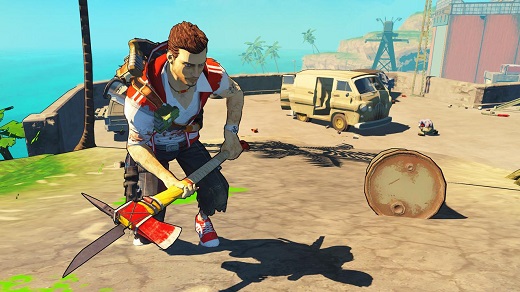 LOW The final sequence of battles is awful.

WTF Exactly how much rope is Cliff carrying?

I can't pinpoint exactly when it happened, but somewhere during the PS3/360 era, the "mid-list" game started to vanish.

There's no strict definition of what a mid-list game is, but I think of them as titles that have small budgets and small teams, more than a few rough edges left by the time they ship, and they're usually built around one or two experimental ideas – they're bigger than indies, but definitely not triple-A.

As someone who doesn't need the latest bells and whistles to have a good time, these were often the most interesting and exciting things to play because they took risks and tried bizarre, unproven formulas. Unfortunately, they're much fewer and further between these days, and when they do appear, they're slammed or ignored because they aren't as shiny as triple-A releases.

Escape Dead Island is a perfect example of the kind of mid-lister that I'm referring to. It's narrow in design, limited in its features, and clearly does not have a huge budget. That said, it stays focused on what it wants to do and offers things to chew on for players who've acquired a taste for something a bit different.

To set the scene, Escape is a sidestory tying into the plot of the original Dead Island. While all hell was breaking loose on the tropical, zombie-infested Banoi, a privileged rich kid named Cliff Calo catches wind that the nearby island of Narapela might actually be where all the trouble started. He drags a couple of friends along to play at being investigative journalists, and they "borrow" his dad's boat to get there. Once they arrive, it's not long before things head even further south than they did.

As a mid-lister, the most important thing to know about Escape Dead Island is that it's all about the narrative. The third-person combat is basic, the stealth is rudimentary, the island is small, and the animation is limited. I don't say these as negatives, though – they get the job done satisfactorily, and the dev team would have been foolish to bite off more than they could chew. Instead, they wisely focused their efforts on making Cliff's rapidly-degrading mental state the reason to play. 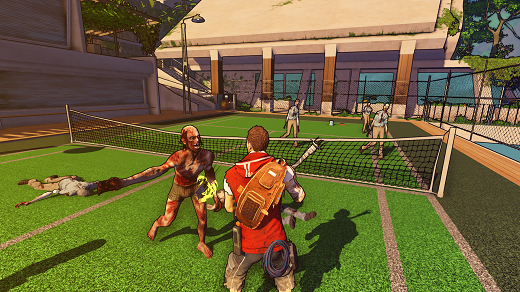 With the proper expectations set, Escape turns out to be a rather entertaining ride into madness. The adventure starts off as expected, but it becomes increasingly more difficult to tell what's real and what's not. I'm reasonably certain the zombies were genuine (or were they?) but when the sun starts falling out of the sky, or when a hallway suddenly looks too much like a subway tunnel (complete with rapidly-approaching train) the player is constantly kept off-balance. Even the way death is handled is a perfect fit — when Cliff gets killed, he wakes up as though it was just a dream.

Nothing Cliff says or does can be fully trusted, and the things that happen were more than enough to keep me interested for its brief duration. In fact, playing something with such a tight focus was quite refreshing. I enjoyed the simplicity of the formula as a nice change of pace from more complex things I've spent time with this year, and Escape ended before it wore out its welcome – something I can't say about many other games lately. However, the developers make a few small errors in design (to be expected with a mid-lister) and one egregious one.

The mild irritations were things like checkpoints being a little too far apart, or not being able to tell exactly when (or what) the game is autosaving. There are too many spitting zombies in "sniper" positions, and unskippable cutscenes before fights where a player is likely to die were also a bad call. This stuff is hardly a big deal given the context, though.

However, what was a big deal was that the developers show a complete lapse of good judgment at the finale. For some unfathomable reason, they thought it would be a good idea to include a series of grueling combat sequences against crowds that are much harder than anything else up to that point. This cheap nonsense flies in the face of the story being the game's raison d'etre, and adds absolutely nothing to the dramatic value of the finale. These end fights are an unforgivably bad decision, and while I was invested enough in Cliff's tale to power through, I imagine many people might call it quits right there. For shame, Fatshark.

Apart from that absolutely baffling meat grinder at the end, I'd still recommend Escape to fans of the mid-list. 98% of it was an enjoyable spiral into insanity, and the project could certainly stand on its own even without being attached to the Dead Island franchise — just be ready to slog through that final bit to see how it all wraps up. Rating: 6.5 out of 10.


Disclosures: This game was obtained via publisher and reviewed on the Xbox 360. Approximately 8 hours of play were devoted to the single-player mode, and the game was completed. There are no multiplayer modes.

Parents: According to the ESRB, this game contains: Blood and Gore, Intense Violence, and Strong Language. Although the art is bright and colorful, there are some fairly gruesome scenes (heads getting crushed in, zombies getting stabbed in the neck with screwdrivers, etc) and there's not much that's kid-friendly about a man slowly going insane on screen. Keep the kiddies away.

Deaf & Hard of Hearing Gamers: No real problems here. Dialogue is subtitled, and although some zombies give audio cues, simply spotting them visually is easier and more reliable. Keep your eyes open and you'll be just fine.

Nier was incredible. And the music! Oh man. But alright, makes sense. I tend to like those games more, haha.

Yeah, I would totally consider those to be mid-listers for sure. Anything that’s not triple-A but not an indie either.

(and Nier is awesome… WAY better than a lot of triple-A, IMO)

Out of curiosity, would you consider mid list games to be titles like Nier or El Shaddai?

I love those games. Stuff with good idea and not necessarily the best production value. Still a ton of fun.

Hey Philip! Thanks for the comment. I haven’t seen that article, I’ll google it. = ) As for the choices, there were no player-directed choices that i saw, everything seemed fully scripted. Regarding the ending, PR told me that the story changes with a second playthrough. Dan Weissenberger (another writer here at GC) went through the game a second time and reported that almost nothing changed. However, neither he nor I were able to access a series of locked hatches throughout the island. Maybe those have more story behind them? No idea. From what i saw though, it seems safe… Read more »

Glad to hear that you liked it. The mind-screw plot does sound intriguing, but I watched Jim Sterling play some of it and the presentation put me off.

Games Radar did an article on what you call “Mid-List” games, though they called it the “7 / 10” game. I’d recommend it if you find the time (and if you can find it – their site’s gone a bit ign lately).

Also, I’d just like to ask if Escape Dead Island has multiple endings or story choices – I’m a real sucker for that stuff, and there’s no mention of it in the review.