HIGH Finding the graves of my previous (and unsuccessful) characters.

LOW Donning a cursed item and not finding a Remove Curse scroll for 30 floors.

WTF How close I came to getting killed (twice) on Level 50.

As one of the first releases of 2010's Xbox Live Indie (XBLI) Uprising event, Epic Dungeon is a great champion leading the charge in the battle for better software. Massage apps and virtual fireplaces had better watch out… the real game developers on XBLI aren't taking it any more.

Coming from small dev house Eyehook Games, Epic Dungeon is exactly what it sounds like—it's a dungeon, and yes, it is indeed epic. Hyperbolic adjectives aside, the title is comprised of fifty randomly-generated, fantasy-themed floors full of nasty baddies that the player must survive in order to get back to the outside world, but there's more to it than just that. Much more.

At the outset, players are presented with a choice between four different types of characters: the Berserker, the Tinker, the Shaman and the Gambler. Each can attack melee-style, and each has their own special ability. For example, the Berserker can swing his sword in a circle, devastating all nearby foes. The Shaman can freeze nearby monsters solid for a few moments, and so on.

From that point, play is simple and streamlined. Defeating enemies yields gold and experience. The gold buys items in goblin-owned shops, and the experience (naturally) is used to level up. Each level grants points to be distributed between Attack, Defense, Dexterity and Luck. Occasionally, points will be granted for use on secondary abilities. The Berserker can enhance his native sword swing, but the talents of the other classes can also be learned (or not) as the player sees fit.

While Epic Dungeon as I've described it so far may not seem all that special, what makes it such an exemplary experience is how it blends several different types of RPG elements together so masterfully. This is one game where the glory certainly lies in the details. 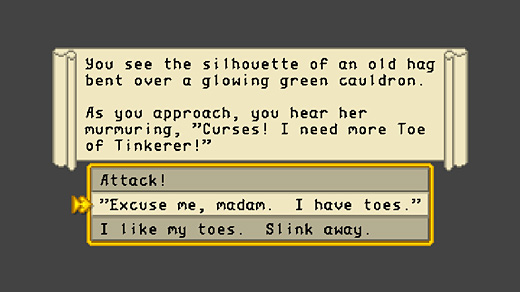 The biggest noteworthy twist is that combat happens in real-time. Monsters of all kinds pop into existence and will rapidly pursue the player once they approach within a certain distance. The fights start out being quite manageable, but get hairy before long. In fact, on later floors, it only takes a second for a situation to go from sedate to suicidal.

This focus on action isn't unique, but combine it with a bit of DNA taken from the Roguelike genre (character death is permanent) and then things start to sizzle—There are no backup saves to load nor Phoenix Downs to use if the monsters in the dungeon get the upper hand. One death and that's it; lights out, game over. Yes, really.

Such a significant consequence may initially seem too harsh, but it's balanced out by finding random items scattered throughout each floor. With so much at stake, combing every inch of territory for a +3 sword or a +10 suit of armor quickly becomes serious business. When such an item is found, the burst of joy from improved odds of survival is undeniable.

With all these factors taken into account, Epic Dungeon's adrenaline factor stays high throughout, and the game's balance of perma-death, quick reflexes, management of onscreen elements, and scavenging of experience/gear is sublime. Each element supports the next, and nothing feels out of place.

With the gameplay formula completely dialed-in, other little touches make a delicious dish even sweeter. For example, players will occasionally find clever (and humorous) text-based situations that call for immediate choices, and finding my previous character's grave after an unsuccessful run brought a big smile to my face as well. Little adds like this show that Eyehook has a great grasp of RPG history and awareness of what can make a good game into a great one.

…Oh, and by the way, have I mentioned that the game costs one dollar?

Absurdly affordable pricetag aside, the kind of intelligent synergy on display in Epic Dungeon's design is a master class of elegance that proves eye-melting graphics or hours-long cut-scenes don't mean a thing if the underlying structure is flaccid.  I can honestly say that I enjoyed my time with this title far, far more than the vast majority of big-budget releases I sat down with this year, and if the rest of the Indie Uprising titles are even half as good as this one, 2010 is going to end on quite a high note. Rating: 9.0 out of 10.

Disclosures: This game was obtained via paid download and reviewed on the Xbox 360. Approximately 3.5 hours of play were devoted to the single-player mode, and the game was completed. There are no multiplayer modes.

Parents: This game is not rated by the ESRB, but I can say that it's quite harmless. As is plain to see from the screenshots, the graphics are quite simple and not explicit in the least. Combat is bloodless, and the action portrayed here is essentially made up of rudimentary icons floating around on-screen. It may be too difficult for young ones, but there's no questionable content to be concerned about.

Deaf & Hard of Hearing: Have no worries. There is no spoken dialogue in the game, nor any important auditory cues, either. Everything needed to enjoy the game is clearly displayed on-screen, so feel free to jump in. There are no auditory barriers.

I agree, it is an important detail.

>>>>The biggest noteworthy twist is that combat happens in real-time. Monsters of all kinds pop into existence and will rapidly pursue the player once they approach within a certain distance. The fights start out being quite manageable, but get hairy before long. In fact, on later floors, it only takes a second for a situation to go from sedate to suicidal.

Huh, nowhere in this review can I figure out if the game is turn based or continuous, or otherwise. Seems kind of an important detail.