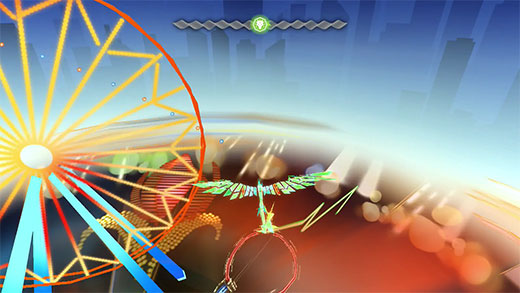 HIGH It's a cool concept.

LOW There's nothing else to it.

WTF They're not really apart. I mean, the two can, like, touch at will…

Although video games are absolutely a visual medium, I'm of the opinion that they can't survive on visuals alone. Case in point, Entwined from Pixelopus.

This indie title starts off with rich visual imagery—a fish and a bird are apparently in love, and they're separated. At least, so it seems. The colors are bold, the designs are semi-abstract, and everything makes a strong first impression. However, once past the visuals, it doesn't have much to say for itself.

The gameplay consists of both the bird and the fish flying inside an abstract tunnel-like area in space, so while Entwined makes a big deal of telling the player the pair is "always together, forever apart," it doesn't really jibe. The pair are literally right next to each other at all times. They can even touch, so I didn't get a lot of forever apart here.

The point of gameplay is to pass each animal through correctly-colored zones in the tunnel; the fish goes through orange spaces and the bird passes through blue. Each of the creatures is controlled by its own stick on the dualshock, so maneuvering them both at the same time can be tricky. However, once the player gets into the groove, there's nothing else to it. The first level plays exactly like the last, and no variations materialize.

After completing a stage, the player is awarded with a short scene of the bird and the fish merging into a dragon. This dragon gets to fly around an open area, and… that's it. There's no resonance or resolution in what happens. There's not even a conflict to begin with.

Worse, the gameplay itself doesn't make much sense. I don't understand why these animals fly through what are essentially rings in space (the fish isn't even underwater!) and the design of the rings doesn't carry a message. For example, at certain points it felt as though the layouts were suggesting that the animals were flying apart, but those quasi-thematic instances only lasted for a few seconds at a time. After maybe picking up on a message, the game would go right back into random designs without any result or import.

I completed Entwined in about 90 minutes, and I was bored with it halfway through. I pressed on in the hope that it was going to lead somewhere, but it didn't. The colors are pretty and seeing animals fly through space is pleasantly trippy, but without any deeper craft underneath the gloss, Entwined is far too shallow and far too forgettable. Perhaps if it tried to say something, it could've been another small-studio surprise worth recommending. As it stands, it's an underdeveloped flash in the pan, and it burns out quicker than most. Rating: 4 out of 10.


Disclosures: This game was obtained via paid download and reviewed on the PS4. Approximately 1.5 hours of play were devoted to the single-player mode, and the game was completed. There are no multiplayer modes.

Parents: According to the ESRB, this game contains no content warnings. It's a bird and a fish in space, flying through rings… I can't imagine anything less offensive.

Deaf & Hard of Hearing: There's no dialogue, and no audio cues necessary for play. It's totally accessible.