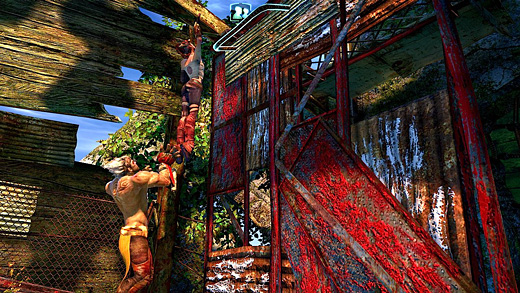 Jennifer Allen over at Resolution Magazine in the UK was gracious enough to forward a link to an article, in which writer Mark Raymond discusses likely reasons why the recent Enslaved: Odyssey to the West has underperformed spectacularly, as some would say.

It's a very well-written piece and exactly sums up my own thoughts—specifically that the buy-in price of $60 is much too high for a game which is known to be a "one time through" kind of experience, in addition to its status as an unfamiliar IP.

If you ask me, this situation with Enslaved was exactly the sort of instance when the industry should have rolled out a lower price point to reflect the relatively small amount of content on the disc, in addition to enticing more people on a budget to take a risk on something that they may or may not like. As much as I hate to say it, $60 is just too much for a game of this sort and as a critic, I would've had a much easier time recommending Enslaved if it had launched at $30 or even $40.

It sucks to factor economics into the critical equation, but that's just real life. I sincerely hope that the industry will snap out of this one-price-point-rules-them-all mentality and realizes that the people buying their games aren't made of money.

Speaking of new IPs, today Atlus announced a brand-new one: The Cursed Crusade. Not much is known about it, but it seems as though they might be trying to capitalize a bit on the success of their recent superstar (and my game of the year for 2009) Demon’s Souls… And you know what? That would be absolutely all right with me. Check out the debut trailer below and see what you think. It's certainly got my attention.

The likely perception that a game introduced at a lower price point is not as good as one released at the regular price is the reason I doubt you will find the industry adopting your recommendation, Brad. I for one don’t think the “time” spent playing a game is that important to it’s value, and I would rather play a short, well-crafted game than one that just padded levels with repetitive gameplay. So the shortness of Enslaved didn’t stop me from buying it. Also, you can always play a game and trade (or sell) it back, and thus lower the… Read more »

Hey Alv, >>Excuse my ignorance, but is the publisher or the retailer to blame? >>i) Who prices games in the first instance: the retailer or the publisher? From what I understand (and if someone out there knows more about this, please feel free to correct me) the publisher is the one who sets the suggested retail price. >>ii) Is there a wholesale price that publishers sell games onto retailers for? That’s correct. I don’t know specifics and it may vary from publisher to publisher, but the general information I get is that retailers make a very slim profit on each… Read more »

Apparently THQ is looking into selling games around the 40 dollar mark. See for your self.

I think one of the biggest things keeping games a niche purchase is the sticker shock. Every other piece of entertainment we North Americans consume (books, movies, music) exists within this 10-30 dollar pricing window. People are comfortable with that price, they know that whatever thing they want to buy to be entertained, it’s going to cost around 20 bucks. Video games cost three times as much as everything else – and people sense that the majority of them just aren’t worth that much more than a movie or a CD. Games priced under 30 dollars fall into the ‘impulse… Read more »

Excuse my ignorance, but is the publisher or the retailer to blame?

i) Who prices games in the first instance: the retailer or the publisher?
ii) Is there a wholesale price that publishers sell games onto retailers for?
iiia) Or is there a ‘recommended’ retail price that forces retailers to sell games at a certain price, a percentage of which must go to the publisher.
iiib) If so then when is a retailer free to apply discounts?

Hey Pat! >>But I would argue that want publishers start taking a stance where they price a game at less than 60 dollars, maybe even 40 dollars if we are lucky, what is keeping them from pricing a game like Castlevania: LOS, at 70 dollars, because of the amount of content it offers. Better yet, why not sell Morrowind for 100 dollars because it offers 200 hours of content. The logic behind the argument still holds. The only thing keeping publishers from pricing their games at a higher level is the fact that they know consumers will balk. Taking an… Read more »

Hey Brad, I agree not all games are not 60 dollars. Would I pay 60 dollars for Enslaved, even though I want it? Probably not. Is it still a quality game? I think it most likely is. But I would argue that want publishers start taking a stance where they price a game at less than 60 dollars, maybe even 40 dollars if we are lucky, what is keeping them from pricing a game like Castlevania: LOS, at 70 dollars, because of the amount of content it offers. Better yet, why not sell Morrowind for 100 dollars because it offers… Read more »