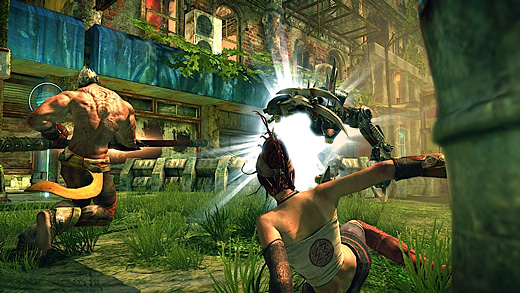 Like many of you, I gave the new Enslaved demo a whirl. From developer Ninja Theory, it's a new spin on the classic Chinese tale "Journey to the West"—although it takes so many liberties that I don't think anyone could be blamed for not immediately noticing the inspiration.

Anyway, I can't say that I was a very big fan of Ninja Theory's first work, Heavenly Sword, but from what little was shown in the demo, Enslaved seems to have its head in the right place. I like the overall concept in general, and it's pretty clear that the developers are going for a big-budget slam-bang action sort of thing. Nothing wrong with that in my book, though I'm guessing it's probably going to be more of a quick-play wowee-weekend rental than something worth dropping sixty bones on.

As far as negatives go, the controls felt a little loose to me, and I can't say that I'm a big fan of the "auto-play" mechanic on display. What I mean by that is that there were a few times when the main character needed to jump to a certain spot, and the spot I was attempting to go to wasn't actually the right one. Instead of falling to my death, the game auto-moved me to the correct spot even though it wasn't my intent, basically eliminating any sort of skill needed to make the jump.

Don't get me wrong—I'm no fan of needless or repeated deaths in any game, but I also don't need to have my hand held every step of the way. I am grown up enough to be responsible for properly jumping. That's all I'll say at this point since the demo was quite brief, but while I'm not one of those players who pines for the "good old days" when difficulty curves beat you down with a vengeance, I do think there is such a thing as being too nice to players.

For technical comparison purposes, I downloaded the demo for both PlayStation 3 and Xbox 360, and after having looked at both back-to-back, I'm definitely going to be going with the 360 version. The graphics looked sharper and crisper, and the color palette didn't seem to bleed together as much as it did on PS3. It also may have been my imagination, but the control felt a little bit tighter, too. Whether that is the system, or the quality of the sticks on the Dual Shock, I'm not sure. (Probably the latter.) Whatever the case, the decision was pretty easy to make.

Also spent a bit of time with the demo for Arcania: Gothic 4. I've never played any games in the Gothic series before, but Arcania immediately reminded me very strongly of Risen—hardly a surprise since Risen's developers were responsible for the first three games in the Gothic series. Development of Arcania has been handed over to a new team, but many similarities were immediately apparent.

Without going into a lot of detail, I will say that although this is a type of game that generally holds a lot of appeal for me, I've recently played through Risen and Divinity II, and Two Worlds II is close on the horizon. I can only play so many of these types, and just putting in fifteen or twenty minutes on the demo made me feel like I was already starting to burn out.

It probably didn't help that you get hit with a silly string of quests right away, and the world might not be quite as open as it first appears. After trying to cross a bridge and being turned away by some schmuck with a gopher problem, I figured I could just jump across the river a bit upstream since the gap wasn't that wide. I made the jump easily, only to hit an invisible wall preventing me from moving on. I'm hoping that was something for the demo's sake, because that kind of limitation in a game of this sort is a major no-go for me.

To be perfectly frank, I'm sure I will play this game at some point since I can never seem to stay away from them, but I definitely need to pace myself. At this point I'm going to hold off on any more in this genre until after Two Worlds II. 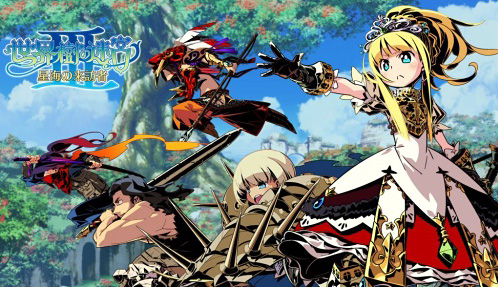 In other games news, I'm quite proud to say that I finally rolled credits on Etrian Odyssey 3. It took me quite a bit longer than expected (although in my defense, I did get sidetracked for a bit with work and illness) but it's finally done.

Despite the game being the most player-friendly of the three in the series, I have to say that I was still a bit surprised at how easy the final bosses were. I honestly think I had more trouble with some of the mid-game bosses than the ones at the end. They were so easy, in fact, but I kept waiting for another final surprise encounter to be the "real” one, but it never came.

(Now that I've shot my mouth off about it, I will say that my wife took the alternate branch in the story and she reported that her final bosses, a different pair, were quite a headache. Also, there is the “ultimate boss” at the bottom of Floor 25, but I really can't justify putting any more time into the game with everything else that's backed up in my review queue. I'm sure *that* thing would give me a real run for my money, no doubt.)

…Anyway, for those who care, here's a bit of stat geekery:

The Gladiator was basically my tank/damage dealer for most of the game until the Arbalist surpassed her. There isn't really anything to exciting or special about the Gladiator, but by using the sub-class Ninja's "Bunshin" skill, I was able to create a duplicate in tough battles. Basically, I would have two Gladiators to bring my party up to six members instead of five.

The Monk, of course, is the primary source of instant-healing. Aside from that, the Monk actually absorbs quite a bit of damage and serves as a strong front-line attacker after having put some points into the barehanded skill set. It was also a big plus to not have to buy weapons, so a money savings there.

The Farmer was one of the keystones of this party. Her EXP-increase ability was invaluable throughout the length of the game. Without it, level-ups came at a snail's pace, so there was strong incentive to keep the Farmer around all the time. Apart from the EXP gain, using the Farmer's abilities to harvest large quantities of items gives a huge money boost and ensures that the shop never runs out of key items. (This is the first time I recall the shop ever actually running OUT of things… even more reason to keep the Farmer on board.)

The Arbalist is a strong rear-line attacker, and eventually became my heaviest hitter. One ability gave her the occasional chance to hit twice, and the Armor Piercer skill is pretty deadly. There were a few times when she would hit for upwards of 1000 DMG in a turn, and even the hardiest of bosses can't shrug that off.

The Princess is basically a must-have class in Etrian Odyssey 3, if you ask me. The Royal Veil ability grants healing to all party members at the end of each turn with no MP cost, so unless players don't mind their Monk running out of MP every five minutes and going back and forth to town, I'm pretty sure that everyone playing this game will have at least one Princess onboard. In my party, you'll notice I had *three*… one actual Princess, and two other characters with Princess as a sub-class to increase the amount of life awarded each turn.

It's not the most creative party and I didn't take advantage of some of the more exotic set-ups, but it was rock-solid and got me through the game, so I'm not complaining. I might tweak things if I ever go through it again, but I'm happy with the way it turned out.

Brad, Two Worlds II has been pushed back to early 2011. Like you, I have a soft spot for playing these types of WRPGs. I enjoyed Risen and downloaded the Arcania demo as soon as it was available. I think the limitations you experienced are a by-product of the demo. At least I hope this is the case. A lot of the comments on Gamefaqs regarding the demo have been very negative. Especially in reference to the frame-rate. Personally, I had no issues with the framerate, but I revel in playing subpar games and am used to less-than-perfect graphics. Still,… Read more »

The framerate in Arcania: Gothic 4 was unbearable. It had to be at around 10 fps. I quit and deleted it right away.
The typical WRPG character designs weren’t doing it for me either.

I like Enslaved. They did hold your hands a little too much when platforming, but it was still great. Enslaved may be the surprise hit of the fall. Much better than Heavenly Sword.

I have to pick up EO3 after all of your talk on it.