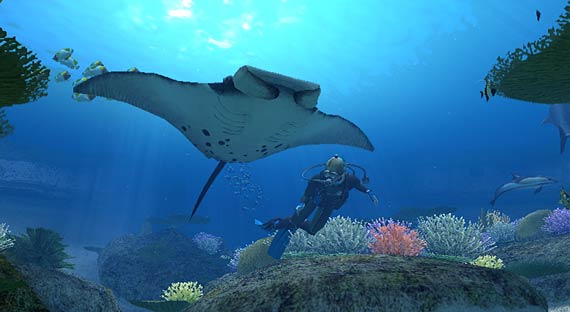 Parents, this game is as ‘E' as E gets. No sex, no language, not even any violence… if there's something about tropical fish that offends you then maybe you'll find something to object to, but otherwise this game is truly suitable for all ages.

Fans of unorthodox experiences should absolutely check it out. Not only is it the best underwater sim game made, it's a real treat to curl up with something where you don't need to worry about life bars, ammunition, aliens, collectible icons, multiplayer cheating, or any of the million other things that seem to come standard in most games. It's nice to just sit back and relax once in a while… a shame that's so rare.

Deaf and Hard of Hearing gamers will have no problems. All dialogue is subtitled, and when exploring underwater, hidden items have a visual cue (it looks like a swarm of rainbow fish swirling) to accompany the telltale ping sound. Total accessibility here.