This weekend is the Emerald City ComiCon, taking place at the Washington State Convention Center this Saturday and Sunday. The convention just keeps getting bigger and better, and this year there are a whole lot of guests and events happening besides the usual avalanche of comics, toys, games, and so on.

Speaking of the ComiCon, supreme nerd rock group Kirby Krackle will be there and giving a free performance on Sunday. I totally love their first album and I just listened to the second (E for Everyone) for the first time tonight, and I'm digging that too. (Review forthcoming, but you can hear the entirety of both albums FOR FREE at the Kirby Krackle website.)

If you're in the Seattle area and like cool things, Emerald City ComiCon is definitely the place to be this weekend. (And if you go, make sure to grab a crepe from La Creperie Voila on the exterior of the building, on the sidewalk directly beside the convention center's front doors. DELICIOUS!)

The Game Developers Conference is going on. I'm not there, but I've been following the news and it seems like it's been a great gathering so far. I'm not even going to attempt to recap the news, but if you're interested in what the movers and shakers are doing, do a quick Google search or click here. 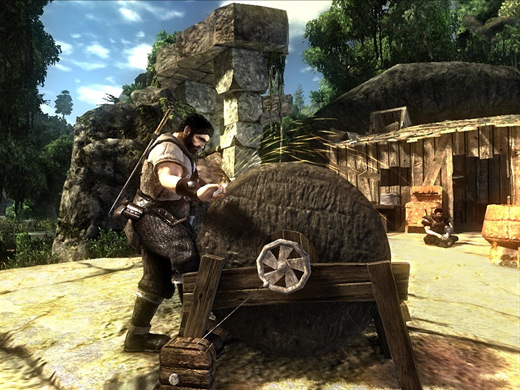 In terms of what I've actually been playing, I've been putting all of my available hours into Risen on the 360.

Prior to receiving a copy, the best I'd heard about it from anyone were fairly middling descriptions, but more often it was referred to in fairly negative terms. Basically, the general consensus was that it was way too hard, didn't bring anything to the table, was eminently skippable, etc. Despite this downward buzz, something about the game still held my attention and I was determined to check it out regardless. I'm really glad that I did.

I'm working on a review now, but as far as I'm concerned, this is a real gamer's game designed for people who enjoy western-style RPGs. It's true that the graphics are fairly crude and the combat system is sketchy at best, but it more than makes up for it with clever writing, extremely solid voice acting, an open world ripe for exploration, and an incredibly massive amount of content for players to dive into. There are tons of really interesting quests to take on and the game presents two different factions for the player to align with. The interesting thing is that they are both good and evil in equal measure, meaning that there is no "right" team to choose. The Bandits believe in personal freedom and liberty, but also extort funds and steal. The White Robes provide care for the sick and order to the wilderness, but also force men to bend to their will and treat people as objects to be managed. I thought long and hard before choosing a side, and the fact that I had to think at all was greatly appreciated.

I don't want to spoil the review I'm cooking up, but what I will say at this point is that I see Risen as a sleeper in the truest sense of the word, and that anyone who truly enjoys freedom and role-playing in games should absolutely take the time to check it out. In fact, if you sweep aside technical concerns and the fact that there's no party to manage, I'd say that Risen is easily on par with something like Dragon Age, both in terms of choice and scope. It surpasses it in many ways, even.

In other games news, I was reading an interview with David Cage (the man behind Heavy Rain) and came across something rather interesting… he stated that during one of the game's "big choices" 80% of people declined to complete the task at hand, with only 20% going ahead with it.

I found this to be totally fascinating because I was in that 20% (as was my wife) and I never in a million years would have guessed that so many people would have chosen the other way. Completely unfathomable, really. I am quite eager to discuss this in detail, but out of respect for those who have not played the game yet, I cannot in good conscience spoil it here at the blog.

I totally agree with you about Risen. I read nothing but negative reviews yet after watching countless gameplay videos was determined to give it a try. Aside from the last-gen technical presentation, the game is superb. Like you say, a gamer’s game. My favorite aspect is how believable the island is. The geometry of the geography all fits together. I was first amazed by this when I discovered a secret staircase in Harbour Town that led to the Don’s manor. Secondly, my wife and I spent our first anniversary last year in Seattle. We stayed in the Hilton near the… Read more »

So, you have PAX and Emerald City ComiCon. That’s it. I am moving to Seattle. Atlanta just has DragonCon. It is fun, but it is a lot more SciFi with a little bit of comics and maayybe a video game booth.