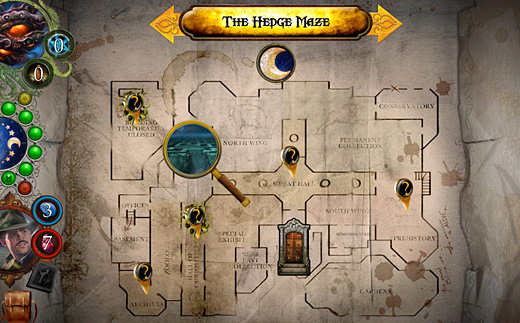 HIGH Having an unbelievable streak of luck and finally sealing Cthulhu away.

LOW Needing just one more glyph and repeatedly being denied.

WTF Getting "+3 Doom" four times in a row for a speedy WTF Game Over.

As a newcomer to the iPhone, I can honestly say that finding a faithful Lovecraft experience in the app store wasn't something I expected. Angry Birds, sure. Words With Friends? Of course. Seeing dread god Cthulhu rise from his watery slumber or meeting Azathoth from beyond the reaches of ordered space? I didn't see that coming on a pocket-sized touchscreen, yet here they are… and they're hungry.

Elder Sign: Omens for iPhone (and iPad) is an electronic version of Fantasy Flight's gothic boardgame of the same name. The player begins by choosing a group of four detectives and venturing into a "museum" where dark deeds are taking place. This museum is the board, and all of the dice rolls, card-drawing and result calculations that would be handled manually are now automated by the AI.  The ultimate goal is to defeat an evil Old One, done by completing "adventures" which appear on the board.

Since Elder Sign is a board game, it should come as no surprise that the way to perform these tasks is to roll virtual dice. Each challenge has a certain required roll for completion, and some are easier than others. A simple challenge will ask the player to get three or four Investigations, represented by magnifying glass symbols on the virtual dice. Tougher challenges often require something like three Perils, a Lore and two Terrors (skulls, scrolls and tentacles, respectively). It's a tall order, and a deathtrap waiting to happen.

While anyone familiar with Lovecraft's work will know that his stories frequently end in madness and disaster, Fantasy Flight has included several roll-altering mechanics which give the player a better shot at success than H.P.'s protagonists ever had. For example, each character in the game has a special ability that can often alter the roll of the dice, and there are several tokens representing clues, spells and actions which can let the player similarly defy chance. It's a smart system of manipulation that takes something random and tilts it with skill. There's still plenty of opportunity for Lady Luck to frown (and oh, she will) but clever use of resources can often change a loss into a win. 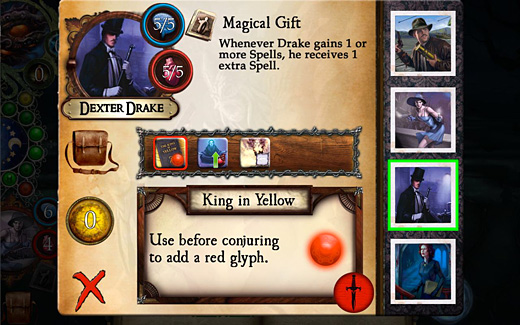 However, banishing unknowable horrors isn't as simple as that. In order to ratchet up the tension and difficulty in accordance with the source material, Elder Sign: Omens also includes several elements which force the player to evaluate risk-versus-reward against a ticking doomsday clock—every fourth turn when "midnight" strikes, the game inches closer to annihilation if the dark ones aren't routed in time. Such an addition was brilliant, not only for the fact that it faithfully represents the same sort of hopelessly foregone conclusions in Lovecraft's stories, but also because it keeps an intense level of pressure on from start to finish.

Not only are he play mechanics spot-on, but I was pleased to find the level of production every bit as good. Elder Sign: Omens is loaded with atmospheric artwork and countless callbacks to the various stories it draws upon. From fedoras and flappers to undersea horrors and fiery pentagrams, the lush visuals are a perfect complement to the polished interface. The icing on the cake? Despite sessions on the smallish screen of the iPhone, it was very easy to play, and I had no issue with the touch controls or how the acreage was used. This title is a great fit for the hardware.

While I was impressed with both the design and production of Elder Sign: Omens, I do have two small criticisms. The first is that like other board- or pen-and-paper games of its ilk, there are many rules and intricacies which are hard to pick up without having a more experienced player on hand to answer questions. To Fantasy Flight's credit, they do include both tutorial videos and text instructions which cover the basics, but finer points like monster generation from the Doom Clock or how Terror effects work only become clear through repeated plays.

My other criticism isn't really a criticism per se, but more a concern over the difficulty.

The core game offers two Old Ones to choose from: Yig (normal) and Azathoth (hard). The most famous of the Lovecraft pantheon, Cthulhu, is available as an in-app purchase. It comes highly recommended since it includes new adventures, new detectives and new mechanics like a two-part campaign, amulet collection, and an investigative pool. That said, I found that it was crushingly difficult. Monsters appeared too frequently, and "finding" important items for the final battle often took far too long. While the add-on is labeled Very Hard, I still felt the balance wasn't quite where it should be. I did finish, but it took close to twenty attempts. With each try clocking in at about an hour or so, that was a lot of time invested.

In any event, after too many late nights and all three Old Ones overcome, I'm very glad that I gave Elder Sign: Omens a shot. Not only is it a great use of classic horror material with top-notch production, it's a superb portable boardgame that doesn't require the effort and schedule coordination needed to gather a group of friends on the weekend. On days when I've got a bit of time and I'm craving something darker than flinging birds from a slingshot or long-distance Scrabble, it's the perfect thing. Rating: 9.0 out of 10.


Disclosures: This game was obtained via paid download and reviewed on the iPhone. Approximately 28 hours of play were devoted to the single-player mode, and the game was completed on all difficulties. The multiplayer mode is of the pass-the-iPhone variety, with no online connection to other players possible.

Parents: This game is not rated by the ESRB, but if it was, I would guess it would probably be rated for Teens. Although there is no questionable language or sexual content, there are some creepy images and the overall tone of the game is quite dark and oppressive. It's also quite complicated to learn, so I doubt any young children would have the patience to play through it anyway. Regardless, think "Teen" with this one.

Deaf & Hard of Hearing: The game is totally accessible. It's essentially a boardgame with certain systems automated, so there is no dialogue and no audio cues necessary. I played the game several times without any sound whatsoever, and never had a problem.