So Ebert issued another statement. I'm not going to bother linking to it since I don't want to give the guy anymore clicks than he's already getting, but basically he quasi-faux-recanted some of his earlier statements, although in essence what he's really saying is not that he's wrong about games never being able to be called art, but that he just shouldn't have said anything.

The way I see it, this isn't a "win" for games or gamers, it's just Ebert getting tired of dealing with the subject and backing away from it while proudly holding on to his self-imposed ignorance. I find it hard to believe that the statement was sincere in any meaningful way, especially since he insists that he has no desire to even try a video game despite having ample access to a console, games, and people willing to walk him through them.

I remain disappointed that someone I previously had so much respect for has taken the position he has. 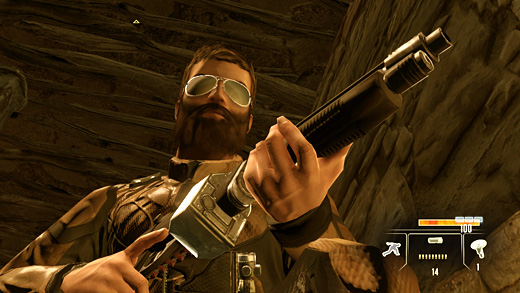 First off, big followup props to @DarthOdium and @ThiefOfHearts for convincing me to stick with the game. Thief made mention of his appreciation for the title several times, and since he is a smart dude who I respect, his comments gave me pause. Darth went one better with his incredibly detailed walkthrough and tips on how to level my character, and his advice was great.

At this point, I've erased my first character and started from scratch, completely re-speccing and changing my play style. I haven't finished the game yet, but I would estimate I'm about halfway. Perhaps a little more.

I'm still considering doing a second opinion review if time allows, but no promises there. In the meantime, my general thought is that the only way to really derive appreciation out of Alpha Protocol is to go Stealth all the way, and put a lot of points into the Pistol ability as well. Level design is still distastefully archaic and there are no end to the problems that occur during gameplay, but once main character Mike Thorton has enough experience under his belt, things almost sort of kind-of come together. At least, it becomes a lot easier to see what Obsidian was shooting for even if they still fell short.

I think the best experience I've had with the game so far took place on a level designed to be a yacht floating in the middle of the ocean. At this particular location, I was finally able to really take advantage of the stealth system and eliminated everyone on the boat without being detected, finding the target and completing my objective in a way that felt both sensible and empowering.

…Of course, the game promptly crapped itself by throwing a logic-defying boss at me immediately afterwards that was both overpowered and running on utterly broken AI.

I'm not going to say that Alpha Protocol is some kind of hidden gem or that my opinion of it has completely changed, but I will say that there are definitely short bursts of cleverness, and it's infinitely entertaining to pop out from behind some cover, activate the Pistol's special ability, and headshot three enemies while time stands still. 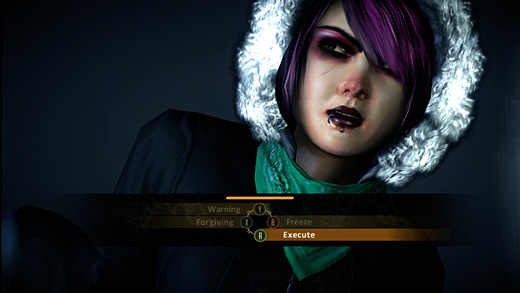 If there was ever a game that deserved to go back to the drawing board and return with a completely revamped sequel, Alpha Protocol would be it.

There's a particular game I'd really like to discuss at the moment, but out of respect for the person who hooked me up with it, I'm going to hold my tongue on specifics until the embargo clears. However, I think it's pretty safe to say that it's a hotly-anticipated sequel that's been getting quite a bit of coverage over the last few months.

As of the time I'm writing this blog, I think I've put around five or six hours into it. Not a lot, but enough to get a good feel for what the game offers—and it's not much. Honestly, I'm shocked. The original hit consoles back in 2007, and in the three years or so since that time, the developers behind the sequel don't seem to have advanced the formula nor really changed all that much. In fact, it might even be seen as a step backwards.

I'm quite surprised to report that the variety and creativity in the sequel are sorely lacking, and it's not like the series had all that much to spare in the first place. Even so, it strikes me as extremely repetitive, shallow, and not even up to the experience offered the first time around.

I haven't finished the game yet, but at this point I'm sort of dreading it. I heard from other critics that there's nothing to look forward to except more repetition, and I'm kind of wondering how the game got to its final state without someone raising their hand and questioning the proceedings.

There's a story behind it (of course) but the bottom line is that it doesn't stack up very favorably to current standards regardless of the reason… I'll cut it some slack, but there's only so much to cut when hour 1 is exactly the same as hour 6, and neither is as enjoyable as the source material.

It’s Crackdown 2, right? Read a review from the only other gaming website I consider reliable, and what they said summed up what your friend said.

I’ve still got the first one in my pile of games ‘to play’, so I’m kind of relieved I won’t feel the need to rush through it if I enjoy it, out of eagerness to play the sequel.

Brad, I can most certainly guess what embargoed game you are referring to, but let me say that: I’ve been putting some of my time into Puzzle Quest 2 (most anticipated game of the year, at least for me) and I can pretty much ctrl+c-ctrl+v your words onto my opinion about it 🙁
OK, my comment is pretty much unrelated but I really did want to express my disdain about PQ2.

Ebert was sorta kinda right, but for all the wrong reasons. Games, like movies, are an art form in but, like movies, only a slight quantity stand out from the rest and qualify as art with a capital A. One could say that it is all in how you define the terms but there is not a definition of the word that allows for movies, paintings, sculptors, music, etc but not games. Of course, I watch movies and play games so that puts me in a position of knowing what I am talking about. Unlike Ebert, who does the former… Read more »

I know you mostly wrote about Alpha Protocol here, but I just have to say:

[quote=Brad Gallaway]The way I see it, this isn’t a “win” for games or gamers, it’s just Ebert getting tired of dealing with the subject and backing away from it while proudly holding on to his self-imposed ignorance.[/quote]

This is the best response I’ve seen to Ebert’s latest. It’s exactly what I’ve been trying to express to my friends when they ask my opinion, only I haven’t been able to sum it up nearly as well. Next time I get asked, I’m quoting you. 🙂