I've been recovering from a pretty nasty cough over the last week or so, so I haven't had a whole lot of time to play games in between the hacking and gagging, but I did manage to do a few things…

For starters, here's a link to the latest Gamecritics Podcast, Episode 81. We talked a little bit about Halloween-themed stuff, we help celebrate Mike's 50th birthday, and we talk a lot about The Walking Dead, Episode 4. Check it out here if you need something to listen to.

Following that, here's my XCOM: Enemy Unknown review. I have to say, I liked the final product a little less than I expected to. It's still a good game and I am very glad that the franchise has made a return, but it feels a little undercooked to me. 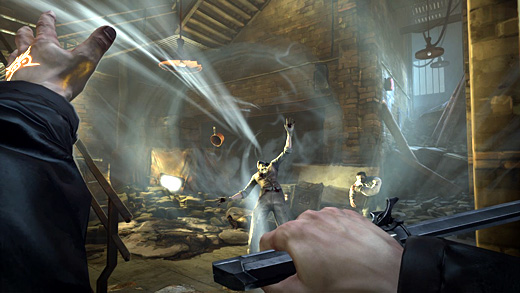 Speaking of games which weren't quite home runs, I have to admit that I'm shocked to say that Dishonored isn't floating my boat. I loved the demo at PAX and it has all of the elements that should appeal to me, but now that I've been sitting down with the full version… it's just not clicking. It's just not coming together. It started well, but it's gone… cold.

It's hard to put my finger on exactly what the problem is, but I think it's that many things are just slightly off, rather than one glaring issue. I'm not very far (just completed the Golden Cat) but I'm having a tough time coming back to it.

One thing that bugs me is that the game is divided up into zones. It really breaks my immersion to have to stop what I'm doing and let the game load a new area. It would be much more elegant to be able to ghost along the rooftops and get a real feel for the city. Along the same lines, I find that it's difficult to keep a clear picture in my head of where I am in relation to where other things are.

Other parts of the game don't sit quite right, either. Although some may disagree, I think a little voice acting for the main character would have helped bring the story together. I also don't get much enjoyment from the stealth—although, to be fair, I'm pretty miserable at being sneaky in this game. I wouldn't have guessed it since I'm usually fairly decent at stealth in other titles, but watching me try to creep around is like a comedy of errors.

I've had several people tell me that I'm probably overthinking the stealth and that it's not as complicated as it appears, yet it's just not happening. Switching between powers feels fiddly. My situational awareness isn't there, and I feel clumsy. The levels feel fairly well-populated, so whenever I think I have a clear shot at someone, there is inevitably someone behind me, or who can see me from down the street or through a window.  At that point, it's re-load a save or start mowing guards down.

Also, I think it was a poor choice to have the starting zones be hostile. Honestly, it gets a little tiresome zipping from roof to roof when what I really want is to be able to walk around and take in each area. I was a little surprised to find that there were no Hitman-esque disguises or something along those lines. Additionally,  the "blink" power is often just a hair short of anywhere I want to go, even after upgrading it to the second level. Constantly being persecuted when trying to get my bearings, learn the game and how it works wasn't the best way to start for me. I think I would have preferred a gentler beginning—at least until more powers unlock and I got into a groove with what the game wants me to do.

I don't mean to say that Dishonored is terrible (because it's not) but I've been troubled over the last two days trying to define exactly why it is that this game which seems custom-made for me is doing absolutely nothing for me… I don't think I've got it completely figured out, but the bottom line is that on some fundamental level,  the two of us aren't getting along.

However, I am kind of ecstatic to report that I do get along with Dokuro—and the fact that it's given me a reason to dust off my Vita makes this little game even sweeter. I've only just started playing it for my next formal review, but I'm in love with it so far. 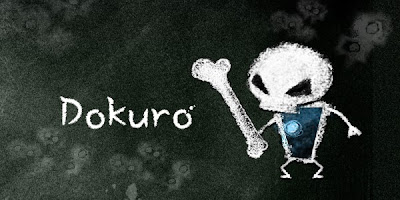 The gist of it is that a demon steals a princess away to be his bride, and a little skeleton minion within his castle takes pity on her, and helps her escape. It's a simple formula, and what it boils down to is that the princess walks from left to right in each level, and it's up to the player (as the skeleton) to help her navigate her way to the exit.

It's not a wildly original formula, but the pleasure of Dokuro is in its details. For starters, the art style is absolutely fantastic… minimal, spare, yet appealing and emotive. It's also smartly designed in terms of how it plays. Although the princess walks a constant pace, she doesn't throw herself off of ledges or walk into lethal obstacles. It's a relief to not have to guard her against doing something stupid during every second gameplay. There's also a brilliant twist in that the skeleton can transform himself into a prince of sorts, and can pick her up as a means of giving the player a more direct way to control her movements and protect her from danger.

Although the difficulty ramps up fairly quickly, each level is quite small and a little trial and error reveals the solution to most problems. It's small, focused, has a great sense of style, and feels like a perfect fit for the Vita. I'm not done with it yet, but so far it's a big win.

Just another quick plug for Lost Girl via iTunes. I'm about halfway through the first season right now, and the show just keeps getting better and better.

If a darker version of Buffy with sharp writing, fluid sexuality, and supernatural crime solving sounds like a thing for you… it's a thing for you. Get on it!

The Transformers Prime line has been a bit of a mess since it launched, but it seems like Hasbro is getting its act together. Hopefully the next wave of toys will be better organized, and less of a headache to come to grips with in terms of locating specific ‘bots, picking through the various versions, and so on.

Here's a quick look at the next big wave coming soon… they're still under the "Prime" moniker, but the focus has clearly shifted towards a "beast hunting" theme.

I love Bioshock and Thief, but am having the hardest time getting into Dishonored. Love the world, the art style, and the writing is pretty good. At first I couldn’t put my finger on it, but I figured out why I have a problem with it. Stealth gameplay is usually fun, but many of the abilities in Dishonored just make you want to run around and destroy everything. When I get that feeling, the fairly slow movement of Corvo just goes against playing like a quick assassin. That is at least how I feel about it. Combined with the lack… Read more »

The AI is atrociously weak and stealth is super over powered.. Also wished you had an inventory and could carry only tranq bolts…..