Driving in the wrong direction 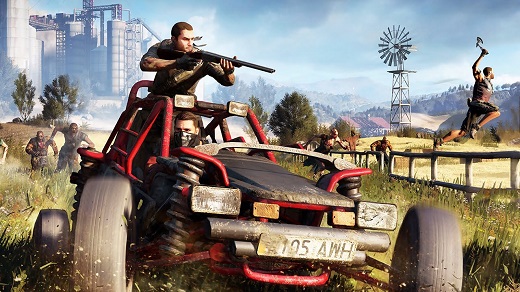 HIGH "What the? This is my power bill!"

LOW Superbosses get their life back if I die, but I don't get my resources back.

WTF I'm collecting all this gasoline and I can't make more molotovs?

It's been a long, long time since the act of traveling distances in a game was entertaining to me. Such freedom was stunning when developers jumped the technological gap and started crafting vast, sprawling areas for exploration. After years of discrete spaces, long corridors and 2D platforms, it was a revelation. That novelty is absolutely gone now, and it's the rare project these days that's enriched by enormous stretches of land to cover.

2015's Dying Light first seemed like another game pushing the same tired big-world idea (plus zombies!) but it stood out by changing how the player interacted with its space. Instead of using vehicles to get from one place to another, it asked people to parkour through its alleys, over its roofs, and under its overpasses.

By adding this new means of travel, getting from Point A to Point B took on new life. Moving became a metagame of picking the best path through a ruined city and executing on the running, jumping and grabbing needed to achieve it. This enhanced locomotion gave relevance and excitement to the square footage players were inhabiting, and it was not only amazing gameplay, but an amazing use of the environment.

Things start promisingly with main character Kyle Crane hearing about a small town where survivors are able to resist the zombie virus, even after being bitten. He follows a map that leads him into this all-new countryside area, and the adventure begins.

In terms of narrative, it's about on-par with the core campaign missions, although one of the things I liked best about Dying Light was that sidequests had unexpectedly humorous elements, and those seem mostly absent here. Basically, players can expect to do errands for the locals, with the ultimate goal of gaining their trust and learning the secret of the zombie cure. It's no great shakes, but it gets the job done.

While the story may be fine, actually playing is not. The Following's hook is that it adds vehicles to the Dying Light formula—a formula which was amazing in large part because it had no vehicles.

Crane gets a dune buggy almost immediately and he's free to drive around the territory, which is apparently twice as big as the main game's map. Unfortunately, the countryside has no fast travel, most of its objectives are separated by huge distances, there's a mountain range in the middle of the map that prevents easy crossing, and the roads are littered with obstacles that make the first-person driving difficult.

It's also quite tough to tell which direction to drive because the mini-map is worthless, and stopping to check the larger map in the menu is an invitation for zombie attack. Also, a buggy can only be spawned at certain locations, so it's common to be separated from Kyle's ride and become stranded a hell of a long way from a vehicle spawn point. Get used to jogging.

As for the car itself, it's a letdown. The buggy is essentially a normal car, but based on the way weapons were so modifiable in the main campaign, I expected the rides to become tricked-out death machines. Sadly, this is just not the case. In reality, there are a number of ‘upgrades' which have negligible effects and the car is in constant need of repair and fuel.  I've driven real off-road vehicles, and I can attest that they don't need servicing every four minutes.

Apart from the auto issues, it's worth noting that The Following is quite difficult. As someone who finished every quest in the main game, I felt ill-equipped for success in the countryside and died often. The weapon drops are low-quality, the zombies hit harder, there's too many of them, and being fatally swarmed is common. Driving in the car doesn't offer safety since zombies are able to leap onto the car to deal damage, and exploding zombies constantly spawn in the car's path. And playing at night? It's even harsher than before. With most of the terrain being flat, there's little way to avoid the nocturnal predator zombies, and I quickly learned to avoid being out after sunset, period.

Technically, The Following needs polish. Although the environments are beautiful and the draw distances are still amazing, I found myself constantly getting hung up and caught on things, especially when using the grappling hook—I frequently fell between objects and got trapped in the geometry, and successfully grappling onto something is still infuriatingly hit-or-miss. Good luck getting the insulator off of the electrical tower without smashing a controller.

This review is already a litany of problems, but I can't wrap without sharing disdain for some of the mission design. In addition to the standard fetchquests, The Following adds giant super-zombies which are penned in hyper-gamey arenas, and they're hard as hell to kill. There's no real strategy to them, just tough it out and hope to survive. When they'd best me, I'd come back to see they regained all their health, but my weapons were still degraded from use and my ammo and health packs were still spent. Don't even get me started on the ‘clear out the hive' missions, and constantly driving across the landscape just to turn in a quest is a waste of time. This is not good content; it feels like something made intentionally painful to placate the hardcore contingent who constantly clamor for tougher and tougher challenges.

I desperately wanted more Dying Light after choosing it as one of the year's best in 2015, but now that I've gotten it, I'm bitterly disappointed that the new content fails to build on its strengths. By shifting focus away from what it does best, The Following is a mediocre, frustrating, open-world experience that's nowhere as good as what inspired it. Rating: 4 out of 10

Deaf & Hard of Hearing: All dialogue has subtitles, but environmental sound definitely plays a role. There's often a lot happening on-screen, so hearing zombies is a cue that D/HH players miss out on when things are hectic. Also, there's one quest which requires the player to listen for beeping. There's no visual cue for this, so it's almost impossible to complete without being able to hear the sound.

Remappable Controls: This game's controls are not completely remappable, although there are two presets and it's possible to invert the Y-axis, change the stick sensitivity and the deadzone, and enable auto-aim. Heads up, the controls overall are a bit more complicated than the usual—the shoulder buttons are used for attacking and jumping, and the D-Pad is used for switching items during play.

Hey Tom! yeah, I enjoyed SO’s traversal for sure. had some probs with the game but I enjoyed it overall. A fun way to get around. As for ME, i liked that too, but again, had some larger issues with the game overall. That said,i think DL tops ME since ME was so scripted and linear… I like how DL let you go pretty much anywhere, and that freedom is great. OTOH, i tried the demo for the new ME which is now open world and TBH it felt like a miss to me… hoping the full game is better,… Read more »

Maybe Traversal could be a topic on an upcoming podcast ? I think you mentioned this before Brad, but didn’t you enjoy Sunset Overdrive’s traversal ? For me it’s themepark like movement system above ground, was one of the best traversal systems Ive played. Dying Light had a satisfying base level interaction to movement around its environment, where it showed that physical engagement to manoeuvring past obstacles and its environment is generally satisfying, and makes you wish more first person games had that system. But its still less impressive to me then what Mirrors Edge did. Even if Mirrors Edge… Read more »

Thanks for replying Brad. No need to reply with next comment if you don’t want to. Too long a post. Just some further thoughts on traversal: It seems a very important system to games that have enough of it, but it can’t really USUALLY be the dominant aspect to most games ( obvious, I know, but more then one would suspect ) because of it’s lack of complexity, progression or development, like we see in characters, story or deeper gameplay systems like combat. Traversal can’t hold attention for long enough because other aspects or systems are more crucial or engaging.… Read more »

I’m a huge dying light fan boy, I’ve replayed the main game several times now, including after the enhanced edition changes. I’ve also gone through the following immediately after playing the main game so I have a fresh basis for comparison and not skewed by nostalgia. In any case, I agree with most issues you’ve highlighted. I find the buggy and huge map mechanics take away from what made Dying Light so fun. I was often stranded and indeed spent hours (combined) running. Thankfully I discovered a usable item called “the button” which teleports you but it’s a random location… Read more »