These Girls Have Personality 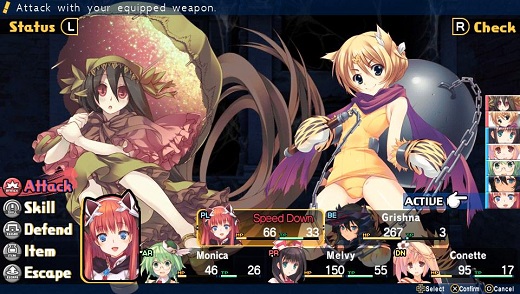 LOW Losing four levels' worth of EXP after an emergency re-spec.

WTF Monica's head doesn't look like it belongs on her Assassin body.

I love it when a game surprises me.

I'd known about Dungeon Travelers 2 for a while, but to be perfectly blunt, it looked like it was going to be a cash-in sold on the scantily-clad anime girls in every screenshot. I mean, I knew that it was ostensibly a dungeon crawler, but between the copious amounts of T&A dominating pre-release info and the fact that Etrian Odyssey series has had the ‘crawl niche on lockdown for a while, I didn't think it could be a serious contender.

In this particular case, I am happy to be wrong on all counts. Not only is Dungeon Travelers 2 every bit as good as the Etrian series, it's a fantastic title in its own right, and easily strong enough to carve out a place at the top of its class. I have eaten the crow, and it is delicious.

Structurally, it is indeed a first-person dungeon crawler. The player's character is a Libra; basically a team manager who wields a magic book and gives orders to the squad of predefined characters he meets. He'll eventually assemble a team of five combat ladies from the large cast available, and get to work solving the problems of the world. In dungeons.

In terms of narrative, the overall story isn't all that interesting, but the characters are likable and the dialogue is engaging. There were many instances of grin-inducing self-awareness, good doses of sarcasm, and even some wink-wink questioning of the tropes that pop up in games of this sort. The amount of chatter is just right, too. Of course there's a good chunk between major episodes of gameplay, but characters often pause in the middle of a dungeon to share unexpected info or comments. It's all quite lively.

The gameplay? Just as pleasant as the dialogue. Once inside a level, everything initially seems like a run-of-the-mill dungeon crawl—it's turn-based, rooms and hallways are explored in first-person perspective, there are lots of menus… it comes off as boilerplate. But, appearances are deceiving. Over time, I came to appreciate the many twists and tweaks that make Dungeon Travelers 2 stand out mechanically.

For example, the game takes a neat approach to magic use—interrupting enemy spells and preventing enemies from interrupting mine is a big part of play.

Spells in this game are extremely deadly, and being on the receiving end leads to rapid party wipes. Whenever an enemy started casting, I found myself going into panic mode and trying to stop them with high damage or a critical hit, ignoring all else. The high stakes attached to this part of combat lent it an intense quality that I quite enjoyed.

Another interesting twist in Dungeon Travelers 2 is that the game eschews the usual tight reins on magic and health, and instead gives the player different avenues to make sure that the party remains topped-up with HP and MP at all times. Certain pieces of armor auto-regenerate points, certain characters gain similar abilities later on, and one particular class, the Maid, has a slew of zero-cost spells that maintain party strength. It's a joy to be freed from constantly agonizing over life potions.

Dungeon Travelers 2 also offers other innovations, such as making each creature killed count towards resources that can be made into magic charms or used to buff certain weapons. It's a small thing (but significant!) that these resources are based solely on number of enemies defeated, and not on getting drops from them.

Dungeon crawling has been stagnant in recent years with few exceptions, but Dungeon Travelers 2 makes clear and clever changes to the base formula, and innovates in ways that keep it from becoming an overfamiliar grind. However, while the gameplay is generally great, the difficulty of the bosses is another story.

It's not that the big bads at the end of each level are broken or cheap, but given the number of characters, classes and skills that a party can potentially have, it's easy to build a team that lacks the abilities needed to triumph. If this happens, a challenging boss fight becomes a progress-killing brick wall. The devs have added a limited re-spec function which gives players an escape hatch if they're stymied, but it's problematic to use and isn't as player-friendly as I would have liked.

Now, about those anime girls. There's absolutely no question that this game is stuffed to the brim with T&A. Every character the player recruits is a cute girl in various degrees of dress, and almost all of the enemies are too, except for a few instances where they're… fruit. Like, literal fruit—apples, bananas, and so on. I don't quite understand this girl/fruit dichotomy and what it might mean, but hey.

In any event, the aesthetic is what it is, and people who are allergic to skin-heavy content might have a hard time getting past it to enjoy the game underneath. And honestly, that's all right. I've always said that not every game is right for every person, so bouncing off of Dungeon Travelers 2 for that reason alone would be totally understandable. However, I have nothing against this content, the artwork is nicely done, and the gameplay underneath is win.

In some ways, Dungeon Travelers 2 feels like a bit of a throwback. Trying to grind out enough EXP to get that next level, or getting smacked down by the stiff bosses has that ‘classic' dungeon crawl feel. On the other hand, the changes in formula were all smart moves, and there's nothing embarrassing about indulging in this extremely likable cast of characters, regardless of how much clothing they have on. I really didn't expect much from this game, but it overdelivered in spades. Rating: 8.5 out of 10


Disclosures: This game was obtained via publisher and reviewed on the Vita. Approximately 35 hours of play were devoted to the single-player mode, and the game was not completed. (Still playing.) There are no multiplayer modes.

Parents: According to the ESRB, this game contains: fantasy violence, language, mild blood, partial nudity, and sexual themes. In my view, the only thing to really be concerned about here are the copious amounts of sexy anime girls—the game is chock FULL of them. Some are less-clothed than others, but we're generally talking maximum boobage here. Plenty of, uh, other shots as well. Otherwise, it follows standard JRPG/dungeon crawl lines that aren't worthy of any special warnings.

Deaf & Hard of Hearing: No problems here. The game is turn based, and all dialogue comes via text. It's fully accessible.

One of the only review sites that honestly talks about the actual game and not get hung up on the fanservice. I feel like it should be mandatory that every reviewer list ingame play hours.

Good review,this was a of the few review where the writer clearly look like played the game more what a few hours.

Thank you very much for the super informative review. Despite being a huge fan of Sting!’s work for a long time, I was really on the fence about his game due to what I perceived as some pretty cheap production values. Because you took the time to really describe the title’s unique mechanics, DT2 now has a spot on my wishlist. It’s good to hear that Sting! Is continuing their MO of experimental gameplay ideas, even within such a traditionally conservative genre. I also want to thank you for your measured approach in this piece. I’ve been battening down the… Read more »