It's called Drag-On Dragoon in Japan… 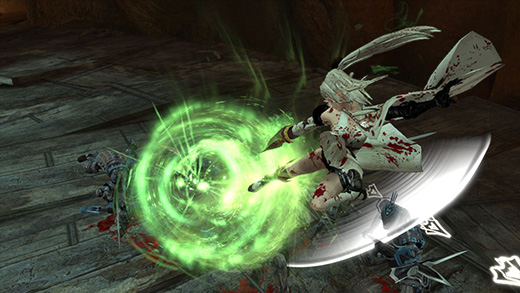 HIGH The Nier team made this!

WTF The dragon is nearly invulnerable and flies, so why is the main character on foot so much?

Before I started Drakengard 3

, a good friend who'd already reviewed it cautioned me that it was "not Nier," and he was entirely correct. In fact, that warning is probably going to end up being the understatement of the year.

To be fair, it's not that I expected the same world or mechanics, but Nier is a special thing, and an important work that should be played by anyone who cares about gaming in a critical sense. Hearing that the team behind it created Drakengard 3 gave me hope that it would be worthwhile, if not something that would challenge me in some way, or make me think.

The only part of me that Drakengard 3 challenged was my patience.

As much as it pains me to say it, it's one of the worst games I've played this year. No amount of mental gymnastics or artistic leeway could give me the strength to power through it (much less appreciate it) and I'm having a tough time believing that such a massive step down in quality between works actually happened.

So, where to start? There's just so much to choose from…

Looking at the story, it's a largely incomprehensible mess that swings wildly between comedy, drama, and absurdity. The characters are incredibly unlikable, with nearly all of them spewing an unnecessary amount of profanity and vulgar sexual comments that don't further the story or have any logical context. It feels like someone was intentionally trying to craft the most offensive dialogue possible, and they succeeded.

The gameplay is just as bad as the storytelling. Each level is a poor-man's Dynasty Warriors filled with waves of cookie-cutter enemies and wooden crates filled with items. The combat is simplistic, incredibly repetitive, and made even worse by the game's abundance of technical problems.

For instance, the camera frequently gets hung up whenever the player gets near walls, and when near said walls, it's entirely too easy to get corner-trapped by mobs of enemies and be unable to get back up or to escape. The graphics are ugly and muddy, and the framerate frequently slows down to an absolute crawl.

At this point in the PlayStation 3s life cycle, games should be coming out more polished and accomplished than ever. Yet Drakengard 3 looks and runs like someone jammed a PS2 disc into a PS3 and forced it to run, inflicting catastrophic damage on the hardware in the process.

Ironically, from what I gather, Drakengard 3 must be replayed multiple times in order to get the "real" ending, and that's just a thing that's not ever going to happen. This game is so bad on all fronts that I simply could not force myself to finish even once.

After suffering with it and finding every aspect to be distasteful, I'm slotting it as an early contender for 2014's Most Disappointing. I have no idea how something this bad came from team capable of creating something so good, but the magnitude with which Drakengard 3


Disclosures: This game was obtained via publisher and reviewed on the PS3. Approximately 7.5 hours of play were devoted to the single-player mode, and the game was not completed. There are no multiplayer modes.

Parents: According to the ESRB, this game contains: blood and gore, intense violence, partial nudity, sexual themes, and strong language. This one is absolutely not for the kids thanks to extreme amounts of profanity and explicit language, not to mention the blood and some over-the-top cut-scenes. (With literal cutting.) Everything here goes to 11, so be warned.

Deaf & Hard of Hearing: All dialogue is subtitled, but be aware that the characters frequently have long conversations while the action is happening during a level, and it's nearly impossible to play and read them at the same time. Prepare to miss out on huge chunks of exposition. Otherwise, there are no audio cues necessary for play.