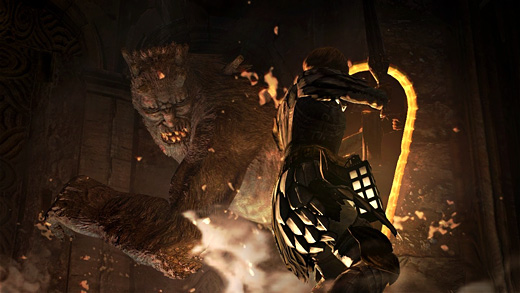 HIGH The final battle with the Dragon.

WTF Who keeps leaving explosive barrels all over the kingdom?

, the new open-world role-playing (RPG) from Capcom, strikes me as nothing so much as a dry turkey sandwich—the bread is masterfully baked, the tomato's ripe and the meat is mouth-wateringly moist, but without the mayo to bring all the elements together, it's not the delicious whole it should be. It's still tasty and certainly worth eating, but after the meal is over, it's hard not to think about how much better it could have been…

Of course, rather than roasted bird slices and hearty wheat, players jumping into the world of Gransys will find a Western-style third-person adventure that takes elements from many other titles and blends them together into something that's reminiscent of (but not quite like) the best of them. Unfortunately, it also makes some errors and strange decisions that the competition avoids, and these issues hold it back.

On a macro scale I enjoyed the game greatly, and found it very hard to put down. Exploring Dogma's engrossing, detailed world of mysterious dungeons, wind-swept castles and dark forests was as rich as I'd hoped it would be, and going toe-to-toe with the massive monsters roaming the land is the definition of "epic." Although it clings closely to traditional Dungeons & Dragons-style fantasy elements (no steampunk or post-apocalypse here) I found that a great deal of care was taken in bringing the world to life, and it pays off.

However, while Dragon's Dogma seems to play it safe at first glance, that doesn't mean that risks aren't taken. In fact, it diverges from the pack in two significant ways: real-time combat, and the Pawn system of AI companions.

Although more and more RPGs are attempting to integrate real-time combat, few developers are steeped in the field the way that Capcom is—Devil May Cry, Monster Hunter, Resident Evil 4, and Street Fighter, for instance. By drawing on decades of experience with action and marrying it to a role-playing template, Dragon's Dogma delivers exciting battles that are based on skill just as much as they are on points and stats. Taking an elevated position and holding my bow's aim steady on the eye of a towering cyclops never stopped thrilling me, and even the smallest skirmish is leagues better than the mindless hack-and-slash the genre usually offers. Equally successful is the Pawn system, which is genuinely unlike anything else in RPGs today. 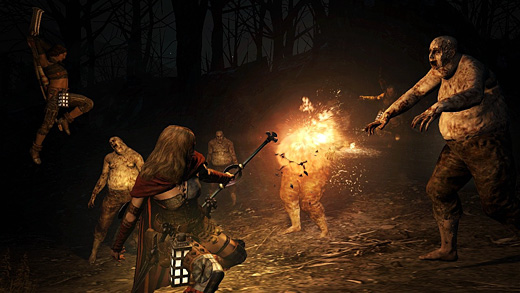 After creating their own character, the player is asked to create a "Pawn"—essentially, a faithful companion that will stay by their side over the course of the adventure. Having an AI helper isn't anything new, but the twist is that after creating this character, other players around the world are free to "hire" a copy of it to join their own party.

After getting the gist of how it worked, I found it incredibly addicting to work towards improving my Pawn and making her attractive to other players by increasing her abilities, equipping her with the best gear, and upping her stats. The rewards of doing such are just as unique as this "loaner" system—Pawns collect both information and experience when they travel with others, further enhancing their competence and worth.

In one memorable example, my Pawn completed a quest with someone else before I got to it myself. When I finally neared the climax, she gave me advice for an action that I wasn't even aware existed—it learned of this action by witnessing it elsewhere. Without that exposure to other players, my pawn would have been just as unaware of the options as I was. Such educational benefits also extend to improved tactics against monsters they've fought and the ability to lead the player to destinations they've already seen.

—Oh, and did I mention that Pawns are ranked for popularity worldwide? Checking whether one has risen or fallen in the rankings should carry an addiction warning. This is truly innovative stuff and a fantastically nonstandard interpretation of what "multiplayer" can mean, similar in brilliance to the new ground Demon's Souls forged.

After being treated to these invigorating steps forward, it was then quite disappointing to see that Dragon's Dogma stumbles over itself in some very strange, very obvious ways.

The biggest issue for me, and a deadly serious one, is that the developers are absurdly stingy with fast-travel. In interviews, they said that this was meant to emphasize the idea of perilously journeying through the landscape. Ostensibly, players will discover things along the way, explore the significant differences between day and night, and have random encounters with fearsome creatures before arriving at their destination.  This is all fine in theory, but the problem is that there's no value in crossing the same well-traveled strip of land a dozen times over, and it's even worse when the player reaches a level at which wandering monsters no longer pose a threat. 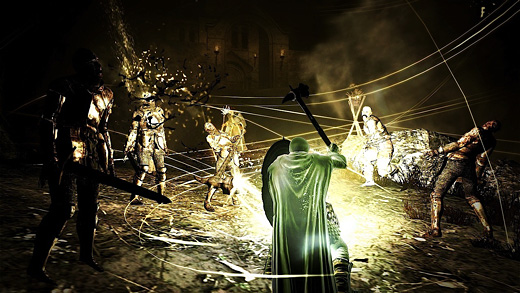 Don't get me wrong—walking through a dark grove of trees or up a craggy mountainside with no idea of what's ahead (or lurking behind) is thoroughly engrossing stuff, but once the territory has been combed over, it's grossly disrespectful of a player's time to ask them to repeatedly shuttle back and forth. It was so irritating, in fact, that there were several instances when I turned the game off out of frustration when faced with another continent-spanning trek to a place I'd already been.

There are a wealth of other, smaller issues like ungainly menus, the lack of a true quicksave, problems discerning quest difficulty, quests mysteriously auto-canceling, inconsistent markers on both maps and quest givers, a lack of use for the character affinity and combining systems, and so on. Rough edges? This game's got 'em.

In truth, I could compile quite a list of places where the game goes wrongish, but the other major thing that keeps the Dogma sandwich dry is that it straddles an uncomfortable middle ground between being story-directed and self-directed. Either approach is potentially valid in my eyes, but by waffling back and forth between both, it ends up satisfying neither.

As Dogma's tale attempts to unfold, there is no cohesion in the plot. The dramatic arc that should be present never materializes. I didn't form attachments with any of the characters, and some of the events didn't make sense. For example, I was thrown into prison by the Duke ruling the land. I escaped from my cell, but the guard didn't seem to care. Worse, the Duke didn't bat an eye when I walked back into his court and took the next mission. Although it gains momentum and finishes with bold-as-brass events that few players will see coming, it's clear that Capcom is out of their depth when trying to craft the sort of tale that's struggling to be told here. Perhaps a structure less story-centric would have been in order.

For all the problems it has, I'd be lying if I said that the game wasn't spectacular when all of the elements do manage to come together. Setting off into uncharted territory with my faithful Pawn and being waylaid by a massive Golem or spellcasting Chimera never failed to get my pulse pounding, and there were many times when I was content to simply take in the view, enjoying the feeling of being transported to a different land full of possibilities. There is an undeniable power to Dogma's scaly vision, easily discernible despite the haze.

That said, if some people try Dragon's Dogma

and walk away disappointed, I wouldn't blame them. I certainly shared that sentiment more times that I liked. However, when not scratching my head over the wheezy story or gritting my teeth as I retraced my steps from the central castle to the local encampment for the thousandth time, Dragon's Dogma came alive with grand-scale role-playing that I won't soon forget. In between the missteps and oddness, there is an awful lot of awesome on display, and that's a hard sandwich to resist, condiments or not. Rating: 7.5 out of 10.


Disclosures: This game was obtained via publisher and reviewed on the Xbox 360. Approximately 38 hours of play were devoted to the single-player mode, and the game was completed. There are no multiplayer modes.

Parents: According to the ESRB, this game contains blood and gore, partial nudity, suggestive themes, and violence. Although I don't think there's much here that parents should be overly cautious of, there's no doubt that the game is aimed at older players. Its tone is serious, and the level of graphic violence is fairly high—goblins die in splashes of blood, cyclopes sustain visible injuries, and so on. While I might not let my son play it on his own, I had little qualms about letting him watch snatches here and there. That said, it's probably best left to older players.

Deaf & Hard of Hearing: You should be aware that all dialogue is subtitled, so the story is easy to follow. On the other hand, sound cues sometimes play a key role in being aware of enemies nearby before they're visible. Certain attacks are also telegraphed by specific sound cues during larger battles. It's not a huge factor during gameplay, but it does provide an edge that may make things a bit harder for players who have auditory issues.

As Dogma’s tale attempts to unfold, there is no cohesion in the plot. The dramatic arc that should be present never materializes. I didn’t form attachments with any of the characters, and some of the events didn’t make sense. For example, I was thrown into prison by the Duke ruling the land. I escaped from my cell, but the guard didn’t seem to care. Worse, the Duke didn’t bat an eye when I walked back into his court and took the next mission. So true, for me the most aggravating example of this was a scene in which suddenly a… Read more »

I haven’t got past the first village yet, but the first character I created was remarkably similar to the chap on the right of your second screenshot. I couldn’t persevere with her, but it’s worth pointing out that the character creation options are pretty deep.