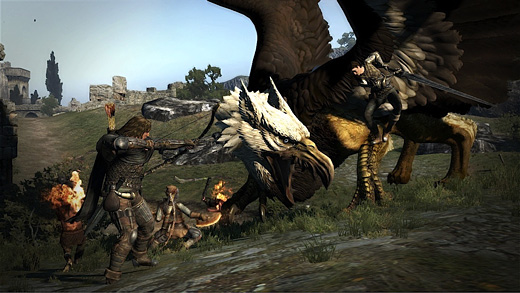 The Dragon's Dogma demo is now out for both XBL and PSN, apparently. I haven't had a chance to play it yet, but from what people have been telling me, it sounds extremely similar to the demo they had running at last year's PAX.

Given that we currently have a huge, yawning gap where a new Monster Hunter should go, it seems as though Capcom is intending Dragon's Dogma to sort of (maybe? kinda?) fill it. I have no idea how successful that will be, but I am wondering how the PR teams behind it are intending to sell it… apparently some people are expecting it to be the next Skyrim, some (like me) are expecting a Westernized Monster Hunter hybrid, and a whole lot of people don't know what to expect. There have also been some major quality concerns raised, though who knows how that will play out in the final version.

Given that the game is due to hit stores fairly soon, it's a little alarming that there are still so many major question marks surrounding it…  I am definitely hoping for the best, though.

Oh, what have I been playing? Not much… game time has been in short supply lately, but I have two Extreme tracks left to finish in Trials Evo, and I've been inspired to go back and try to complete the final Extreme that I never polished off in Trials HD. (and boy, did I come this close to doing it today…) Props to @FatShadyLive for all his tips and words of encouragement!

Besides that, the wife and I were craving some two-player, so I dug Skylanders out again and we started a new quest. My oldest son and I almost beat it when he was here for spring break, but we didn't quite get the job done.

In the interim, I picked up some new characters thanks to a mercy shipment from @llandamaar in the UK (yes, I can confirm that overseas Skylanders DO work here) so it's almost like playing a new game thanks to these new additions. Stump Smash, I CHOOSE YOU!

I was only half-listening when my significant other was playing through it, but I heard more than enough to convince me to pony up $5 and check it out for myself a little bit later…