Technically, a Return. Effectively, More like a Quick Pit Stop 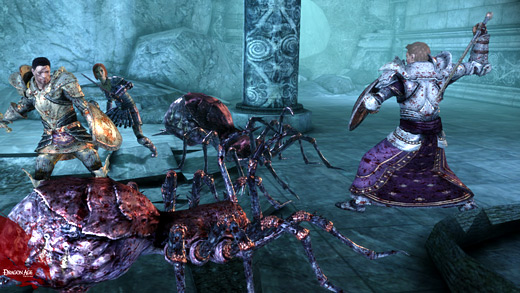 HIGH The new armor and weaponry is pretty good stuff.

LOW It's about an hour long, total.

WTF Where are all the dialogue options?

The latest downloadable add-on to BioWare's smash hit Dragon Age: Origins was released on January 13 for the Xbox 360 at a price of 400 Microsoft points. ($5.00) Titled Return to Ostagar, this side quest includes several pieces of new armor and weapons, along with one new Achievement.

Judging DLC for a game that's as story-heavy as Dragon Age is a little difficult. In Return to Ostagar, the player's party gets a chance to return to the site of the fateful battle where two important characters were killed, and where the events of the adventure itself were set into motion. It's a key location, heavy with significance. However, having played the game upon its release, coming back to this mission now so long after the fact feels a little odd. Not to spoil anything for anyone, but I suspect this mission would've been a much better fit if it had been available before completing the main storyline.

Issues of timing aside, I have to admit that I expected a little bit more out of Ostagar. Although the new armor and weapons are good, I can't imagine that I'll get much use out of them at this point. Instead, I would have rather had more story and dialogue than new gear—after all, the intellectual, emotional side is Dragon Age's greatest strength. The DLC comes up surprisingly short in this aspect.

Despite returning to the battlefield with two party members who were survivors, there's very little discussion of what transpired. Even worse, completing the final act of the mission seems the perfect time to have some deep character-building happening, yet only a line or two pass before the Achievement pops and it's time to return to the world map. This gaping void in particular felt like a glaring omission, especially for a game that previously went to such great lengths to create rich and involved dialogue.

As much as I enjoy Dragon Age, I can't help but feel that this add-on could have been more. For $5.00, I got a few lines of dialogue, new weapons and armor, and about an hour's worth of straightforward monster-killing. It's not a terrible bargain and certainly not the outright robbery that some DLC can be at times, but Return to Ostagar can't compare with the quality of The Stone Prisoner or Warden's Keep DLC missions. Of course, the price point of Ostagar is lower than either of those and I'm glad for that, but then again, I guess you do get what you pay for… Rating: 5.0 out of 10.

Disclosures: This game was obtained via paid download and reviewed on the Xbox 360. Approximately 45 minutes of play were devoted to the single-player mode, and the content was completed.

Parents: According to the ESRB, this game contains blood, intense violence, language, partial nudity, and sexual content. Parents, take heed… see all these warning descriptors? They're definitely here for a reason. No kids allowed.

Deaf & Hard of Hearing: You won't have any issues. There's not much voicework here, and what's present is fully subtitled. There are no significant audio cues during gameplay—it's fully accessible.

DLC is harming games…FO3 was rushed and poo’d out for the sake of it and as good as Dragon age its missing alot of stuff to rush it out so they can start selling DLC.

Look at enchantment and runes totally under developed,tactics is still buggy and talents is unbalanced….spells need an overhaul….