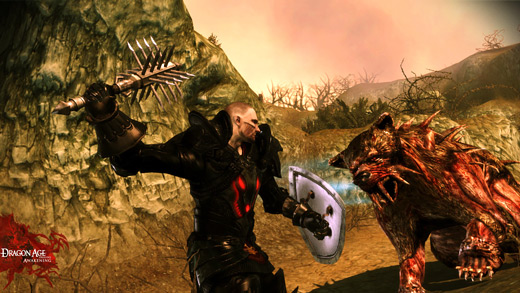 I finally got around to playing (and finishing) Dragon Age: Origins — Awakening this week, and it was an interesting experience.

I'm going to be talking about only this subject for the rest of the blog, in what most people would probably describe as rambling haphazardly in geektastic fashion. If this doesn't sound like a good way to spend three minutes, skip reading today's post and come back next time for my rundown of the Sony PS3 Move event. You've been warned.

(Also, I will be responding to some of the DLC comments later, I just need more time to digest them.)

To start with, it was a pretty chunky amount of content for something called an "expansion". It may sound odd, but after going through it I kind of felt as though it might have worked better if it had been split up into its three main component parts and doled out one at a time, similar to the way Fallout 3 handled its five add-ons.

The main reason I say this is that as an expansion, it did not include the same amount of character-building and dialogue content found in the main game. If you ask me, those things are what made the original DA experience what it was, and playing a title which is technically the same (but with less dialogue) only served to highlight how poor the gameplay actually is.

Combat is still a fairly jumbled mess and level designs remain quite boring. Many of the quests are on the insipid side, and without having the same level of dedication to my party, I found myself simply skipping some of the more pointless quests to keep the story progressing at a faster pace.

This is just a theory, but I imagine if Awakening had been separated into thirds, going through it might've been more tolerable since there would be less to go through at a time. After all, it's easy to put up with stuff that isn't stellar if it only takes an hour or two. Getting through ten or fifteen hours of not-stellar is a little tougher. 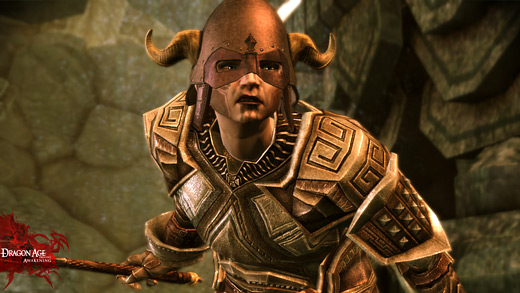 Another reason I think separating it might have been a good idea is that I found the experience to be fairly buggy, and having to only focus on one portion at a time may have been a benefit to quality control. As a sometimes-completionist, it was quite irritating to see that some quests didn't clear from my active queue after finishing. At first I thought it meant there was still something left to do, but no, they were just bugged. Other quests simply wouldn't trigger. For example, in Amaranthine, I was supposed to steal booze from a gang, yet the gang never appeared.

Along similar lines, I found the implementation of the companion-specific quests to need a little more work as well. I couldn't get Sigrun's to activate (another bug, well-noted by the GameFAQs community) and the same went for the second part of Oghren's. Also, due to the way the game is structured, it appears as though whichever party member is collected last will not be able to undertake the Joining ceremony, nor their specific quest, apparently. When the proper character is spoken to in order to initiate it, it instead leads to the final battle. (If I'm wrong on that, please let me know.)

These issues were quite surprising given that interacting with the companions are generally the high points of any BioWare game, and they left me with a generally unsatisfied feeling.

I don't want to sound like Awakening was all bad, though, because it wasn't. Despite the characters not having as much dialogue or depth as the main game, I did enjoy them. Once again, BioWare shows it has the most consistently well-done characters in the industry thanks to interesting party members like the acerbic, wisecracking Anders, or the undead Justice. The handling of Nathaniel Howe was another high point, and I certainly enjoyed seeing the way his character related to previous events.

The engaging characters were par for the course, but one thing I didn't expect was how similar Awakening was to Mass Effect 2 in terms of structure. In both games the player is tasked with collecting upgrades to fortify something. In Mass Effect 2 it's the Normandy spacecraft. In Awakening, it's the Vigil Keep. Both titles have late-game ramifications based on how much effort the player put in. Besides that, both games wait until the end phase to really kick their main plots into high gear. After what felt like three generally disconnected quests in Awakening, everything started to mesh and make sense in the final two or three hours. There were a few fairly agonizing choices, and the level of drama finally took a sharp upswing before credits rolled. This paralleled my experience with Mass Effect 2's teammate-fetchquesting exactly, just on a smaller scale. 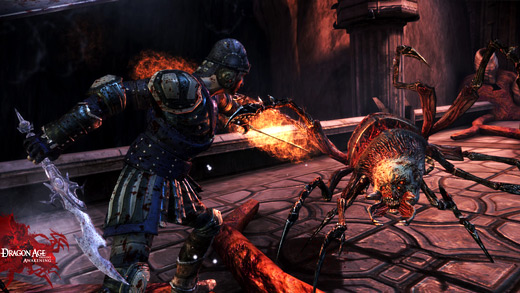 Another unexpected aspect that I appreciated about Awakening was that it gave me a second chance to experiment with a new character build without having to re-play the core 50-hour quest. In my Origins run, I chose to be a sword/shield user and became quite comfortable with being the primary damage dealer in every encounter. After discovering that BioWare did not take into account the fact that a player's Warden can sacrifice themselves at the end of the adventure, I chose to start a brand-new character rather than compromise the storyline continuity I had created.

(And by the way, WHAT THE HELL was up with NOT taking that ending into account? It should have absolutely been possible to import the choices I made in the game INCLUDING the fact that my Warden made the ultimate sacrifice at the end. Resurrecting her with a quick handwave? No bloody thanks, and way to disregard the way I played the game.)

Deciding to take a different route, I created a mage to see how the other half lived. After setting one up and taking my best guess at how a mage should be built, it was quite a shock to have to completely re-vamp my battlefield strategies and play the game in a totally different fashion. I was vaguely hating life for the first few hours until I found the right selection of spells that suited my preferences, after which things started to click. I can't say that I never stopped feeling naked without heavy armor and shield, but the mass-damage lightning spells and sniping-distance energy bolts helped to compensate. I don't know that I would stick with a mage for Dragon Age 2: Excessive Subtitle Here, but I might consider it and that's not something I would've said prior to Awakening.

After all was said and done, I'm not quite sure that the experience was worth it. Like I said, I enjoyed the chance to go through new content with a different kind of avatar and I was definitely a fan of some of the new teammates, but it all felt a little long and a little flat until the very end… I guess it just goes to show that developers should play to their strengths, and in BioWare's case, their strengths are their writing and their characters. Take some of that away, and the end product doesn't quite make as much sense as their other efforts.

I don’t know if I would’ve been happy with the game being sliced into sections, as you say, but I think most of us are in agreement that having returning party members probably would have benefited a lot more than having new ones in Awakening (20 hours just isn’t enough time to know or care for new people). In fact, I get the feeling most people wanted a lot of aspects from Origins carried over into Awakening (choices you made, the cultural impact, party members who may have left you or died, etc… ) but Awakenings does seem to have… Read more »

The reason that you could play as your Warden from the main game (regardless of whether you sacrificed yourself or not) was because people clamored for it on the BioWare forums so they obliged. I believe that was not the original intent for Awakening but I am not 100% sure on this.