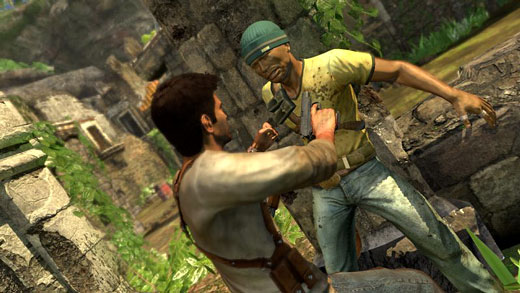 I finished Uncharted: Drake's Fortune last night, and although I took copious notes and intended to dress it down in a formal review, after a good night's sleep, I realized I just don't care enough to make the effort.

Overall, it was a shallow, trite game that brings absolutely nothing new to the table. Even worse, it swipes wholesale from other sources. The thin exploration and puzzle elements are reminiscent of Tomb Raider, although nowhere near the same level of intricacy or design. The gunplay feels a bit like a Gears of War lite, and there's far, far, far too much of it. The story and setting crib from Indiana Jones (or perhaps The Librarian instead), yet the generic white-guy main character doesn't have a tenth of Indy's charisma, not to mention the half-baked plot never comes together.

Honestly, I don't even understand what Naughty Dog was going for here. There's no "hook" or unique identity to the game. Make a few easy jumps, kill a million mercenaries, and travel from scene to scene with very little drama or suspense. Graphically it's fairly strong, but it fails to deliver in every other category… sort of like a videogame equivalent to being a Jack-of-All-Trades. It tries a few different things, but doesn't do any of them particularly well. 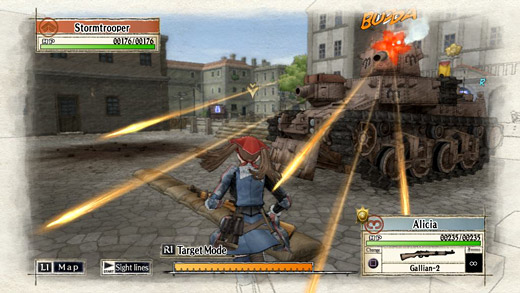 In other PS3 news, I started Valkyria Chronicles tonight, and although I'm quite early in the adventure, it's easy to see that it's definitely a quality undertaking. The action-oriented spin on traditional SRPG design is very much appreciated, and it's extremely easy on the eyes.

On the downside, the story (so far) hews closely to the typically cliché Japanese-Style Political Conflict outline that a lot of games in this genre share, but it's not terrible. There are also a few odd things about it, like the way only certain objects can be used as cover, or the way a defensive bonus granted by a blocking stack of sandbags remains in effect even if you sneak up behind the hiding person and take a shot squarely at the back of their head.

Even so, Valkyria remains a vitally fresh attempt in a genre that is especially stale, and it's definitely keeping my attention. One-hit-kills on my tank from behind are definitely a bummer, though.

…but I understand all of your complaints with it. What I felt Naughty Dog did well was establishing such a beautiful environment and compelling characters. Its musical score was also very good. However, I am also a person to whom the story and characters matter to me. I found Drake to be charming and funny, Elena, spunky, and Sully was just your typical shady character found in these adventure-type games. Granted, there wasn’t a lot of development for them through the story, but maybe we’ll see something new in Uncharted 2. I had friends who are big Tomb Raider fans… Read more »

I’m glad to see somebody agree with me on Uncharted: Drake’s Fortune. I just didn’t get why the game was constantly throwing enemies at me, especially given the clunky gunplay controls. And the platforming aspects of the game also left me cold. The only reason I own it because it came with a PS3 bundle and it looked like it could tide me over until the next Tomb Raider. (The next Tomb Raider turned out to be a better, but still underwhelming, game which took a few steps back from the peak that Legend had.) I also recently purchased Valkyria… Read more »

I liked Uncharted, myself. Short and sweet, I thought. But we all know I’m eternally un-jaded. 😀 Coincidentally I also just started Valkyria Chronicles, and I’ve only gotten through a couple missions but I’m already feeling hooked. I was afraid I wouldn’t like it but it’s got a definite charm. I look forward to obtaining the variety of characters and customizations at a later date. For the record I paid full price for Valkyria last fall; this is just the first I’ve had time to get to it. I understand it had a recent price drop, and some just-released DLC… Read more »