The Best Escort Mission that Ever was 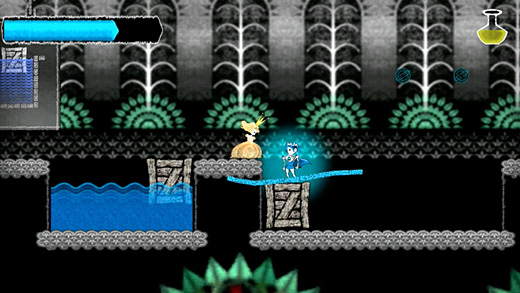 HIGH Completing the game without skipping any levels.

LOW The stages in area15 can be soul-crushingly difficult.

WTF why is using the water power so finicky?

As a games critic, all sorts of questions can pop up in the course of a normal day.

How should ethics be applied in the review sphere? Which rating scale makes the most sense? What are the differences between "journalists" and "writers"? Does anyone actually eat Doritos while drinking Mountain Dew? It's deep stuff.

However, after receiving review code for Dokuro, I was faced with an interesting question that's never cropped up for me before:

Where the hell did I leave my Vita?

It had been so long since I had any reason to use it, I'd put the unit away "somewhere safe" and had honestly forgotten where it was. Not even kidding. After an exhaustive search of my office and house, I located it and started hoping that the game would be good enough to warrant turning everything in both places upside-down.

Dokuro might be crudely summed up as twenty hours' worth of 2D escort missions, but that would be a criminal act of reduction. Instead of the annoying, frustrating experiences that escort missions usually are, I found Dokuro to be an adorably charming, incredibly clever game that takes a few simple concepts and explores their potential in every way possible.

The adventure begins with a demon lord kidnapping a princess to make her his bride. After she's abducted, a small skeleton minion takes pity on her, and perhaps falls a little bit in love. He decides to help her escape his dark lord's castle, but the place is filthy with enemies, traps, puzzles, and a host of other dangers capable of ending the fair maiden's life. Undaunted, the skeleton works to clear the path and eventually guide her to freedom. 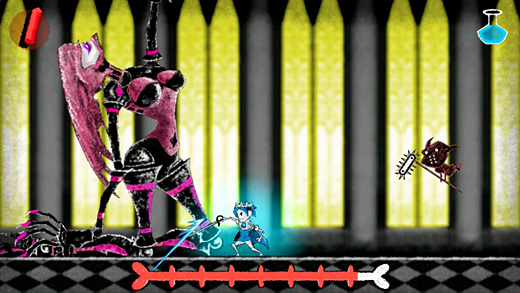 Things begin with basic one-step obstacles like detouring around pits that the princess can't cross, or flipping switches to lower bridges. After the first handful of levels, I think most players (including myself) would assume that they've got things all figured out, and that nothing but repetition lies ahead. That couldn't be further from the truth.

The beauty of Dokuro is that it takes the variables within its formula (skeleton, princess, obstacles, exit) and extrapolates them into every permutation imaginable. Once the basic elements become familiar, the developers twist, flip, and re-combine everything with admirable ingenuity. In this respect, their creativity is second to none.

For example, after mastering the various methods of getting the Princess to the exit moving from left to right, the developers then tilt things and ask the player to go from top to bottom. Some puzzles feature no real hazards, but challenge the player to figure out the correct sequence of moves. Others are gauntlets, requiring quick reflexes.

Every conceivable flavor of obstacle and problem comes into play. Balancing on scales, lighting torches to neutralize photosensitive enemies, timing a dash through flames, firing the princess from cannons, reversing gravity, swinging from ropes, floating on water, and more. I am hard-pressed to think of any puzzle game which pushes the limits of its design to the same degree that Dokuro does, and the resulting variety is remarkable.

Not content with the vast array of tasks laid out before the skeleton, the developers also twist how the player must think about the game. Often, the solution to a puzzle seems to be obvious… except it's not. A wall is just a little too tall, or a bridge can't quite cross a chasm. In Dokuro, the player has to forget "the rules" of puzzle games. In this world, boxes don't always line up squarely, taking damage can sometimes help, and the tools laid out to solve a problem aren't always necessary. After finding that answers can come from thinking laterally, my already-high respect for this title went through the roof.

There's a lot more to be said about Dokuro than what I've already written—I could talk about the wonderfully elegant art style, the charming character design, the ability to skip difficult sections, or the way each level is broken down into bite-sized chunks perfect for a handheld game, but I'd just be reiterating the same thing I've basically been saying all along—Dokuro is brilliant, and by far the best puzzle game I've played in quite some time. Rating: 9.5 out of 10.


Disclosures: This game was obtained via publisher and reviewed on the PS Vita. Approximately 19 hours of play were devoted to the single-player mode, and the game was completed. There are no multiplayer modes.

Parents: According to the ESRB, this game contains suggestive themes and mild fantasy violence. The violence consists of poking cartoonish enemies with a pointy sword and making them go "poof" or bonking them with a club. As far as "suggestive"… One character wears a tight leather-ish outfit, I suppose? Other than that, I've got no idea what the warning could possibly be for. Although it can be extremely difficult, the game's written as a slightly dark fairy tale. It's just fine for kids in terms of content, if you ask me.

Deaf & Hard of Hearing: I played the entire game without sound and had no problems whatsoever. Everything necessary for play is displayed on screen, and at no point did I find that audio cues were necessary. All dialogue (what little exists) is subtitled.