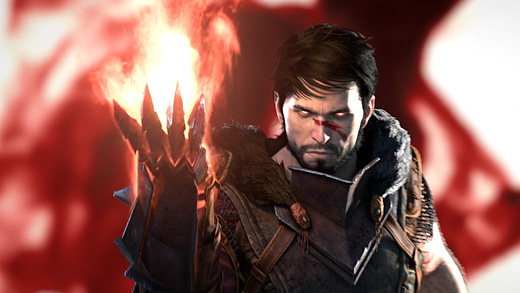 I had originally planned on posting a rant about Dragon Age II tonight, but the day didn't quite unfold the way I thought it would. So, although I don't have enough time to do a full-on posting at the moment, my conscience is screaming out to me that I need to do something in order to warn people against buying it.

I'll go into greater detail later on and I will be doing the full review, but for the moment let me just say that I think Dragon Age II is a colossal disappointment on an epic scale. After racking up around ten hours or so in the campaign, I can honestly say that I have nothing positive to report, and that there is absolutely no reason why anyone should waste their time or money on it.

Do not buy this game.

Considering that the original already bored me to tears, this is hardly surprising.

It does have an auto target feature, Joe. Default key is bound to F.

The reused environments and recycled dungeon layouts to me are the most unforgivable aspect of this game, imo.

I’m about 40 hours in and now into Act 3 and, honestly, at this point I’m thinking of quitting. :/ There are just too many little annoying things that have stacked up against my ability to enjoy it any longer.

There are demos available on the console and PC. I would recommend people try those first. I played a little bit of the PC version, and it plays alot like a console game, The tactical iso camera view (which made the first game better on the PC) has been completely removed. But the PC version does not have the auto targeting feature of the console game. So the pc game is a weird hybrid, where you have to click on everything (like an RTS or old school iso RPG) but you do it from an up close camera view (like… Read more »

I respect your evaluation but do strongly disagree with you.

Dragon Age 2 is a very decent game. Sure it lets its heritage down, it’s bland but it is definitely worth playing.
I’m not playing through it 4 times, i’m not buying the DLC (like Origins) – in fact i’m writing a sincere open letter to Bioware for whomever might care about that.
I have fun in Two Worlds II but I have more fun in Dragon Age 2 and I base that on rather common… might I say objective? parameters.
Disappointing Brad.

The Xbox version does sound pretty terrible, but the PC version is nothing short of excellent. it’s far more tactical and challenging on the highest difficulty. This just feels like a franchise meant to be played on a PC.

I had never played the first Dragon Age, so I decided to download the demo for this on the 360. Wow, just wow. Completely terrible. Combat literally consists of hitting one button. I haven’t played a Bioware game since Mass Effect (which I really enjoyed, by the way) and now I see why.

All the previews made it look terrible IMO, but the ‘professional’ reviews were all positive. Wasn’t sure if the negative reviews by users were just people who hadn’t played the game posting over and over.

I am enjoying it and am also about 10 hours in. It is a fun game and in my personal opinion it was well worth the money. Of course in a game this size 10 hours is a small sample size, but I have been given no hint that my enjoyment is unsustainable.

Could you have at least told me that on March 7th?!

When I read a review of it, my heart sunk.