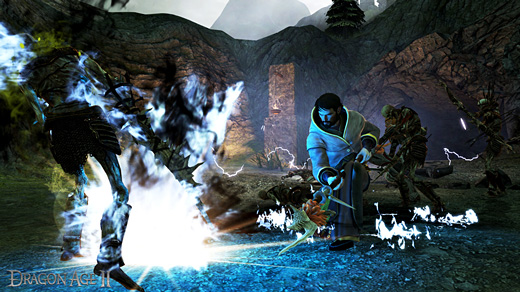 Sorry to end on a cliffhanger last time, but life can sometimes get in the way of leisure-time blog posting. You know how it goes.

So at this point, I'm about fifteen hours or so into the game. I am going to be doing a full review so I won't go into a great amount of detail here, but I will say that if I wasn't going to be submitting a formal review, I would have already quit the game and traded it in for something else. Not even kidding a bit.

In the interest of keeping things brief, here's a quick list of bullet points highlighting the issues I have with it:

There are other things I could bring up, but long story short, it's pretty obvious that development was massively rushed and a lot of shortcuts were taken with Dragon Age II.

Maybe if BioWare and Electronic Arts were more concerned with creating an experience that matched or surpassed the original rather than fast-tracking a sequel and spending all their resources on ridiculous DLC promotions, players might have actually gotten something that would have lived up to the big talk prior to release.

The drop in overall quality is staggering on a cosmic level, and there's no way I'd ever recommend anyone buying this game under any circumstances. For being such prestige players, BioWare and EA should be embarrassed and ashamed for turning out such a boring, tedious, poorly-crafted excuse of a game.

Dragon Age Origins / Awakening overall : 10/10, Dragon Age 2 : 7/10, im 34 hours into it, and I like it, I LOVED the first one, im not satisfied with this one though, and I wish that Bioware is gonna put more effort making the next one….

You and I are going to be at lagerheads here…you mean to tell me Mass Effect 2 was DUMBER than New Vegas? Seriously? I have owned and played both (PS3 version, full disclosure) and I thought New Vegas was one of the least immersive, most pointless poor excuses for a sequel I’ve seen. I loved Fallout 3 and liked Oblivion so I’m not a Bethesda hater, but seriously man, nothing New Vegas purported to do it actually did. The faction system was BS, the story was non-existant and the ending was such crap a child could have written it (a… Read more »

Everything you are finding wrong with DA2 I found wrong with DA:O, tho DA:O is a bit more polished story wise its still a complete mess.

I agree with some of your points Brad, especially about the repeated environments and lack of companion customization, but I don’t think you are giving Dragon Age 2 much of a chance. Saying the that combat in Dragon Age II is broken, when compared to the first game, is an insult. Granted that I have only played the game on the 360, so I haven’t experienced the “amazing” tactical options that PC gamers seem to have enjoyed in Origins. But the combat in Origins was dreadful. Every encounter was a long, drawn out slog through repetitive enemies that stopped being… Read more »

I’ve just reached the third act and I’ve quite enjoyed the game so far in spite of most of the complaints here. The repetetive environments and zerg enemy mechanic being the worst. I do however disagree with calling the characters poorly written. The in media res intro struck me as quite interesting, reminiscent of Prince of Persia: Sands of Time. I did however find that the look of some of the characters is a bit silly. Isabella looks like a pubescent fantasy and Fenris like he escaped from a JRPG. Talking to the companions is also not implemented as well… Read more »

So, does 15 hours in mean you’ve already finished Act1 (done the expedition)? Looking at my 10h save it could very well be that 15h are just the first act. And yes, that one’s terrible, completely in line with what’s in the article. Those were exactly my impressions, minus the loading times (not as long on pc) and the attack button spamming (give order, character keeps attacking without clicking again). I’ve always hated it when someone told me “it get’s better later”, but in this case i’d say it, too. Act 2 and 3 have better story, companion quests and… Read more »

Remember back in the 90’s when we all couldn’t wait for gaming to go mainstream like movies? …thinking “oh man, we are gonna get such SWEET games when the big $$$ are gettin invested” Well they’ve gone mainstream… and it’s just like the movies – with all the $$$ required and a handful of big investor driven companies dominating, we’re seeing 2 or 3 cool blockbusters, a pretty decent amount of clever low budget flicks, a truckload of cliche ridden crap designed to sell a lot of tickets in the first few weeks and CRAPPY SEQUELS trading on a franchise… Read more »

Good point about Awakening. I was starting to hope that maybe DA2 was just another Jade Empire for BioWare but clearly something is amiss here with the company. Former EA execs have a lot of bad things to say about EA. Glancing at a lot of EA’s non-sports releases in recent years and it looks an awful lot like something is terribly wrong with that company in terms of managerial competencies. The Old Republic is a major gamble. If it works out well, BW will be making money hand over fist. If it doesn’t, well, the company may simply not… Read more »

@Chris Cziborr Yeah the BioWare forums are overloaded with angry people, and I’m not even talking your typical internet moaners that you get with any game, I’m talking like pages upon pages of threads asking how BioWare have gone so wrong. It’s good to see your enthusiastic about the things you pointed out that seem to be getting through on the forums, but if you go back a bit further you’ll see BioWare actually did a similar thing when they released Awakening. That game/expansion was just as unfinished as DA2 is, so they clearly didn’t learn anything there. They rushed… Read more »

I didn’t buy the game, only played the demo for PC and PS3 version. While DA2 on PC played like a watered-down version of Origins, it was very weird on the PS3. It felt like how someone might think God of War plays if he only knows it from stories told by people who don’t like God of War. It was only mashing buttons until everything falls over. The combat got so boring, I didn’t even finish the demo on the PS3.

Wow, I really have to say I cant disagree with this even for a second. I know some would dismiss it as being melodramatic and over the top, but I agree 100%. The game simply is THAT bad. And not just because its Bioware making a bad game either. This game would be atrocious no matter the reputations attached. First Mass Effect 2 and now this. I cant see much bright in the future for Bioware, at least for me as a gamer. Im fully expecting a repeat of the dismal dumb experience of ME2 with ME3, possibly with competative… Read more »

For people hungry for more Dragon Age, I agree that this game should be skipped entirely. Instead of wasting good, hard-earned money on DA2, I recommend starting a new character/race/etc on DA:O and simply playing that again from the beginning. There is no comparison between the two games. DA:O is a classic, while DA2 is fast becoming a cautionary tale for developers and publishers tempted by greed to rush an undercooked game to market. What a disaster. I believe there is a silver lining here. I spent a lot of time last night scouring the BioWare forums and other places… Read more »

I had decided that I was going to do that and then, on Friday, I bought it on the spur of the moment. What a mistake. Your synopsis encapsulates almost exactly my own experience. I’m about ten hours into it and it feels like: 1. An unrelated series of fetch quests. 2. The characters have no real impact on the story. 3. There IS no story to speak of. 4. The combat is mind-numbingly boring. I found myself yawning once during a fight when I was mashing the A button. Yawning. Any way, thank you for putting up your first… Read more »

Completely agree with you Brad, and unlike last time where I had the advantage of playing the PC version of Origins, this time it makes no difference; the game isn’t great, either way. Problem is, I still bought it. And I shouldn’t have – just like you said not to. £30 down the crapper. Don’t know if I can ever force myself to even play it to get my money’s worth. I just have no desire for it at all. Not good. =S Also gotta say that having on-day DLC that isn’t on every disc is still as annoying as… Read more »

I hate to say it, but I agree with almost everything you said. I’m currently 12 hours into it. And I am still questioning the reason why I am running around doing all this crap. It’s like everything has no value or impact. Also, a glitch happened in my game, where I accepted an award after a quest.. and I hit the button twice, and I got the reward two times. Then I kept hitting the button and I got endless money and EXP.. so I am currently at level 40 with all skills I am interested in unlocked lol.… Read more »