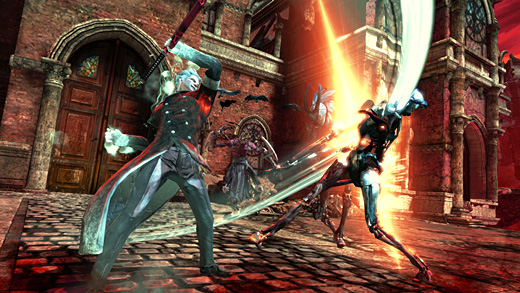 HIGH Seeing that Vergil has his own fully-developed skill trees.

LOW Too many of those irritating Wisps.

is story-based downloadable content (DLC) that begins immediately after the ending of DmC: Devil May Cry and continues the plot of Ninja Theory's superb revamp right where it left off.

Those who've rolled credits on the campaign will remember that it ended with Dante's twin brother limping away from the final conflict, seriously wounded. As Downfall starts, Vergil actually dies from his injuries and is immediately sucked into hell to do battle with his inner demons.

Although the premise may sound a bit cheesy, the attempt to give some insight into Vergil was handled well enough, and was consistent with what was established beforehand. I also appreciated that this add-on wasn't just a collection of skill tests or other such random bits and bobs. Out of all the different kinds of DLC, those that legitimately continue a story I enjoyed are my favorite.

Downfall is divided into six levels and will take players somewhere in the neighborhood of three hours to complete the first time, with additional play coming from new difficulty levels, searching for pick-ups, and unlocking Vergil's abilities. And oh, those abilities…

Vergil possesses a fully-developed skill-tree similar to what Dante sports in the core game, and when it was all opened up, I was impressed. Even more impressive was how different the two brothers feel in combat. 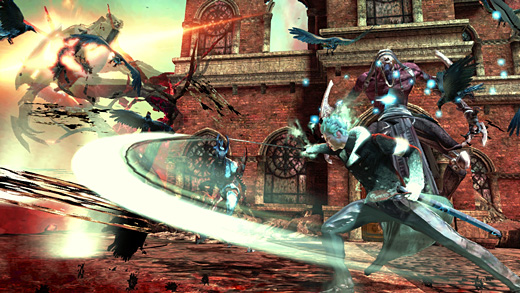 The most obvious difference is that Vergil uses a katana-like sword, and although he only has the one weapon, it gets the job done. In addition to combos and aerial moves, the blade has Demon and Angel aspects that can be triggered on the fly, he can toss copies of it psychokinetically, his Devil Trigger is a rotating blade shield, and he can also summon a doppelganger for double damage. They may be twins, but there's no question that Dante and Vergil are far from a simple palette swaps.

However, despite my satisfaction with Vergil as a standalone character, Downfall isn't quite the home run that the main game is.

While putting him through his paces is fine at first, the overall selection of enemies is lacking, and the new birdlike "wisps" are both too annoying and too common. Things slide slowly downhill as the levels go on. Rather than the intricately orchestrated dances of the core game, Downfall's skirmishes become about surviving large mobs. This "more enemies" approach lacks the sort of balance and nuance that the main game has in spades.

The pace of the narrative is also strange. The "final" boss encounter comes a level before the end, while the actual last level is just fighting another mob. Arranging things this way  was a real head-scratcher.

On a technical note, I noticed a significant lag when trying to travel through the "warp" gates between areas. This lag was so bad that I thought my console froze up or that the DLC glitched the first few times I tried to go through.

While DmC: Devil May Cry—Vergil's Downfall

is exactly the kind of story-based DLC that I enjoy the most and getting a new slice of a fantastic game like DmC: Devil May Cry is always welcome, this add-on could have gone from "okay" to "outstanding" with just a little more work. I like Vergil and I definitely want to see more from these brothers, but this particular side story doesn't quite manage to catch fire. Rating: 6.5 out of 10.


Disclosures: This game was obtained via publisher and reviewed on the Xbox 360. Approximately three hours of play were devoted to the single-player mode, and the content was completed. There are no multiplayer modes.

We seem to have different criterion for DLC. Vergil’s Downfall is extra levels that feature a new or extra character. That’s all I really expected from DLC for the game and that’s what you get. If it were just more of DmC then I’d have a problem with the limitations and reuse of parts of DmC. As it is I think its a nice diversion.