So Close, and yet so Far… 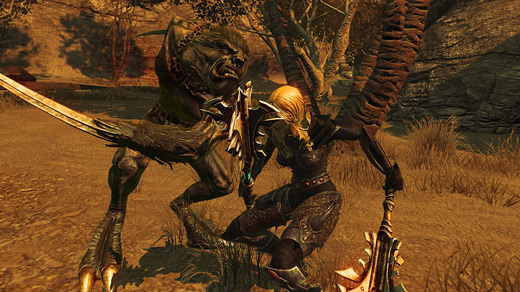 HIGH Realizing how deep and expansive the game actually is.

LOW It takes way longer than expected to become a dragon.

WTF The final third of the game risks overshadowing all that's good about the rest.

Haven't heard anything about Divinity II: Ego Draconis? That's all right, I hadn't either until about a week before the review copy arrived on my doorstep.

Walking into the game with essentially no information or expectations, I was surprised to find what will undoubtedly be one of the deepest, most elaborately-constructed and intelligent role-playing games (RPGs) released this year… and also one of the most fatally flawed. It's rare that such a dichotomy of highs and lows exists in the same title, but this is indeed the case. It's tragic, really—if not for a series of extremely poor choices made in the final third of the adventure, I'd be singing this game's praises without reservation.

As the adventure begins, this third-person Action-RPG puts the player in the role of a Slayer, one of an order of knights on a mission to destroy the last living dragon. After creating a character and choosing between archer, mage, and warrior, things get off to a humble start in a small village—just a few houses, and a couple of people to talk to. However, it's not long before the player is released into the world proper and begins to realize just how massive Divinity II actually is.

Although each of Divinity II's three major areas are discrete and nowhere near the size of the tracts found in something like Fallout 3 or The Elder Scrolls IV: Oblivion, they are constructed in such a way as to deliver an open-world experience that is not only comparable in terms of intricacy and depth, but actually surpasses them in certain ways. Wandering the land and investigating things that pique a player's curiosity will reveal more quests, more secrets, more treasure, more options, more darkly humorous writing and more interesting situations than nearly any other RPG of its type. For players who like to dive into a fantasy world and get totally submerged in what it offers, welcome to the Marianas Trench.

Divinity II is also notable for more than just its volume and quality of quests. Although it may appear at first to be somewhat traditional in design, Larian has incorporated a number of updates, interesting twists, and variations on themes that give the game its own identity. For example, after completing a quest, players have a choice between gold, extra experience, or rare items—a rarity on consoles. Another example, the main character can choose to read the mind of any NPC they meet. It costs experience points (to discourage spamming) but it often leads to extra stat-ups, hidden treasure, or alternate ways of solving a problem. I have yet to mention the flexible skills system, the build-an-undead-sidekick feature, or a dozen other instances where the game iterates or completely revamps systems that have remained untouched in the genre for years. I greatly appreciated these fresh, genuinely thoughtful approaches.

However, such superb role-playing is exactly what makes the developers' later missteps so impossibly hard to swallow. In Divinity II's case, the player begins the adventure as a Dragon Slayer but ends up a Dragon Knight—a shape-shifting warrior able to turn into a flying, fire-breathing dragon. Unfortunately, after achieving what should be a major high point in the story, the developers made a series of unexpectedly catastrophic errors in design that gutted the level of enjoyment. 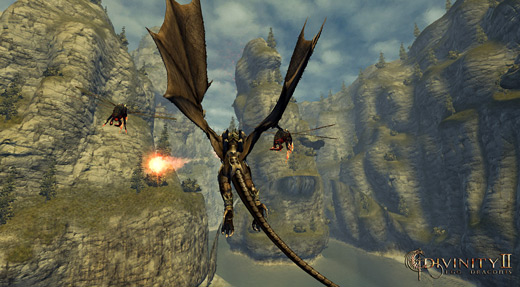 My first warning came immediately after transforming the first time. Rather than letting me revel in this new ability, I was instead thrown into a harsh battle where I discovered that the dragon is a lot more fragile than one would expect. Following that frustrating section, the next major area of the game's world was full of enemy generators, ballistae shooting projectiles, and incredibly cheesy "anti-dragon" force fields that clog up the skies and sap all feelings of airborne majesty. It's ridiculous, disappointing stuff.

It was also hard to swallow the jagged disconnect between the dragon and the world itself. In flight, enemies on the ground vanish. When in human form, all flying enemies disappear. On top of that, areas previously available to the player suddenly become covered with "poison fog" that prevents the dragon from flying low or landing. The story tries to explain it away as the evil overlord razing the land, but when viewed as a whole, it seems clear that the developers failed to find a way to successfully mesh the dragon with the rich, complex ground environments. Instead, they chose shortcuts and partitioned huge amounts of content away from the player to avoid the problem altogether. Further evidence of this can be seen in the final area of the game which is radically different in topography and design—ostensibly to make concessions to the dragon's limited functionality. For something so central to Divinity II's identity, I was bitterly disappointed at how crippled and ill-formed this key element was.

Although I try to avoid laundry-listing in my reviews, there's one more item to mention: how the game handles difficulty in relation to the player's level. Rather than the standard increase of challenge on par with a character's growing abilities, Divinity II takes a very black-and-white approach: If a player enters an area below the "proper" level (let's say level 19) the damage dealt by enemies is absurdly high. Entering the same area above the threshold (perhaps level 20 or 21) makes the player practically invincible. It wasn't an issue for most of the game, but as I drew closer to the end this system became more and more apparent. The most painful example was when my attempt at the final battle ended with the boss consistently one-shot-killing me… in under one second. There was a ludicrous amount of difference between being level 31 (not remotely do-able) and level 33 (cakewalk) and there was no way to know what level was "right" until it was too late. This brick-wall system was tolerable early in the adventure when I had multiple locations to visit, but if this was the devs' way of telling me they wanted me to do more questing before moving on to the endgame, they shouldn't have made so much of it optional.

As I said at the opening of this review, it's extremely rare to find a game that excels so superbly in certain areas while stumbling so hard in others. However, that's exactly what's going on with Divinity II: Ego Draconis. Everything that happens on foot prior to earning the dragon transformation is richly brilliant and totally engaging. Quality work on many levels, a lot of other RPGs could take lessons from what's on display. Sadly, things fall apart when the action moves to the skies, and the harsh experience-level system that delivers death quickly and repeatedly only rubs salt into the wound.

For adventurous players willing to remain undeterred by warts and wrong turns, Divinity II is something quite special—an RPG with a flavor all its own, and one not to be missed. Those who have less patience and a lower tolerance for frustration should probably approach it with caution (and maybe an FAQ.) Rating: 7.0 out of 10.

Disclosures: This game was obtained via publisher and reviewed on the Xbox 360. Approximately 37 hours of play were devoted to the single-player mode, and the game was completed. There are no multiplayer modes.

Parents: According to the ESRB, this game contains blood, suggestive themes, and violence. Many of the themes and situations here are certainly oriented at adults, not because anything is explicit or especially graphic, but the humor is often dark and the general tone of the adventure in this game is aimed squarely at players who are "of age."  Although the general difficulty will stymie most kids, parents should probably discourage those young ones who feel like they are up for the challenge.

Deaf & Hard of Hearing Gamers: YOu shouldn't have any difficulty. All dialogue in the game is subtitled, and information during play is displayed on-screen via text pop-ups or through a map that explicitly shows the location of enemies and friendlies nearby. There are no audio cues necessary for gameplay.

Hi Zelazny, I have heard that people had several buggy experiences with the game, but I didn’t notice anything during gameplay outside of the odd piece of walking collision or sketchy animation here and there. It was all pretty minor stuff on par with what you would expect from any mid-grade PC port. Although everyone’s experience might be a little different, I didn’t see anything worth reporting. However, I did notice the saving glitch that occurs when you save over a previously-used save slot. I contacted the publisher right away when it happened, and they said they were working on… Read more »

Bugs? The only thing preventing me from picking up this game when it finally becomes a budget title are the reports of all the game-breaking bugs and glitches. Did you encounter any of these during play? Of particular note is the infamous save glitch. Since there is scant mention of these bugs, I’m curious if you recieved a different version or if maybe you patched it via xbox live.