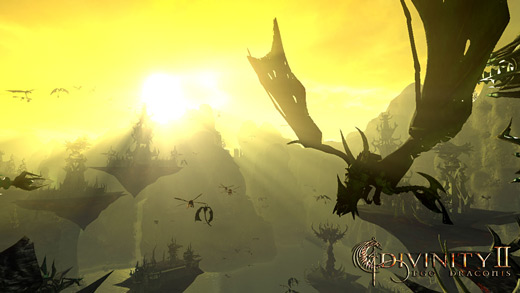 So, I've been putting in a lot of hours with Divinity II: Ego Draconis, but tonight I sincerely contemplated quitting the game in a blind rage and walking away from it, despite making it all the way to the last boss.

It's a shame, since I've sincerely enjoyed the vast majority of it. A lot of it is just flat-out brilliant, really. Most of what takes place on the ground is interesting, intricate, detailed and fresh enough to keep my attention despite having recently played through three other RPGs in the last couple of months. However, not everything takes place on the ground.

Put simply, the dragon parts of the game just suck. At no point do you ever have the advantage of being an airborne blowtorch, raining death from above. Instead, the developers chose to stuff each area full of all kinds of bogus anti-dragon weaponry that basically makes every second a desperate struggle for life. I had been greatly looking forward to "earning my wings" in this title, and once I had them, I wanted to hand them right back. I never would've predicted how completely non-fun this aspect of the game is, but it's basically the opposite of enjoyment. Slogging through these dragon parts has been painful.

Having gritted my teeth and powered through, I thought the worst was behind me, and I was looking forward to watching some credits roll this evening, but wow… was I mistaken.

One aspect of Divinity II that I have not seen discussed in any of the reviews I've read is that the game takes a very stark approach towards the level of the player's character. If you are below the level the developers think you should be, you take excessive amounts of absurd damage and die in a heartbeat. However, if you enter the same area above this "correct" level to be at, then you're effectively invincible. It's not a matter of being tough enough to survive, it's more like a difference of night/day or black/white. You can either do it or you can't, and it's extremely rare that you can be under-leveled and push through.

The system has been on display for the entire game and for the most part, it hasn't been too bothersome. With plenty of places to explore, it was always very easy to pick a different location that was at a more appropriate level rather than die and reload dozens of times in a spot that was too tough. However, during tonight's session I was able to make it all the way to the last boss only to find that he was able to one-shot me in (literally) less than one second.

Obviously, my level was too low.

This was incredibly frustrating for a number of reasons, first and foremost that I feel that if I was able to make it to the boss in the first place, that he should have been manageable—especially since the area that he's in is impossible to leave once entered. I very nearly erased my only salvageable game save, and if I actually had, then I would've been completely unable to finish the game and been left with no way to continue. The fact that that was even a possibility is terrible game design, and incredibly disrespectful of the player.

It was also frustrating because I feel like I'm ready to be done with the game, and I have the developers holding me back for what amounts to 'just because'. There is no real rationale for forcing me to keep leveling even though I've completed the critical path. If they were so desperate to have me see all the extra content they created, then it should've been part of the required play and not categorized as optional. This kind of heavy-handedness was not nearly as apparent earlier in the game, since I was wrapped up in exploring the world. I naturally worked with the system since I played in a semi-completist fashion, but now that my path is clear and I've done everything I felt like I needed to do, it's just an obstruction that's rapidly degrading the amount of respect I have for the title.

After venting on Twitter and taking a few hours away, I decided to give it one more try and see if I could earn another level or two over the next few days. I'd hate to walk away from the game at this point, after having worked so hard and done so much, but it's as though the developers are working overtime to try and make me as irritated and unhappy as possible.

When creating challenges, it shouldn't be the developer versus the player… it's unfortunate that Divinity II's developers don't seem to understand this particular lesson. Take away the game's overly-aggressive death-dealing and what remains could have been a masterpiece, of sorts. As it stands, it's a severely flawed title that could've been so much more.

It’s good to see there are still other gamers out there that recall how gaming used to be. It’s sad that so many games have catered to players that don’t want to have to think. Seems so many players want to load up a game and wander around killing anything they come across and get upset that they die when they attack something well over their level. *sigh* This is why it’s rare to come across a rpg where you actually have to use your mind to determine your next move. I know right?! How dare a game expect you… Read more »

Just to put this out… I notice right away that there was a leveling issue here, im no noob to rpg and i know that if you can play your caracter well you can go a long way under leveled and under geared But at level 6 i am sent to “lovis” only to find the area is literally SWAMPED with level 8’s and even a level 11. So basically my whole tactic was to aggro 1 or 2 adds and hope that i could finish them off with enough health to live, then save game and repeat. But i… Read more »

Regarding getting to the end boss and being killed in one hit – I think that this is the way a role playing game is supposed to be. Some areas are too difficult at the moment but one can go out and grind, do other things and then return and pull it off. I litterally hated Oblivian for its child friendly approach of always keeping the enemies at the same (almost) level at yourself making grinding and gathering experience pointless. Most roleplaying games these days are made easy by big flashing red arrows pointing exactly where to go and what… Read more »

When I first encountered MMOs that demand you be within ~3 level range from your chosen prey, I was flabbergasted. When over half your attacks miss or you can’t afford to take one hit, due to no quantifiable problem with stats, it’s just frustrating. It just smacks of lazy developers that don’t want to deal with balancing difficulty, so they let the player self-organize into fighting things that will present them with no real challenge or need to tweak any stats to succeed. The locked-down end area is really just as bad as their misreading what sort of shape people… Read more »

You’d think after all these years developers would have a good grasp of how to balance a game’s difficulty, but still we’re given games that use cheap and/or cheating AI, overpowered enemies, and – in this case – a requirement to be at a certain level to proceed. How hard can it be to balance a game properly? Seriously. Aside from the notion that sending you 10-20 minutes back to the last checkpoint with respawns undermines what I’m about to say – Demon’s Souls does, at least, allow you to defeat any (or most) opponent regardless of level/gear/abilities. Sure, having… Read more »